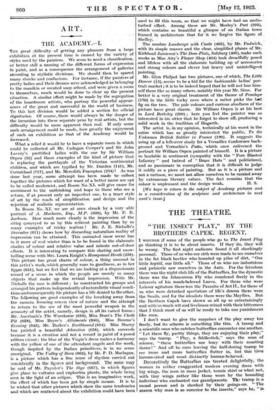 THE great at of getting any pleasure from a large

exhibition at the present time is caused by the variety of styles used by the painters. We seem to need a classification, or better still a naming of the different forms of expression in paint, and as a consequence the arrangement of galleries according to stylistic divisions. We should then be spared many shocks and confusions. For instance, if the painters of pretty ladies and their dresses were acknowledged as belonging to the manikin or scented soap school, and were given a room to themselves, much would be done to clear up the present situation. A similar effort might be made by the segregation of the boardroom artists, who portray the powerful appear- ances of the great and successful in the world of business. To this last division would be added a section for official dignitaries. Of course, there would always be the danger of the incursion into these separate pens by real artists, but the difficulty would be more apparent than real. If only some such arrangement could be made, how greatly the enjoyment of such an exhibition as that of the Academy would be increased.

What a relief it would be to have a separate room in which could be collected all Mr. Cadogan Cowper's and Sir John Lavery's prettified ladies with the one by Sir William Orpen (52) and those etamples of the kind of picture that is replacing the portitayals of the Victorian sentimental children, and which are typified by Mr. Durden (141), Mr.

Carmichael (717), and Mr. Meredith Frampton (254) ! As was done last year, some attempt has been made to- collect together the pictures which for want of a better name are apt to be called modernist, and Room No. XI. will give cause for merriment to the unthinking and hope to those who see a return, if at present only an imperfect one, to a truer style of art by the roads of simplification and design and the rejection of realistic representation.

Jackson. How much more clearly is the impression of the sitter qonyeyed to us by this reticent painting than by so many examples of tricky realism ! Mr. J. E. Nicholls's

December (011) shows how by discarding naturalism reality of

impression can be attained. This animated snow scene has in it more of real winter than is to be found in the elaborate studies of colour and relative value and minute out-of-door

effects. It is interesting to compare this skating and snow- balling scene with Mrs. Laura Knight's Hampstead Heath (238).

This picture has great charm of colour, a thing unusual in this artist's work, which generally runs to gaudiness, as in her figure (651), but we feel that we are looking at a dispassionate record of a scene in which the people arc merely so many objects that make up the retinal impression. With Mr. Nicholls the case is different ; he constructed his groups and arranged his pattern independently of naturalistic visual condi- tions and consequently his picture has a life denied to the other. The following are good examples of the breaking away from the camera focusing screen view of nature and the attempt to return to the use of the most powerful weapon in the armouty of the artist, namely, design in all its varied forms :

Mr. Auerbach's The Warehouse (610), Miss Bunt's The Chalk Pit (618); Miss Bryce's Allotments (640), Miss Bourne's Evening (645), Mr. Barker's Earthbound (684). Miss Stacey has painted a beautiful Adoration (658), which succeeds because it is a creation and not a record in paint of a posed tableau vivant ; the blue of the Virgin's dress makes a harmony

with the yellow of one of the attendant angels and the work,

though inspired by the Italian primitives, is in no sense unoriginal. The Valley of Baca (662), by Mr. P. D. Maclagan,

consistently in the figures and background. The same may be said of Mr. Paynter's The Styx (667), in which figures give place to vultures and euphorbia plants, the whole being seen in the light of an eclipse. This is an imaginative work, the effect of which has been got by simple means. It is to be wished that other pictures which show the same tendencies and which are scattered about the exhibition could have been used to fill this room, so that we might have had an undis- turbed effect. Among these are Mr. Morley's Poet (393), which contains so beautiful a glimpse _ of an Italian town framed in architecture that for it we forgive the figure of Shelley.

The sombre Landscape with Castle (403), by Mr. Padwick, with its simple masses and the clear, simplified planes of Mr. Kirkland Jamieson's The Dom-Plaz, Salzburg (406), make such works as Miss Airy's Flower Shop (404) look dreadfully posed and lifeless with all the elaborate building up of accessories and strong colours and clever but heavy and unintelligent painting.

Mr. Glyn Philpot has two pictures, one of which, The Little Dancer (15), seems to be a bid for the fashionable ladies' por- trait market ; it is to be indeed hoped that he will not lose him- self there like so many others, notably this year Mr. Sims. Far better is a very original treatment of the theme of Penelope (170) in the little rocky cove where a suitor picks the last fig on the tree. The pale colours and curious aloofness of the , picture have great charm. Sir William Orpen is at his best in Lord Berkeley (290) ; here you feel the painter was so interested in his sitter that he forgot to show off, producing a solid work in the tradition of Hogarth.

The artist is, in my opinion, technically at his worst in the satire which has so greatly interested the public, To the Unknown British Soldier in France (190). It suggests the using up of a left-over study for a Versailles Conference back- ground and Vcrrochio's Putto, which once enlivened the portrait Sir William Orpen painted of himself. It is a picture so laudable in sentiment (sympathy with the " Pore Blasted Infantry " and hatred of " Brass Hats " and politicians), and so passionate in conception that it is difficult to judge it coldly as a piece of painting. But as it is a picture and not a cartoon, we must not allow ourselves to be carried away by extraneous literary values. The fact remains that the

colour is unpleasant and the design weak. H. S. [We hope to return to the subject of- Academy pictures and to a consideration of the sculpture and architecture in next week's issue.]