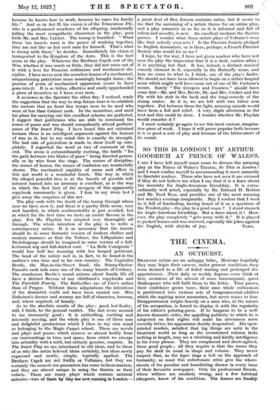 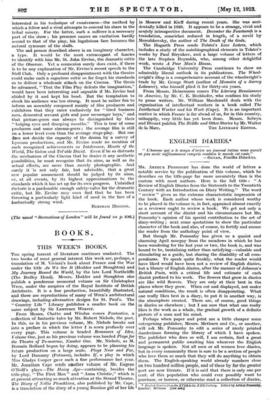 DRAMATIC cities are an unhappy tribe.. Howevcr hopefully they may begin their careers, under present conditions they seem doomed to a life of foiled waiting and prolonged dis- appointment. .,Their daily or weekly dogmas come thick at first, credulous of the advent of some transmigrant, _queer Shakespeare who will fulfil them to the letter. Time passes, their confidence grows tame, their once whole _enthusiasm is partitioned into various sets of temperamental oddities which the aspiring actor memorizes, but never ceases to fear. Disappointment weighs heavily on a man who, in the nature of his occupation, is forced to display it with the regularity of his editor's printing-press. If he happens to be a well- known dramatic critic, the appalling publicity to which he is subjected on first nights will make his utterances more covertly bitter, his appearance doubly despondent. His open- minded readers, satisfied that big things are astir in the theatrical world so long as the accustomed column lacks nothing in length, may see a vitalizing and kindly intelligence in his every phrase. They are complacent and short-sighted, these good people ; all they require is that the wares they pay for shall be usual in shape and volume. They never suspect that, as the leper rings a bell on the approach of humanity, so must this unfortunate critic give the where- abouts of his peculiar and humiliating disease in every issue of their favourite newspaper. Only his professional friends, whose withers are similarly wrung, and a few habitual playgoers. know of his condition. The former are frankly

interested in his technique of evasiveness—the method by which a fellow and a rival attempts to conceal his share in the tribal misery. For the latter, such a sufferer is a necessary part of the show ; his presence causes an excitation hardly second to that of the play, his lugubrious face becomes the natural cynosure of the stalls.

The sad person described above is_ an imaginary character, a type. It would be the most extravagant of fancies to identify with him Mr. St. John Ervine, the dramatic critic of the Observer. Yet a connexion surely does exist, if there is to be any explanation of Mr. Ervine's recent speech to the Stoll Club. Only a profound disappointment with the theatre could make such a sagacious critic so far forget his standards as to deliver a wholesale attack on the Cinema. The thesis he advanced, " That the Film Play defeats the imagination," would have been interesting and arguable if Mr. Ervine had abided by it and kept his head. But the temptation to shock his audience was too strong. It must be rather fun to inform an assembly composed mainly of film producers and exhibitors that they cater exclusively for " tired business men, demented servant girls and poor messenger boys," and that picture-goers can always be distinguished by their " bulging eyes and drooping mouths." This is true of some producers and some cinema-goers ; the average film is still on a lower level even than the average stage-play. But one does not decide the capacity of the drama by a survey of Lyceum productions, and Mr. Ervine made no mention of such recognized achievements as Intolerance, Hearts of the World, The Golan and Tor able David. Even if he so distrusts the mechanism of the Cinema that he denies it any aesthetic possibilities, he must recognize that its aims, as well as its actual effects, are more than merely photographic. And surely it is not only fair, but advisable, that a great new popular amusement should be judged by its aims, or, at all events, by its highest approximations to the standards which it has set up for its own progress. Unbridled rhetoric is a pardonable enough safety-valve for the dramatic critic, but Mr. Ervine may soon find that he has been throwing a particularly light kind of sand in the face of a barbarically strong wind.