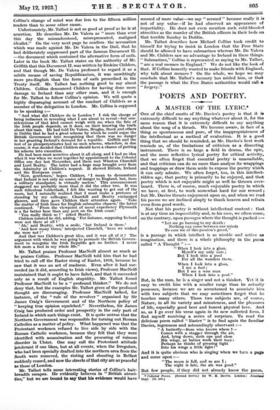 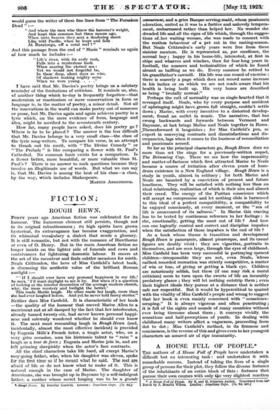 A MASTER OF THE LYRIC.*

ONE of the chief merits of Mr. Davies's poetry is that it is extremely difficult to say anything whatever about it, for the same reason that it is extremely difficult to say anything about the song of a thrush. We become aware, in face of a thing so spontaneous and pure, of the inappropriateness of the intellectual as a method of evaluation. It is a good thing that we should be reminded, as Mr. Davies's best work reminds us, of the limitations of criticism as a dissecting instrument. There is so large a field in drama, the epic, and the more reflective lyrical poetry for critical activity, that we often forget that essential poetry is unassailable, and that criticism can do no more than analyse its wrappings and trappings or draw them aside to expose the poetry which it can only admire. We often forget, too, in this intellect- ridden age, that poetry is primarily to be enjoyed, and that poetry which is not enjoyable might as well be thrown over- board. There is, of course, much enjoyable poetry in which we have, at first, to work somewhat hard for our reward ; but Mr. Davies thrusts enjoyment upon us, and when we read his poems we are inclined simply to thank 'heaven and refrain even from good words.

Not that his poetry is without intellectual content : that is at any time an impossibility and, in his case, we often come, on the contrary, upon passages where the thought is packed :—

" Let me go burning to my death : Nothing can come between our minds To ease me of this passion's greed," is a passage in which intellect is as nimble and active as imagination, and there is a whole philosophy in the poem called " A Thought " :— " When I look into a glass,

Myself's my only care ; But I look into a pool For all the wonders there.

When I look into a glass, I see a fool : But I see a wise man

When I look into a pool."

But, in the sum, he is a singer and not a thinker. Yet it is easy to credit him with a smaller range than he actually possesses, because we are so accustomed to associate him with two subjects that we may sometimes forget that he touches many others. Those two subjects are, of course, Nature, in all its variety and minuteness, and the pleasures of life, especially good beer and honest physical love. And so, as I go over his verse again in its new collected form, I find myself receiving a series of surprises. To read the delicious poem called " Easter " is to find again the familiar Davies, ingenuous and astoundingly observant :— " A butterfly—from who knows where ?- Comes with a stagger through the air, And, lying down, stagger ope and close

His wings, as babies work their toes : Perhaps he thinks of pressing tight Into his wings a little light!"

And it is quite obvious who is singing when we turn a page and come upon :—

But few people, if they did not already know the poem, • eak.:fra Pawn. (Second Series.) By W. H. Davies. London Jonatbarr Cape. Ps. net.] would guess the writer of these tine lines from "The Forsaken Dead " :— " And where the men who threw the hammer's weight, And leapt this common but three moons ago, When unto heaven they. sent a deafening shout Like wild Pacific, when he leaps and falls At Raratonga, off a coral reef ? "

And this passage from the end of " Music " reminds us again of how much he includes :-

" Life's river, with its early rush, Falls into a mysterious hush When nearing the eternal sea : Yet we would not forgetful be, In these deep, silent days so wise, Of shadows making mighty noise When we were young. . . ."

I have said that Mr. Davies's poetry brings us a salutary reminder of the limitations of criticism. It reminds us, also,

of another thing which to-day is frequently forgotten—that modernism or reactionism or mere conservatism in form or language is, in the matter of poetry, a minor detail. Not all the innovations in the world can make poetry out of nonsense or prose, but Mr. Davies again and again achieves poetry in a lyric which, on the mere evidence of form, language and idea, might be ascribed to the seventeenth century.

How far, many people have asked, does his poetry go ? Where is he to be placed ? The answer is the less difficult that Mr. Davies belongs to a very small class—the class of the lyric song-writers. To compare his verse, in an attempt to thrash out his merit, with " The Divine Comedy " or " The Prelude " is like comparing a flower with St. Paul's Cathedral. No common basis exists for a comparison. Is a flower better, more beautiful, or more valuable than St.

Paul's ? There is no answer to such questions because they involve an illegitimate use of words. But what we can say is, that Mr. Davies is among the best of his class—a class, by the way, which includes Shakespeare.