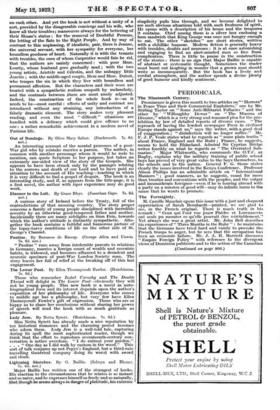 Prominence is given this month to two articles on " Horrors' in Peace Time and their Commercial Exploiters," one by Mr. Stirling Taylor on " Some Anti-Militarist Fallacies " and the ether by " Willoughby Dewar" on " The Miasma of Divorce,' which is a very strong and reasoned plea for the pro- hibition by law of detailed reports of divorce cases. " The reproach of having the lewdest newspaper Press in civilized Europe stands against us," says the writer, with a good deal of exaggeration ; " disinfection will no longer suffice." Mr. F. J. P. Veale states what he regards as " some plain truths " about France, England and the Ruhr ; France, he suggests, means to hold the Rhineland. Admiral Sir Cyprian Bridge writes forcibly on what he regards as " The Overrated Sub- marine." Major Whitworth, who commands the O.T.C. at Rugby, explains why the military training of public school boys has proved of very great value to the boys themselves, to the schools and to the nation. General F. G. Stone states clearly the issues involved in the Kenya Conference. Professor Alison Phillips has an admirable article on " International Manners " ; good manners, as he suggests, count for more than treaties and conventions with the peoples, and the vulgar and inconsiderate foreigner—even if he is touring abroad with a party on a mission of good will—may do infinite harm to the cause that he wants to promote.