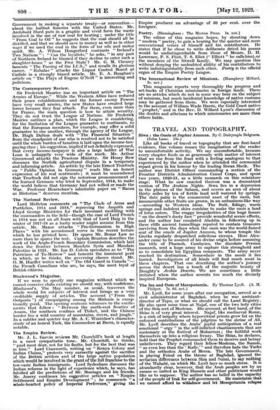 Mr. J. L. Garvin reviews Mr. Churchill's book at length in a most sympathetic tone.- Mr. - Churchill, he thinks, " paid most dear, not for his faults, but for the best that was in him." Lord Cranworth, writing on " Kenya Colony and Indian Claims," protests very earnestly against the sacrifice of the British settlers and of the large native population 'which would be involved in the grant of the full franchise to the low-caste Indian iminigrants. Lord Sydenham discusses the Indian reforms iri the light of experience which, he says, has falsified all the predictions of Mr. Montagu and his friends. Mr. Amery continues his suggestive articles on " Empire Settlement and Empire. Development " ; he commends ' a whole-hearted policy of Imperial Preference," giving the

Empire producer an advantage of 50 per cent. over the foreigner.