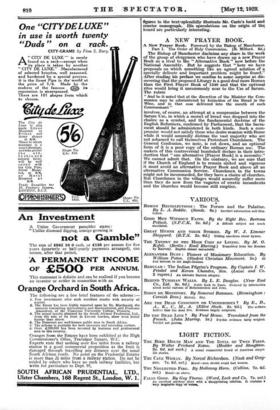 A New Prayer Book. Foreword by the Bishop of Manchester. Part I. The Order of Holy Communion. (H. Milford. 6d.)

The Bishop of Manchester disclaims any share in the -work of the group of clergymen who have drawn up a new Prayer Book as a rival to the " Alternative Book " now before the National Assembly. But he suggests that " here we have proposals on which something like an agreed solution of a specially delicate and important problem might be found." After reading his preface we confess to some surprise at dis- covering that the proposed Liturgy is a good.deal more Roman than the First Prayer Book of 1549 and that the optional rites would bring it uncommonly near to the Use of Sarum. The rubric

" And be it noted that at the discretion of the Minister the Com- munion may be administered by Intinction of the Bread in the Wine, and in that case delivered ' into the mouth of each Communicant "

involves, of course, an attempt at a compromise between the Sarum Use, in which a morsel of bread was dropped into the chalice as a symbol, and the fundamental doctrine of the English Reformers, confirmed by Parliament, that the Sacra- ment should be administered in both kinds. Such a com- promise would not satisfy those who desire reunion with Rome while it would assuredly distress the vast majority who are not ashamed to call themselves Protestant Churchmen. The General Confession, we note, is cut down, and an optional form of it is a poor copy of the ordinary Roman use. The makers of this controversial bombshell declare in their intro- duction that " one alternative [Prayer Book] is a necessity." We cannot admit that. On the contrary, we are sure that if the Church of England is to remain united and vigorous it must avoid an alternative Prayer Book and above all an alternative Communion Service. Churchmen in the towns might not be incommoded, for they have a choice of churches. But Churchmen in the villages would assuredly suffer more than they do now from the vagaries of erratic incumbents and the churches would become still emptier.