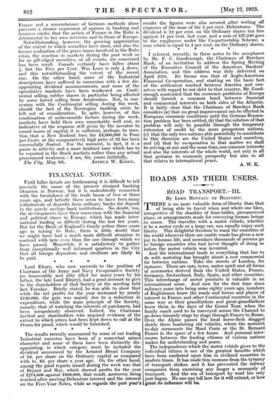 ROADS AND THEIR USERS.

ROAD TRANSPORT.—III. By LORD MONTAGU OF BEAULIEU. THERE is no more valuable form of liberty than that of being able to travel when and where one likes, irrespective of the shackles of time-tables, preconceived plans, or arrangements made for conveying human beings en masse. The traveller with a motor vehicle, whether it be a motor cycle or a large car, can equally enjoy such liberty. This delightful freedom to roam the countries of the world wherever there are usable roads has given a new joy to human life, and nowadays thousands of persons go to foreign countries who had never thought of doing so before the motor vehicle was invented.

And the international trade in everything that has to do with motoring has brought about a new commercial tie between nations. Take the streets of London, for instance. There are cars, tyres, motor spirit and all forms of accessories derived from the United States, France, Germany, Switzerland, Italy, Spain, and other countries. This interchange of motor products is valuable in an international sense. And now for the first time since railways came into being some eighty years ago, numbers of Englishmen know the roads and towns and places of interest in France and other Continental countries in the same way as their grandfathers and great-grandfathers knew them in the days of the Grand Tour, when the family coach used to be conveyed across the Channel to go down leisurely stage by stage through.France to Rome. Over the Alpine passes the local horse-flesh dragged slowly these lumbering old vehicles, where the motorist to-day surmounts the Mont Cenis or the St. Bernard Passes in the space of a few hours. And personal inter- course between the leading citizens of various nations makes for understanding and peace. The independence which the motor vehicle gives to the individual citizen is one of the greatest benefits which have been conferred upon him in civilized countries in modern times. It has made him immune from the tyranny of transport strikes, and it has prevented the railway companies from exercising any longer a monopoly of transport. And the era of transport by road has only just begun. No one can tell how far it will extend, or how great its influence will be.