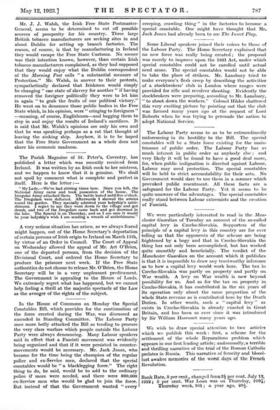 Page 3, 12 May 1923 — Some Liberal speakers joined their voices to those of the
Close

Some Liberal speakers joined their voices to those of the

Labour Party. The Home Secretary explained that no new force was really being created ; the proposal was merely to improve upon the 1831 Act, under which special constables could not be enrolled until actual need arose. The special constables would not be able to take the place of strikers. Mr. Lansbury tried to make everyone's flesh creep by describing' the activities of a stockbrokers' club in London where ranges were provided for rifle and revolver shooting. Evidently the stockbrokers were preparing, according to Mr. Lansbury, " to shoot down the workers." Colonel Hilder shattered this very exciting picture by pointing out that the club was formed many years ago at the request of Lord Roberts when he was trying to persuade the nation to adopt National Service.