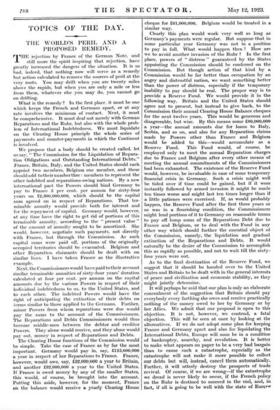 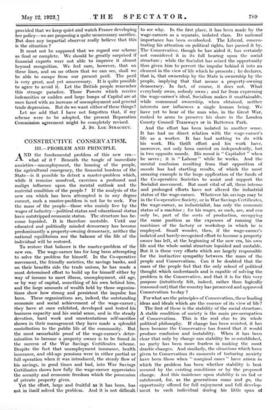 THE WORLD'S PERIL AND A PROPOSED REMEDY.

THE rejection by France of the German Note, and still more the spirit inspiring that rejection, have greatly increased the dangers of the situation. It is so bad, indeed, that nothing now will serve as a remedy but action calculated to remove the sources of peril at the very roots. You may drift when you are twenty miles above the rapids, but when you are only a mile or less from them, whatever else you may do, you cannot go on drifting.

What is the remedy ? In the first place, it must be one which keeps the French and Germans apart, or at any rate involves the minimum of contact. Next, it must be comprehensive. It must deal not merely with German Reparations and the Ruhr, but also with the whole prob- lem of International Indebtedness. We must liquidate on the Clearing House principle the whole series of payments and counter-payments in which the Continent is involved.

We propose that a body should be created called, let us say, " The Commission for the Liquidation of Repara- tion Obligations and Outstanding International Debts." France, Britain, Italy, and the United States should each appoint two members, Belgium one member, and these should add to their number thre: members to represent the other indebted and reparations-owing nations. By a new international pact the Powers should bind Germany to pay to France 5 per cent. per annum for sixty-four years on £2,500,000,000, which should be the capital sum agreed on in respect of Reparations. That ter- minable annuity would provide both for interest and for the repayment of capital. Germany would, however, at any time have the right to get rid of portions of this terminable annuity, according to the " present value " of the amount of annuity sought to be amortized. She would, however, negotiate such payments, not directly with France, but through the Commission. As such capital sums were paid off, portions of the originally occupied territories should be evacuated. Belgium and other Reparation claimants should be dealt with on similar lines. I have taken France as the illustrative example.

Next, the Commissioners would have paid to their account similar terminable annuities of sixty-four years' duration calculated at four per cent. per annum on the capital amounts due by the various Powers in respect of their individual indebtedness to us, to the United States, and to each other. The indebted Powers would have the right of anticipating the extinction of their debts on terms similar to those applied to the Germans. Further, minor Powers from whom reparations were due would pay the sums to the account of the Commissioners. The Reparations and Debts Commissioners would thus become middle-men between the debtor and creditor Powers. They alone would receive, and they alone would pay out, money in respect of Reparations and Debts.

The Clearing House functions of the Commission would be simple. Take the case of France as by far the most important. Germany would pay in, say, £125,000,000 a year in respect of her Reparations to France. France, however,. would owe, say, .L82,000,000 a year to Britain, and another £32,000,000 a year to the United States. If France is owed money by any of the smaller States, this would, of course, be brought into the account. Putting this aside, however, for the moment, France on the balance would receive a yearly Clearing House cheque for £61,000,000. Belgium would be -treated in a similar way.

Clearly this plan would work very well so long as Germany's payments were regular. But suppose that in some particular year Germany was not in a position to pay in full. What would happen then ? How are we to avoid another invasion of the Ruhr ? In the first place, powers of " distress " guaranteed by the States appointing the Commission should be conferred on the Commission. But though action of that kind by a Commission would be far better than occupation by an angry and distrustful nation, we want something better than the power of distress, especially if the temporary inability to pay should be real. The proper way is to provide a Reserve Fund. We would provide it in the following way. Britain and the United States should agree not to present, but instead to give back, to the Commission their annual Clearing House Balance cheques for the next twelve years. This would be generous and disagreeable, but wise. By this means some £80,000,000 a year—the annual amounts due for loans to Italy, Serbia, and so on, and also for any Reparation claims made by Powers other than France and Belgium would be added to this—would accumulate as a Reserve Fund. This Fund would, of course, be employed only to meet the annual Reparation charges due to France and Belgium after every other means' of meeting the annual commitments of the Commissioners had been exhausted. The existence of the Reserve Fund would, however, be invaluable in case of some temporary financial crisis in Germany. Such a crisis might well be tided over if time could be gained, but if it were instantly followed by armed invasion it might be made ten times worse and might last ten times longer than if a little patience were exercised. If, as would probably happen, the Reserve Fund after the first three years or so was in a flourishing condition, the Commissioners might lend portions of it to Germany on reasonable terms to pay off lump sums of the Reparations Debt due to France and Belgium, or to deal with the Fund in any other way which should further the essential object of the Commission, namely, the liquidation and gradual extinction of the Reparations and Debts. It would naturally be the desire of the Commission to accomplish this as rapidly as possible, and not to wait till the sixty- four years were out.

As to the final destination of the Reserve Fund, we suggest that it should be handed over to the United States and Britain to be dealt with in the general interests of peace and civilization and economic stability, as they might jointly determine.

It will perhaps be said that our plan is only an elaborate concealment of the suggestion that Britain should pay everybody every farthing she owes and receive practically nothing of the money owed to her by Germany or by her Allies. We admit that our proposal is open to this objection. It is not, however, we contend, a fatal objection. This will be seen at once by looking at the alternatives. If we do not adopt some plan for keeping France and Germany apart and also for liquidating the International Debts, Europe will soon be in a condition of bankruptcy, anarchy, and revolution. It is better to make what appears on paper to be a very bad bargain than to cause such a catastrophe, especially as the catastrophe will not make it more possible to collect our debts but will, instead, cancel them automatically. Further, it will utterly destroy the prospects of trade revival. Of course, if we are wrong—if the catastrophe we dread is never likely to occur, if the French policy on the Ruhr is destined to succeed in the end, and, in fact, if all is going to be well with the state of Euro,/ provided that we keep quiet and watch France developing her policy—we are proposing a quite unnecessary sacrifice. But does any impartial observer really believe that this is the situation ?

It must not be supposed that we regard our scheme as final or complete. We should be greatly surprised if financial experts were not able to improve it almost beyond recognition. We feel sure, however, that on these lines, and on no others that we can see, shall we be able to escape from our present peril. The peril is very great, and yet unnecessary. It is quite possible to agree to avoid it. Let the British people remember this strange paradox. Those Pow6rs which receive indemnities or sudden and large lumps of Capital are at once faced with an increase of unemployment and general trade depression. But do we want either of these things?

Let me add that I have not forgotten that, if my scheme were to be adopted, the present Reparation Commission agreement might be completely revised.