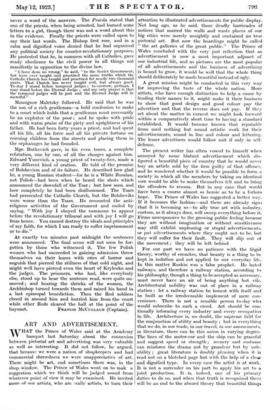 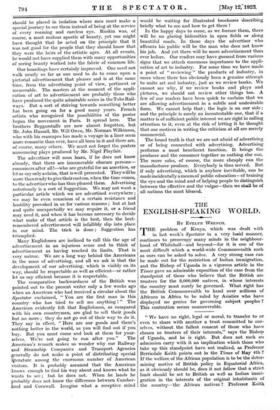 WHAT the Prince of Wales said at the Academy banquet last Saturday about the connexion between pictorial art and advertising was very valuable as well as interesting. It did not follow, he argued, that because we were a nation of shopkeepers and had 'commercial shrewdness we were unappreciative of art. -There might be art, and sometimes there was, in the shop window. The Prince of Wales went on to mak a suggestion which we think will be judged sound from whatever point of view it may be examined He invited more of our artists, who are leally artists, to turn their attention to illustrated advertisements for public display. Not long ago, as he said, those deadly barricades of notices that marred the walls and waste places of our big cities were merely unsightly and contained no true pictorial art. But now the hoardings might be called " the art galleries of the great public." The Prince of Wales concluded with the very just reflection that as advertisement is now a most important adjunct of our industrial life, and as pictures are the most popular of all advertisements and the business of advertising is bound to grow, it would be well that the whole thing should deliberately be made beautiful instead of ugly.

A great mission might be conducted in this very way for improving the taste of the whole nation. More artists, who have enough distinction to help a cause by lending their names to it, might make it their business to show that good design and good colour pay the advertiser and that the reverse does not pay. If they set about the matter in earnest we might look forward within a comparatively short time to having a standard established. It would become known that reputable firms used nothing but sound artistic work for their advertisements, sound in line and colour and lettering. The lesser advertisers would follow suit if only in self- defence.

The present writer has often vowed to himself when annoyed by some blatant advertisement which dis- figured a beautiful piece of country that he would never buy an article sold by the firm guilty of that offence, and he wondered whether it would be possible to form a society in which all the members by taking an identical vow would be able to make themselves felt and to bring the offenders to reason. But in any case that would have been a course almost so heroic as to be a forlorn hope. The Prince of Wales has suggested a better way. If it becomes the fashion—and there are already signs that it is becoming so—to ally true art with industry, custom, as it always does, will sweep everything before it. Firms unresponsive to the growing public feeling because they are without imagination or without sensitiveness may still exhibit. unpleasing or stupid advertisements, or put advertisements where they ought not to be, but they will suffer for their fault. They will slip out of the movement ; they will be left behind For our part we have no patience with the frigid theory, worthy of eremites, that beauty is a' thing to be kept in isolation and not applied to our everyday life. In this matter Ruskin was a false prophet. He hated railways, and therefore a railway station, according to his philosophy, though a thing to be accepted as necessary, must never have an air of being anything but vile. Architectural nobility was out of place in a railway station ; let a railway station be honest with itself and be built as the irredeemable implement of mere con- venience. There is not a sensible person to-day who would subscribe to such a creed. Art should be con- tinually informing every industry and every occupation in life. Architecture is, no doubt, the supreme field for the conjunction of utility and beauty ; but in everything that we do, in our trade, in our travel, in our amusements, in literature, there can be this union in varying degree. The lines of the motor-car and the ship can be graceful and suggest speed or strength ; scenery and costume can reinforce the drama not by grandeur but by suit- ability ; great literature is doubly pleasing when it is read not on a blotched page but with the help of a clear and dignified type. In every case the artist is at work. It is not a surrender on his part to apply his art to a joint production. It - is, indeed, one of his primary duties to do so, and when that truth is recognized there will be an end to the absurd theory that beautiful things should be placed in isolation where men must make a special journey to see them instead of being at the service of every roaming and careless eye. Ruskin was, of course, a most zealous apostle of beauty, yet one might have thought that he acted on the principle that it was not good for the people that they should know that they were the heirs of the artistic ages. At all events, he would not have supplied them with many opportunities of seeing beauty worked into the fabric of common life.

Our hoardings have certainly improved. One need not walk nearly so far as one used to do to come upon a pictorial advertisement that pleases and is at the same time, from the advertising point of view, pertinent or memorable. The masters at the moment of the appli- cation of art to advertisement are probably those who have produced the quite admirable series in the Tube Rail- ways. But a sort of striving towards something better has been going on for a good many years. French artists who recognized the possibilities of the poster began the movement in Paris. It spread here. The brothers Beggarstaffe are now almost forgotten, but Mr. John Hassall, Mr. Will Owen, Mr. Norman Wilkinson, who with his seascapes has made a voyage in a liner seem more romantic than ever, have all been in it and there are, of course, many others. We must not forget the posters announcing plays produced by Mr. Nigel Playfair.

The advertiser will soon learn, if he does not know already, that there are innumerable obscure persons— consumers after all!—who are grateful for an assertion, or let us say only a claim, that is well presented. They will be more than ready to give their custom, when the time comes, to the advertiser who has thus pleased them. Advertising notoriously is a sort of Suggestion. We may not want a particular article which we see advertised everywhere ; we may be even conscious of a certain resistance and hostility provoked in us for various reasons ; but at last and quite unexpectedly we may require it, or a friend may need it, and when it has become necessary to decide what make of that article is the best, then the best- remembered advertisement will infallibly slip into place in our mind. The trick is done ; Suggestion has triumphed.

Many Englishmen are inclined to call this the age of advertisement in an injurious sense and to think of advertisement as having reached its limits. That is very untrue. We are a long way behind the Americans in the mass of advertising, and all we ask is that the development of our advertising, which is visibly on its way, should be respectable as well as efficient—or rather let us say efficient because it is respectable.

The comparative backwardness of the British was pointed out to the present writer only a few weeks ago when an American who had received a circular about the Spectator exclaimed, " You are the first man in this country who has tried to sell me anything ! " The American evidently felt that Englishmen, as compared with his own countrymen, are glad to sell their goods but no more ; they do not go out of their way to do it. They say in effect, " Here are our goods and there's nothing better in the world, as you will find out if you buy. But you must come and look at them for your- selves. We're not going to run after you." The American's remark makes us wonder why our Railway and Steamship Companies and Transport Agencies generally do not make a point of distributing special literature among the enormous number of American visitors. It is probably assumed that the American knows enough to fmd his way about and knows what he wants to see ; but he does not. When he lands he probably does not know the difference between Cumber- land and Cornwall. Imagine what a receptive mind would be waiting for illustrated brochures describing briefly what to see and how to get there In the happy days to come, as we foresee them, there will be no glaring hideosities in open fields or along beautiful roads. In those days the advertiser who affronts his public will be the man who does not know his job. And yet there will be more advertisement than ever before. Our readers may have guessed from various signs that we attach enormous importance to the appli- cation of art to industry. For some time we have made a point of " reviewing " the products of industry, in cases where there has obviously been a genuine attempt to unite art and industry, just as we review books. We cannot see why, if we review books and plays and pictures, we should not review other things too. A few of our readers have been quick to exclaim that we are allowing advertisement in a subtle and undesirable form. We cannot help that ; the logic is on our side ; and the principle is surely an incontestable one, that if a matter is of sufficient public interest we are right in calling attention to it, even at the risk of letting it be thought that our motives in writing the criticism at all are merely commercial.

The broad truth is that we are not afraid of advertising or of being connected with advertising. Advertising performs a most beneficent function. It brings the producer and the consumer together as nothing else can. The more sales, of course, the more cheaply can the manufacturer produce. Everybody is thus served. But if only advertising, which is anyhow inevitable, can be made incidentally a means of public education—of training the eye and the mind and of helping people to distinguish between the effective and the vulgar—then we shall be of all nations the most blessed.