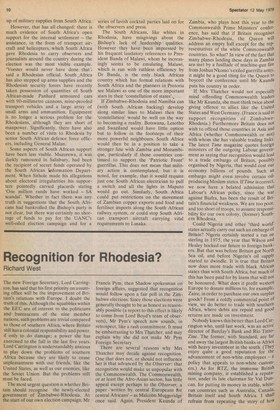 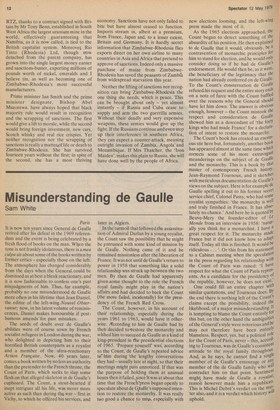 The new Foreign Secretary, Lord Carrington, has said that his first priority on assuming office will be the improvement of Britain's relations with Europe. I doubt the truth of this. Although the squabbles within the EEC are of interest to the politicians and bureaucrats of the nine member nations, such problems are trivial compared to those of southern Africa, where Britain still has a colonial responsibility and power. if only to do damage; a power she has exercised to the full in the last five years. Lord Carrington is understandably anxious to play down the problems of southern Africa because they are likely to cause unpleasantness with our friends, like the United States, as well as our enemies, like the Soviet Union. But the problems still must be faced.

The most urgent question is whether Britain should recognise the newly-elected government of Zimbabwe-Rhodesia. At the start of our own election campaign, Mr Francis Pym, then Shadow spokesman on foreign affairs, suggested that recognition would follow upon a fair poll in the Zimbabwe elections. Since those elections were generally thought to be as honest as reasonably possible (a report to this effect is likely to come from Lord Boyd's team of observers), Mr Pym's speech now sounds, in retrospect, like a rash commitment. It must be embarrassing to Mrs Thatcher, and may explain why she did not make Mr Pym Foreign Secretary.

There are several reasons why Mrs Thatcher may decide against recognition. One that does not, or should not influence her is that advanced by the Observer: that recognition would make us unpopular with the Commonwealth. The Commonwealth, or at least the Afro-Asian secton, has little appeal except perhaps to the Observer, a paper .`written by central Europeans for central Africans' — as Malcolm Muggeridge once said. Again, President Kaunda of Zambia, who plays host this year to the Commonwealth Prime Ministers' confer ence, has said that if Britain recognises Zimbabwe-Rhodesia, the Queen will address an empty hall except for the rep resentatives of the white Commonwealth countries. So what? In view of the fact that many planes landing these days in Zambia are met by a fusillade of machine-gun fire from Joshua Nkomo's exiled guerrilla army, it might be a good thing for the Queen to boycott the conference until Mr Kaunda puts his country in order.

If Mrs Thatcher would not especiallY mind offending Commonwealth leaders like Mr Kaunda, she must think twice about giving offence to allies like the United States and West Germany. (France is said to support recognition of Zimbabwe Rhodesia.) Furthermore Britain does not wish to offend those countries in Asia and Africa (whether ComMonwealth or not) with whom she has valuable trading links. The latest Time magazine quotes foreign ministers of the outgoing Labour government as saying that recognition would lead to a trade embargo of Britain, possibly organised by Nigeria, that would cost our economy billions of pounds. Such an embargo might even involve certain oilproducing Moslem states. If Time is correct, we now have a belated admission that Labour's African policy, since the war against Biafra, has been the result of Britain's financial weakness. We are too poor, and too short of troops, to assume responsibility for our own colony, (former) Southern Rhodesia.

Could Nigeria and other 'third world' states actually carry out such an embargo of Britain? Nigeria certainly started a run on sterling in 1975, the year that Wilson and Healey hocked our future to foreign bankers. But that was before Britain got North Sea oil, and before Nigeria's oil supplY started to dwindle. It is true that Britain now does more trade with black African states than with South Africa, but much of this has been paid for by loans that will not be honoured. What does it profit western Europe to donate millions to, for example, Zaire, in order to purchase our own surplus goods? From a coldly commercial point of view, we do better to trade with southern Africa, where debts are repaid and good returns are made on investment.

Nobody knows this better than Lord Carrington who, until last week, was an active director of Barclay's Bank and Rio Tinto Zinc. The former, with Standard, are far and away the largest British banks in Africa with heavy investnient in the south. (They enjoy quite a good reputation for the advancement of non-white employees — a policy that appeals to non-white customers.) As for RTZ, the immense British mining company, it established a reputation, under its late ch,airman Sir Val Duncan, for putting its money in stable, white run countries such as Australia, Canada, Britain itself and South Africa. I shall refrain from repeating the story of ho" RTZ, thanks to a contract signed with Britain by Mr Tony Benn, established in South West Africa the largest uranium mine in the world, effectively guaranteeing that Namibia, as it is now called, is tied to the British capitalist system. Moreove; Rio Tinto (Rhodesia) Ltd, though n'ow detached from the parent company, has grown into the single largest money earner and sanctions-buster, exporting millions of pounds worth of nickel, emeralds and I believe tin, as well as becoming one of Zimbabwe-Rhodesia's most successful manufacturers.

Prime minister Ian Smith and the prime minister designate, Bishop Abel Muzorewa, have always hoped that black majority rule would result in recognition and the scrapping of sanctions. The first would give a lift to morale, while the second would bring foreign investment, new cars, Scotch whisky and real rice crispies. Yet neither recognition nor the scrapping of sanctions is really a matterkof life or death to Zimbabwe-Rhodesia. She has survived fourteen years without the first; in spite of the second, she has a most thriving economy. Sanctions have not only failed to bite but have almost ceased to function. Imports stream in, albeit at a premium, from France, Japan and, to a lesser extent, Britain and Germany. It is hardly secret information that Zimbabwe-Rhodesia flies exports direct on her own airline to many countries in Asia and Africa that pretend to approve of sanctions. Indeed only a massive purchase of maize from ZimbabweRhodesia has saved the peasants of Zambra from widespread starvation this year.

Neither the lifting of sanctions nor recognition can bring Zimbabwe-Rhodesia the one thing she needs, which is peace. This can be brought about only — yet almost instantly — if Russia and Cuba cease to supply and arm the two guerrilla armies. Without their deadly and very expensive weapons, these armies would give up the fight. If the Russians continue and even step up their interference in southern Africa, they can expect a counter-attack, meaning outright invasion of Zambia, Angola' and Mozambique. If Mrs Thatcher, the 'Iron Maiden', makes this plain to Russia, she will have done well by the people of Africa.