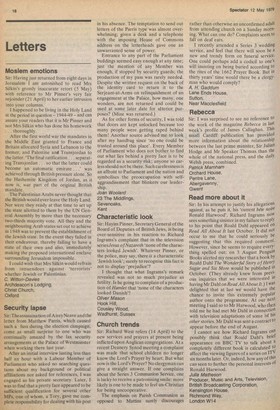 Read more about it

Sir: In his attempt to justify his allegations against, as he puts it, his `current bête noire Ronald Harwood', Richard Ingrams noW sees something sinister in my failure to replY to his point that Roald Dahl appeared on Read All About It last October. It did not occur to me that he could seriously be suggesting that this required comment. However, since he seems to require everything spelled out: on 3 August Penguin Books alerted my researcher that a book bY Roald Dahl The Wonderful Story of Henry Sugar and Six More would be published in October. (They already knew from previous inquiries that we were interested in having Mr Dahl on Read All About It.)I was delighted that at last we would have the chance to invite this extremely popular author onto the programme. At our next meeting I said so to Mr Harwood, who then told me he had met Mr Dahl in connection with television adaptations of some of his other stories. Mr Dahl was sent a contract to appear before the end of August. I cannot see how Richard Ingrams can possibly think that Roald Dahl's brief appearance on BBC TV to talk about a completely different book is calculated to affect the viewing figures of a series on ITV six months later. Or, indeed, how any of this can seen to further the personal interests of Ronald Harwood. Julia Matheson Producer, Music and Arts, Television, British Broadcasting Corporation, Kensington House, Richmond Way, London W14