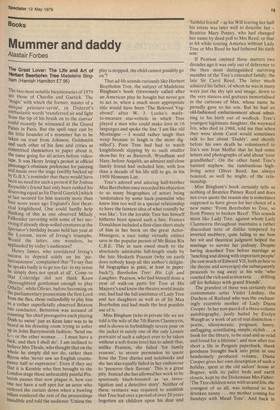 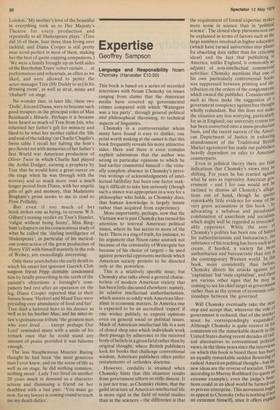 The Great Lover: The Life and Art of Herbert Beerbohm Tree Madeleine Bingham (Ham ish Hamilton £7.95) The two most notable bicentenaries of 1979 are those of Chardin and Garrick. The magic' with which the former, master of a unique peinture-verite , in Diderot's enthusiastic words 'transferred air and light from the tip of his brush on to the canvas' could recently be witnessed at the Grand Palais in Paris. But the spell once cast by the little bounder of a mummer has to be taken on trust from Johnson, Goldsmith and such other of his fans and critics as committed themselves to paper about it, the same going for all actors before videotape It It was Henry Irving's protest at official Patronage's obstinate preference for painting and music over the stage (swiftly backed up by G.B.S.'s reminder that there would have been no need for such a protest if Sir Joshua Reynolds's friend had only been ranked his deserving equal as Sir David Garrick) which at last secured for him scarcely more than four score years ago England's first theatrical knighthood. One could hardly help thinking of this as one observed Milady Falkender cavorting with some of her sur\lying if already shop-soiled creatures at the Spectator's birthday beano held last year at the Lyceum, scene of Irving's triumphs. Would the latter, one wonders, be applauded by today's audiences?

Henry James, who considered Irving's success to depend solely on his 'picturesqueness', complained that `To say that he speaks badly is to go too far: to my sense he simply does not speak at all'. Come. to that Coleridge did not think Kean 'thoroughbred gentleman enough to play Othello', while Olivier, before becoming on the parliamentary proscenium the first Lord from the flies, chose outlandishly to play him as a rather superficially observed Brixton bus conductor. Betterton was accused of counting 'his chief prerogative each playing Drab to swive' just as Kean later was to be heard in his dressing room trying to sober 1113 in John Barrymorish fashion: 'Send me L-or the other woman . . . I must have a fuck, and then I shall do'. I am inclined to believe Mrs Thrale, who thought that on the Whole he simply did not do, rather than Byron who 'never saw an English countenance half so expressive'. Even if they say that it is Kemble who first brought to the London stage those unbearably painful Pinterish pauses that now plague it, how can one not have a soft spot for an actor who Ordered the curtain down when a bawling infant rendered the rest of the proceedings Inaudible and told the audience 'Unless the play is stopped, the child cannot possibly go on'?

That ad-lib sounds curiously like Herbert Beerbohm Tree, the subject of Madeleine Bingham's book (tiresomely called after an American play he bought but never got to act in, when a much more appropriate title would have been 'The Beloved Vagabond' after W. J. Locke's madeto-measure star-vehicle in which Tree played a man who could make love in 16 languages and spoke the line 'I am like old Montaigne — I would rather laugh than weep because to laugh is the more dignified'). Poor Tree had had to watch knighthoods slipping by to such smaller show-biz fry as Bancroft. Wyndham and Hare, before Asquith, an admirer and close family friend had included him, with less than a decade of his life still to go, in his 1909 Honours List.

Tree's adored and adoring half-brother Max Beerbohm once recorded his objection to so many biographies of actors being 'undertaken by some hack-journalist who knew him too well in a special relationship to have the faintest idea of what roundly he was like'. Yet the lovable Tree has himself hitherto been spared such a fate. Frances Donaldson included a first-class short study of him in her book on the great ActorManagers, a race today virtually extinct save in the popular person of Mr Brian Rix C.B.E. This in turn owed much to the absolutely admirable full-length study by the late Hesketh Pearson (why on earth does nobody keep all this author's delightful biographies in print, at least in paperback?), Beerbohm Tree: His Life and Laughter. Pearson, who had himself done a year of walk-on parts for Tree at His Majesty's and knew the theatre world inside out, had had the full assistance of Lady Tree and her daughters as well as of Sir Max Beerbohm and had made the best possible use of it.

Miss Bingham (who in private life we are told is the wife of the 7th Baron Clanmorris, and is shown in forbiddingly severe pose on the jacket in surely one of the only Lenare portraits of such a subject ever to be taken without a soft-focus lens) has to admit that, unlike Pearson, she failed 'for family reasons', to secure permission to quote from the Tree diaries and notebooks and she has alas equally failed in her endeavour to 'preserve their flavour'. This is a great pity. Instead she has allowed her work to be spuriously blurb-boosted as 'an investigation and a detective story'. Neither of these ventures was required to establish that Tree had over a period of over 20 years begotten six children upon his dear and 'faithful friend' — as his Will leaving her half his estate was later well to describe her — Beatrice Mary Pinney, who had changed her name by deed poll to Mrs Reed, or that at 64 while touring America without Lady Tree or Mrs Reed he had fathered his sixth son: If Pearson omitted these matters two decades ago it was only out of deference to the then most distinguished surviving member of the Tree's extended family, the late Sir Carol Reed. The latter much admired his father, of whom he was in many ways just the shy spit and image, down to the very stances and gestures immortalised in the cartoons of Max, whose name he proudly gave to his son. But he had an old-fashioned embarrassment about admitting to his birth out of wedlock. Tree's youngest legitimate daughter, the wayward Iris, who died in 1968, told me that when they were alone Carol would sometimes talk to her about 'Daddy', and shortly before his own death he volunteered to Iris's son Ivan Moffat that he had some letters and photographs of and about 'your grandfather'. On the other hand Tree's bastard nephew, the rumbustious highliving actor Oliver Reed, has always boasted, as well he might, of the relationship.

Miss Bingham's book certainly tells us nothing of Beatrice Pinney Reed and does not even quote the reason she is sometimes supposed to have given for her choice of a new name: 'From Beerbohm to Tree, so from Pinney to broken Reed'. This sounds more like Lady Tree, against whom Lady Clanmorris throughout maintains a rather discordant note of dislike tempered by inverted snobbery, quite failing to see how her wit and theatrical judgment helped the marriage to survive her jealousy. Despite having described Tree before marriage as 'lunching and dining with important people' (he saw much of Edward VII, both as heir to the throne and sovereign) she subsequently proceeds to nag away at his wife 'who courted the rich and aristocratic . . . drifting off for holidays with grand friends'.

The grandest of these was certainly that consummate artist Violet Lindsay, the Duchess of Rutland who was the enchantingly eccentric mother of Lady Diana Cooper. In her non-pareil of a three-volume autobiography, justly hailed by Evelyn Waugh as 'a work of art of real distinction — poetic, idiosyncratic, poignant, funny, unflagging, scintillating, simple, stylish. . a book for the library, to be read and re-read and loved for a lifetime', and now after too short a life in Penguin paperback, thank goodness brought back into print in one handsomely produced volume. Diana Cooper gives her own description of such a holiday, spent at the old sailors' house at Bognor, with its pallet beds and earth closets, kept by the Dickensian Mrs Fisher: 'The Tree children were with us and Iris, the youngest of us all, was tethered to her drunken nanny . . . my mother coming for Sundays with Maud Tree'. And back in London: 'My mother's love of the beautiful in everything took us to Her Majesty's. Theatre for every production and repeatedly to all Shakespeare plays.' (Tree did 16 of them, four more than Irving ever tackled, and Diana Cooper is still pretty near word-perfect in most of them, making her the best of quote-capping companions.) 'We were a family brought up on both sides of the Beerbohm Trees' velvet curtain. . . at performances and rehearsals, as often as we liked, and were allowed to pester the actor-manager Tree (Mr Daddy to us) in his dressing room', as well as strut, mime and 'rhubarb' on stage.

No wonder that, in later life, these two 'Dolls', Iris and Diana, were to become such good troupers in the principal roles of Max Reinhardt's Miracle. Perhaps it is because have heard so much of Tree from Iris, who inherited her father's gift for mimicry and liked to be what her mother called the 'life and soul of the talking' (at Charlie Chaplin's Swiss table I recall her halting the host's pro-Soviet rot with memories of her father's first World war American production of Oliver Twist in which Charlie had played the Artful Dodger, earning a prophesy by Tree that he would have a great career on the stage when he was through with the movies) and so much more over a much longer period from Diana, with her angelic gifts of gab and memory, that Madeleine Bingham's prose seems to me to read so Poor Pollishly.

But even if too much of her book strikes one as being, to reverse W.S. Gilbert's teasing verdict on Tree's Hamlet, 'vulgar without being funny', Miss Bingham's chapters on his conscientious study of what he called the 'darling intelligence of Shakespeare', in particular of his meticulous construction of the great production of Henry VIII with himself masterly in the role of Wolsey, are exceedingly interesting.

Only three years before the early death to which his smart but ignorant Garrick Club surgeon friend Fripp clottishly condemned him by fatally prescribing in the teeth of the patient's objections a fortnight's compulsory bed rest after an operation on the leg, Diana Cooper reported that in their Sussex house 'Herbert and Maud Tree were presiding over abundance of food and fun'. Tree died a beloved hero to his dresser as well as to his brother Max; and his sister-inlaw's spontaneous tribute 'the greatest man who ever lived . . . except perhaps Our Lord' reminded many with a smile of his remark once that he could stand any amount of praise provided it was fulsome enough.

The less blasphemous Maurice Baring thought he had been 'the most generous man I ever knew, and on the scene of life as well as on stage, he did nothing common. nothing mean'. Lady Tree lived on another 20 years much in demand as a character actress and dismissing a friend on her deathbed with a last pun: 'You must go now, for my lawyer is coming round to teach me my death duties'.