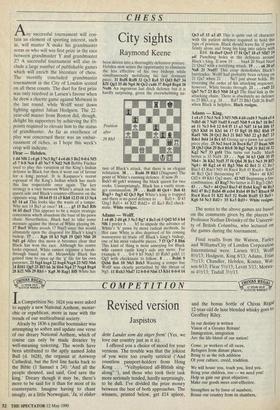 Any successful tournament will con- tain an element of sporting interest, such as, will master X make his grandmaster norm or who will win first prize in the race between grandmaster Y and grandmaster Z? A successful tournament will also in- clude a large number of publishable games which will enrich the literature of chess. The recently concluded grandmaster tournament in the City of London scored on all these counts. The duel for first prize was only resolved in Larsen's favour when he drew a chaotic game against Motwani in the last round, while Wolff went down fighting against Julian Hodgson. The 22- year-old master from Boston did, though, delight his supporters by achieving the 81/2 points required to elevate him to the status of grandmaster. As far as excellence of play was concerned there was an embar- rassment of riches, as I hope this week's crop will indicate.

The notes to the above games are based on the comments given by the players to Professor Nathan Divinsky of the Universi- ty of British Columbia, who lectured on the games during the tournament.