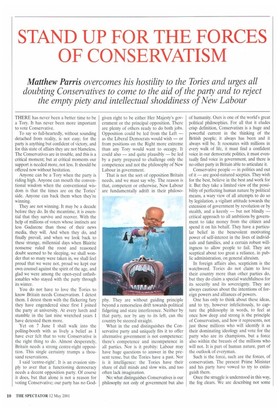 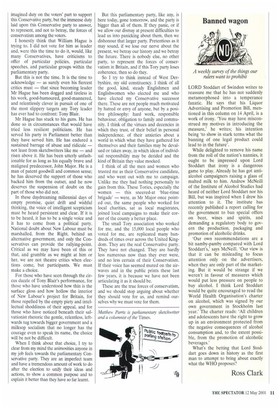 STAND UP FOR THE FORCES OF CONSERVATISM

Matthew Parris overcomes his hostility to the Tories and urges all

To say so full-heartedly, without sounding detached from reality, is not easy; for the party is anything but confident of victory, and for this state of affairs they are not blameless. The Conservatives are in trouble, and this is a critical moment; but at critical moments our support is needed more, not less. It should be offered now without hesitation.

They are not winning. It may be a decade before they do. In the meantime, it is essential that they survive and recover. With the help of millions of voters whose instincts are less Gadarene than those of their news media, they will. And when they do, and finally prevail, and when we look back to these strange, millennial days when Blairite nonsense ruled the roost and reasoned doubt seemed to be sleeping, we shall wonder that so many were taken in, we shall feel proud that we were not. proud we kept our own counsel against the spirit of the age, and glad we were among the open-eyed unfashionables who stayed with the party through its winter.

You do not have to love the Tories to know Britain needs Conservatism. I detest them. I detest them with the flickering fury they have engendered since first I joined the party at university. At every lurch and stumble in the last nine wretched years I have detested them more.

Yet on 7 June I shall walk into the polling-booth with as lively a belief as I have ever felt that to vote Conservative is the right thing to do. Almost desperately, Britain needs a strong centre-right opposition. This single certainty trumps a thousand reservations.

I said 'centre-right'. It is an evasion simply to aver that a functioning democracy needs a decent opposition party. Of course it does, but that alone is not a reason for voting Conservative; our party has no God given right to be either Her Majesty's government or the principal opposition. There are plenty of others ready to do both jobs. Opposition could be led from the Left — as the Liberal Democrats would wish — or from positions on the Right more extreme than any Tory would want to occupy. It could also — and quite plausibly — be led by a party prepared to challenge only the competence and not the philosophy of New Labour in government.

That is not the sort of opposition Britain needs, and we must say why. The reason is that, competent or otherwise, New Labour are fundamentally adrift in their philoso phy. They are without guiding principle beyond a remorseless drift towards political fidgeting and state interference. Neither by that party, nor by any to its left, can the country be steered straight.

What in the end distinguishes the Conservative party and uniquely fits it to offer alternative government is not competence: there's competence and incompetence in all parties. Nor is it probity: Labour may have huge questions to answer in the present tense, but the Tories have a past. Nor is it intelligence: the Tories have their share of dull minds and slow wits, and too often lack imagination.

No: what distinguishes Conservatives is our philosophy not only of government but also of humanity. Ours is one of the world's great political philosophies. For all that it eludes crisp definition, Conservatism is a huge and powerful current in the thinking of the British people; it always has been and it always will be. It resonates with millions in every walk of life, it must find a confident voice in our democratic politics, it must eventually find voice in government, and there is no other party in Britain able to articulate it.

Conservative people — in politics and out of it — are good-natured sceptics. They wish for the best, believe in the best and work for it. But they take a limited view of the possibility of perfecting human nature by political means, a wary view of all attempts to do so by legislation, a vigilant attitude towards the extension of government by revolution or by stealth, and a keenly — but not blindly — critical approach to all ambitions by government to take money from the citizen and spend it on his behalf. They have a particular belief in the benevolent motivating power of self-interest in the lives of individuals and families, and a certain robust willingness to allow people to fail. They are sceptical about too great a reliance, in public administration, on general altruism.

In foreign affairs also, scepticism is the watchword. Tories do not claim to love their country more than other parties do, but they do claim a special watchfulness for its security and its sovereignty. They are always cautious about the intentions of foreign powers and alliances of powers.

One has only to think about these ideas, and to try, however infelicitously, to capture the philosophy in words, to feel at once how deep and strong is the principle of Conservatism, and how it represents, not just those millions who will identify it as their dominating ideology and vote for the party who are its champions, but a force also within the breasts of the millions who will not. It is part of human nature, part of the outlook of everyman.

Such is the force, such are the forces, of conservatism. The present Prime Minister and his party have vowed to try to extinguish them.

I honestly think that William Hague is trying to. I did not vote for him as leader and, were this the time to do it, would, like many Conservatives, have criticisms to offer of particular policies, particular speeches, and particular groups within the parliamentary party.

But this is not the time. It is the time to acknowledge — as surely even his fiercest critics must — that since becoming leader Mr Hague has been dogged and tireless in his work, good-humoured, good-mannered, and relentlessly clever in pursuit of one of the most slippery targets any Tory leader has ever had to confront: Tony Blair.

Mr Hague has stuck to his guns. He has done so in circumstances that would have tried less resilient politicians. He has served his party in Parliament better than they have served him. He has endured a sustained barrage of abuse and ridicule — not least from sketchwriters like me — and risen above it. He has been utterly unfashionable for as long as his equally brave and maligned predecessor, John Major. He is a man of patent goodwill and common sense; he has deserved the support of those who backed him from the outset, and he now deserves the suspension of doubt on the part of those who did not.

In these daydreaming millennial days of empty promise, quiet drift and wishful thinking, the voice of intelligent scepticism must be heard persistent and clear. If it is to be heard, it has to be a single voice and it has to come from a political party. National doubt about New Labour must be marshalled, from the Right, behind an alternative government, and only the Conservatives can provide the rallying-point. Critical as we may have been of this or that, and grumble as we might at him or her, we are not theatre critics when elections come, but participants. We must make a choice.

For those who have seen through the circus dazzle of Tony Blair's performance, for those who have understood how thin is the surface gloss and how hollow the interior of New Labour's project for Britain, for those repelled by the empty piety and intellectual shoddiness of their appeal, and for those who have noticed beneath their salvationist rhetoric the gentle, relentless, leftwards tug towards bigger government and a milksop socialism that no longer has the courage even to speak its name, the choice will be not be difficult.

When I think about that choice, I try to clear from my mind the animosities anyone in my job feels towards the parliamentary Conservative party. They are an imperfect team and have a tremendous amount of work to do after the election to unify their ideas and actions, to show a common purpose and to explain it better than they have so far learnt. But this parliamentary party, like any, is here today, gone tomorrow, and the party is bigger than all of them. If they panic, or if we allow our dismay at present difficulties to lead us into panicking about them, then we dishonour that larger party. Pretentious as it may sound, if we lose our nerve about the present, we betray our history and we betray the future. There is nobody else, no other party, to represent the forces of conservatism in Britain, and if this Tory party loses coherence, then so do they.

So I try to think instead of West Derbyshire, my old constituency. I think of all the good, kind, steady Englishmen and Englishwomen who elected me and who have elected my Conservative successor there. These are not people much motivated by hatred or envy of anyone, but by a positive philosophy: hard work, responsible behaviour, obligation to family and community. I think of the virtues and decencies in which they trust, of their belief in personal independence, of their anxieties about a world in which what they have gathered for themselves and their families may be devalued or taken away, in which ideas of individual responsibility may be derided and the kind of Britain they value mocked.

I think of all the men and women who trusted me as their Conservative candidate, and who went out with me to campaign. Unlike me they had nothing personally to gain from this. These Tories, especially the women — this sneered-at 'blue-rinse brigade' — were, as Mr Major once pointed out, the same people who worked for local charities, sat as local magistrates, joined local campaigns to make their corner of the county a better place.

The small Tory association who worked for me, and the 15,000 local people who voted for me, are replicated many hundreds of times over across the United Kingdom. They are the real Conservative party. They have not changed. They are hardly less numerous now than they ever were, and no less certain of their Conservatism. If their voice has seemed muted on the airwaves and in the public prints these last few years, it is because we have not been articulating it as it should be.

These are the true forces of conservatism, and we should stop arguing about whether they should vote for us, and remind ourselves why we must vote for them.