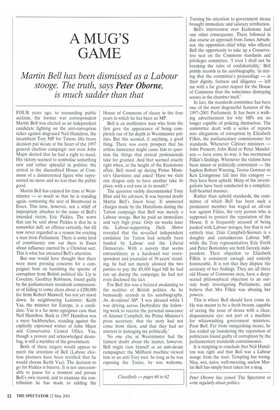 Martin Bell has been dismissed as a Labour

is much sadder than that

FOUR years ago, to resounding public acclaim, the former war correspondent Martin Bell was elected as an independent candidate fighting on the anti-corruption ticket against disgraced Neil Hamilton, the incumbent Tory MP for Tatton. His brave decision put sleaze at the heart of the 1997 general election campaign: not even John Major denied that he had a right to stand. His victory seemed to symbolise something new and rather splendid in politics: the arrival in the discredited House of Commons of a disinterested figure who represented no more and no less than the public good.

Martin Bell has enjoyed his time at Westminster — so much so that he is standing again, contesting the seat of Brentwood in Essex. This time, however, not a whiff of impropriety attaches to the name of Bell's intended victim, Eric Pickles. The worst that can be said about Pickles is that he is somewhat dull; an offence certainly, but till now never regarded as a reason for evicting a man from Parliament. There is some kind of constituency row out there in Essex about influence exerted by a Christian sect. This is what has attracted Bell's attention.

But one would have thought that there were more pressing concerns for a campaigner bent on banishing the spectre of corruption from British political life. Up in Coventry, Geoffrey Robinson, found guilty by the parliamentary standards commissioner of failing to come clean about a £200,000 fee from Robert Maxwell, has not yet stood down. In neighbouring Leicester, Keith Vaz, the minister for Europe, is a candidate. Vaz is a far more egregious case than Neil Hamilton. Back in 1997 Hamilton was a mere backbencher, standing against the explicitly expressed wishes of John Major and Conservative Central Office. Vaz, though a proven and acknowledged sleazebag, is still a member of the government.

Both of these targets would appear to merit the attention of Bell (Labour election planners have been terrified that he would choose Keith Vaz). The decision to go for Pickles is bizarre. It is not unreasonable to pause for a moment and peruse Bell's own record, and to examine the contribution he has made to ridding the House of Commons of sleaze in the four years in which he has been an MP.

Bell is an inoffensive man who from the first gave the appearance of being completely out of his depth in Westminster politics. But this seemed, if anything, a good thing. There was every prospect that his artless innocence might cause him to question the things that cynical professionals take for granted. And that seemed exactly right when, at the height of the Ecclestone affair, Bell stood up during Prime Minister's Questions and asked 'Have we slain one dragon only to have another take its place, with a red rose in its mouth?'

The question visibly discommoded Tony Blair and his advisers. It was beyond doubt Martin Bell's finest hour. It answered charges made by the Hamiltons during the Tatton campaign that Bell was merely a Labour stooge. But he paid an immediate and very high price. Only six weeks later the Labour-supporting Daily Mirror revealed that the so-called independent candidate for Tatton had actually been funded by Labour and the Liberal Democrats. With a naivety that seems extraordinary in a hardened war correspondent and journalist of 30 years' standing, he had not merely allowed the two parties to pay the £9,400 legal bill he had run up during the campaign; he had not even disclosed the fact.

For Bell this was a belated awakening to the realities of British politics. As he bemusedly records in his autobiography, An Accidental MP, 'I was pleased while I was driving across Derbyshire the following week to receive the personal assurance of Alastair Campbell, the Prime Minister's press secretary, that the story had not come from them, and that they had no interest in damaging me politically.'

No one else at Westminster had the faintest doubt about the matter, however. Bell might view himself as an anti-sleaze campaigner; the Millbank machine viewed him as an anti-Tory tool. So long as he was exposing the Tories, he was welcome. Turning his attention to government sleaze brought immediate and salutary retribution.

Bell's intervention over Eeclestone had one other consequence. There followed in due course an approach from James Arbuthnot, the opposition chief whip, who offered Bell the opportunity to take up a Conservative seat on the Commons standards and privileges committee. 'I trust I shall not be breaking the rules of confidentiality,' Bell primly records in his autobiography, 'in stating that the committee's proceedings — in their dignity, fairness and diligence — left me with a far greater respect for the House of Commons than the sometimes dismaying scenes in the chamber itself.'

In fact, the standards committee has been one of the most disgraceful features of the 1997-2001 Parliament. It has been a walking advertisement for why MPs are no longer capable of policing themselves. The committee dealt with a series of reports into allegations of corruption by Elizabeth Filkin, the parliamentary commissioner for standards. Whenever Cabinet ministers — John Prescott, John Reid or Peter Mandelson — have come its way, it has overturned Filkin's findings. Whenever the victims have been minor or politically convenient — the hapless Robert Wareing, Teresa Gorman or Ken Livingstone fall into this category — they have been upheld. Many of the investigations have been conducted in a complicit, half-hearted manner.

Rather than uphold standards, the committee of which Bell has been such a prominent member has waged an all-out war against Filkin, the very person who is supposed to protect the reputation of the House. It is frequently accused of being packed with Labour stooges, but that is not entirely true. Dale Campbell-Savours is a doughty and cantankerous Labour MP, while the Tory representatives Eric Forth and Peter Bottomley are both fiercely independent. Their objection to Elizabeth Eakin is consistent enough and entirely honourable. It is not that they dispute the accuracy of her findings. They are all three old House of Commons men, have a deepseated philosophical objection to an outside body investigating Parliament, and believe that Mrs Filkin was abusing her powers.

This is where Bell should have come in. He was meant to be a fresh broom, capable of seeing the issue of sleaze with a clear, dispassionate eye: not part of a machine for whitewashing government ministers. Poor Bell. Far from vanquishing sleaze, he has ended up laundering the reputation of politicians found guilty of corruption by the parliamentary standards commissioner.

It is tempting to conclude that Neil Hamilton was right and that Bell was a Labour stooge from the start. Tempting but wrong. Nice, wet, naive, well-meaning, useless Martin Bell has simply been taken for a mug.