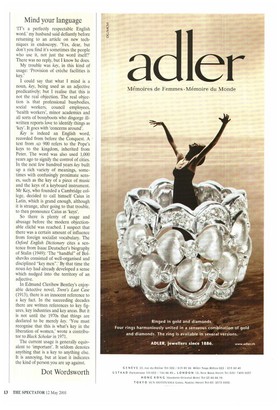 'IT's a perfectly respectable English word,' my husband said defiantly before returning to an article on new techniques in endoscopy. 'Yes, dear, but don't you find it's sometimes the people who use it, not just the word itself?' There was no reply, but I know he does.

My trouble was key, in this kind of usage: 'Provision of crèche facilities is key.'

I could say that what I mind is a noun, key, being used as an adjective predicatively; but I realise that this is not the real objection. The real objection is that professional busybodies, social workers, council employees, 'health workers', minor academics and all sorts of bossyboots who disgorge illwritten reports love to identify things as 'key'. It goes with 'concerns around'.

Key is indeed an English word, recorded from before the Conquest. A • text from Al) 900 refers to the Pope's keys to the kingdom, inherited from Peter. The word was also used 1,000 years ago to signify the control of cities. In the next few hundred years key built up a rich variety of meanings, sometimes with confusingly proximate senses, such as the key of a piece of music and the keys of a keyboard instrument. Mr Key, who founded a Cambridge college, decided to call himself Caius in Latin, which is grand enough, although it is strange, after going to that trouble, to then pronounce Caius as 'keys'.

So there is plenty of usage and abusage before the modern objectionable cliché was reached. I suspect that there was a certain amount of influence from foreign socialist vocabulary. The Oxford English Dictionary cites a sentence from Isaac Deutscher's biography of Stalin (1949): The "handful" of Bolsheviks consisted of well-organised and disciplined "key men".' By that time the noun key had already developed a sense which nudged into the territory of an adjective.

In Edmund Clerihew Bentley's enjoyable detective novel, Trent's Last Case (1913), there is an innocent reference to a key fact. In the succeeding decades there are written references to key figures, key industries and key areas. But it is not until the 1970s that things are declared to be merely key. 'You must recognise that this is what's key in the liberation of women,' wrote a contributor to Black Scholar in 1971.

The current usage is generally equivalent to 'important'. It seldom denotes anything that is a key to anything else. It is annoying, but at least it indicates the kind of person you are up against.