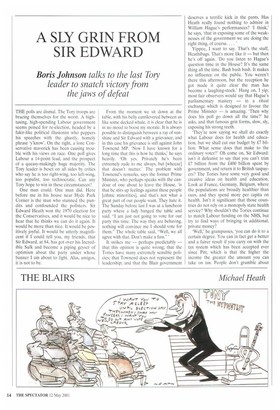 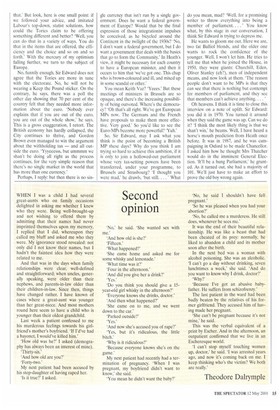 A SLY GRIN FROM SIR EDWARD

THE polls are dismal. The Tory troops are bracing themselves for the worst. A hightaxing, high-spending Labour government seems poised for re-election, headed by a fakir-like political illusionist who peppers his speeches with the ghastly, homely phrase 'y'know'. On the right, a lone Conservative maverick has been causing trouble with his views on race. One poll gives Labour a 14-point lead, and the prospect of a queasy-makingly huge majority. The Tory leader is beset on all sides by critics who say he is too right-wing, too left-wing, too populist, too technocratic. Can any Tory hope to win in these circumstances?

One man could. One man did. Here before me in his house near Hyde Park Corner is the man who stunned the pundits and confounded the pollsters. Sir Edward Heath won the 1970 election for the Conservatives, and it would be nice to hear that he thinks we can do it again. It would be more than nice. It would be positively joyful. It would be utterly magnificent if I could tell you, my friends, that Sir Edward, at 84, has got over his Incredible Sulk and become a piping geyser of optimism about the party under whose banner I am about to fight. Alas, amigos, it is not to be.

From the moment we sit down at the table, with his belly cantilevered between us like some decked whale, it is clear that he is in no mood to boost my morale. It is always possible to distinguish between a ray of sunshine and Sir Edward with a grievance; and in this case his grievance is still against John Townend MP. 'Now I have known for a long time that this is how he thinks,' he says heavily. 'Oh yes. Privately he's been extremely rude to me always, but [wheeze] that doesn't matter, The problem with Townend's remarks, says the former Prime Minister, who perhaps speaks with the candour of one about to leave the House, 'is that he stirs up feelings against these people [ethnic minorities], and that's not what a great part of our people want, They hate it. The Sunday before last I was at a luncheon party where a lady banged the table and said. "I am just not going to vote for our party this time. The way they are behaving, nothing will convince me I should vote for them." The whole table said, "Well, we all agree with that. Don't make a fuss."' It strikes me — perhaps predictably — that this opinion is quite wrong; that the Tories have many extremely sensible policies; that Townend does not represent the leadership; and that the Blair government deserves a terrific kick in the pants. Has Heath really found nothing to admire in William Hague's performances? 'I think,' he says, 'that in exposing some of the weaknesses of the government we are doing the right thing, of course..

Yippee, I want to say. That's the stuff, Heathibags. That's more like it — but then he's off again. 'Do you listen to Hague's question time in the House? It's the same thing all the time. Bash bash bash. It makes no influence on the public. You weren't there this afternoon, but the reception he got made it quite clear the man has become a laughing-stock,' Hang on, I yip; most fair observers would say that Hague's parliamentary mastery — in a ritual exchange which is designed to favour the Prime Minister — is amazing. 'Then why does his poll go down all the time?' he asks, and that famous grin forms, slow, sly, exposing his strong teeth.

'They're now saying we shall do exactly what Labour does for health and education, but we shall cut our budget by £7 billion. What sense does that make to the ordinary voter?' Oh come on, Sir Edward: isn't it defeatist to say that you can't trim £7 billion from the £400 billion spent by government, and return it to British taxpayers? The Tories have some very good and creative ideas on health and education. Look at France, Germany, Belgium, where the populations are broadly healthier than ours, and they spend more per capita on health. Isn't it significant that those countries do not rely on a monopoly state health service? Why shouldn't the Tories continue to match Labour funding on the NHS, but try to find ways of bringing in additional, private money?

'Well,' he grampusses, 'you can do it to a certain degree. You can in fact get a better and a fairer result if you carry on with the tax system which has been accepted ever since Pitt, which is that the higher the income the greater the amount you can take on tax. People don't grumble about that.' But look, here is one small point: if we followed your advice, and imitated Labour's top-down, statist solutions, how could the Tories claim to be offering something different and better? 'Well, you can do that in a variety of ways. You do that in the items that are offered, the efficiency and the choice and so on and so forth.' With the mercury of my optimism falling further, we turn to the subject of Europe.

No, funnily enough, Sir Edward does not agree that the Tories are more in tune with the electorate. No, he will not be wearing a Keep the Pound sticker. On the contrary, he says, there was a poll the other day showing that 70 per cent of the country felt that they needed more information about the euro. 'Nobody ever explains that if you are out of the euro, you are out of the whole show,' he says. This is a gross exaggeration, I retort. The British economy has hardly collapsed, the City continues to thrive, and Gordon Brown even managed to win the argument about the withholding tax — and all outside the euro. 'Yyyeeesss, but ummmm we shan't be doing all right as the process continues, for the very simple reason that there's no single market in the world that has more than one currency.'

Perhaps, I reply: but then there is no sin

gle currency that isn't run by a single government. Does he want a federal government of Europe? Would that be the final expression of those integrationist impulses he conceived, as he bicycled around the Continent in the twilight of the 1930s? 'No, I don't want a federal government, but I do want a government that deals with the basics that go to form the Community.' In Heath's view, it might be necessary for each country to have a European minister, and then it occurs to him that 'we've got one. This chap who is brown-coloured and ill, and mixed up in some scandal or other.'

You mean Keith Vaz? 'Yeees." But these meetings of ministers in Brussels are so opaque, and there's the increasing possibility of being outvoted. Where's the democracy? 'Oh that's all right. We've got European MPs now. The Germans and the French have proposals to make them more effective. Very good.So you'd like to see the Euro-MPs become more powerful? `Yuh.'

So, Sir Edward, may I ask what you think is the point of becoming a British MP these days? Why do you think I am trying so hard to achieve this ambition, if it is only to join a hollowed-out parliament whose very tax-setting powers have been transferred, under your programme, to Brussels and Strasbourg? `I thought you were mad,' he drawls, 'but still... . ' What do you mean, mad? 'Well, for a promising writer to throw everything into being a member of parliament....' You know what, by this stage in our conversation, I think Sir Edward is trying to depress me.

He wants to gloom me out. Here we are, two fat Balliol blonds, and the older one wants to rock the confidence of the younger. Well. I won't let him. He tries to tell me that when he joined the House, in 1950. they were giants: Churchill, Eden, Oliver Stanley (eh?), men of independent means, and now look at them. 'The reason people don't want to be MPs is that they can see that there is nothing but contempt for members of parliament, and they see that members can't achieve anything... .

Oh heavens. I think it is time to close this interview on a note of uplift. Sir Edward: you did it in 1970. You turned it around when they said the game was up. Can we do it? 'I think the most likely thing is that we shan't win,' he beams. Well, I have heard a horse's mouth prediction from Heath once before. It was in 1987, and he was campaigning in Oxford to be made Chancellor. I asked him how he thought Mrs Thatcher would do in the imminent General Elec

tion. be a hung Parliament,' he grunted. As it turned out, she had a majority of 101. We'll just have to make an effort to prove the old boy wrong again.