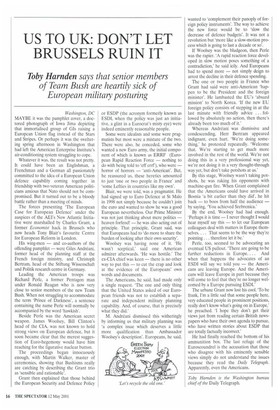 US TO UK: DON'T LET BRUSSELS RUIN IT

of Team Bush are heartily sick of European military posturing

Washington, DC MAYBE it was the pamphlet cover, a doctored photograph of Iowa Jima depicting that immortalised group of GIs raising a European Union flag instead of the Stars and Stripes. Or perhaps it was the sweltering spring afternoon in Washington that had left the American Enterprise Institute's air-conditioning system struggling to cope.

Whatever it was, the result was not pretty. It could have been an Englishman, a Frenchman and a German all passionately committed to the idea of a European Union defence capability coming together in friendship with two veteran American politicians anxious that Nato should not be compromised. But it turned out to be a bloody battle rather than a meeting of minds.

The forces presenting 'The European Case for European Defence' under the auspices of the AEI's New Atlantic Initiative were marshalled by Charles Grant, a former Economist hack in Brussels who now heads Tony Blair's favourite Centre for European Reform in London.

His wing-men — and co-authors of the offending pamphlet — were Giles Andreani, former head of the planning staff at the French foreign ministry, and Christoph Bertram, head of the Stiftung Wissenschaft und Politik research centre in Germany.

Leading the American troops was Richard Perle, a former Pentagon man under Ronald Reagan who is now very close to senior members of the new Team Bush. When not struggling to accommodate the term 'Prince of Darkness', a sentence containing the name Perle will normally be accompanied by the word 'hawkish'.

Beside Perle was the American secret weapon. James Woolsey, Bill Clinton's head of the CIA, was not known to hold strong views on European defence, but it soon became clear that the merest suggestion of Euro-hegemony would have him reaching for the figurative nuclear button.

The proceedings began innocuously enough, with Martin Walker, master of ceremonies, showing that Bushisms really are catching by describing the Grant trio as 'sensible and rationable'.

or ESDP (the acronym formerly known as ESDI, when the policy was just an initiative, a glint in a Eurocrat's misty eye) were indeed eminently reasonable people.

Some were idealists and some were pragmatists but most were a mixture of the two. There were also, he conceded, some who wanted a new Euro army, the initial component of which is known as ERRF (European Rapid Reaction Force — nothing to do with being told to `eff ertf), who were — horror of horrors — 'anti-American'. But, he reassured us. these heretics amounted to just 'one or two people in France' and 'some Lefties in countries like my own'.

Blair, we were told, was a pragmatist. He had signed up to Euro Defence at St Maio in 1998 not simply because he couldn't join the euro and wanted to show he was a good European nevertheless. Our Prime Minister was not just thinking about mere politics — heaven forfend! — he was also acting out of principle. That principle, Grant said, was that Europeans had to 'do more to share the burden of looking after their own security'.

Woolsey was having none of it. 'He wasn't sceptical,' said one American admirer afterwards. 'He was hostile.' The ex-CIA chief was keen — there is no other way to put this — to cut the crap and look at the evidence of the Europeans' own words and documents.

The Americans, he said, had made only a single request. 'The one and only thing that the United States asked of our European friends was not to establish a separate and independent military planning capability. And, of course, that is precisely what they did.'

M. Andreani dismissed this witheringly by informing us that military planning was 'a complex issue which deserves a little more qualification than Ambassador Woolsey's description'. Europeans, he said.

wanted to 'complement their panoply of foreign policy instruments'. The way to achieve the new force would be to 'slow the decrease of defence budgets'. It was not a revolution but 'more like a slow-motion process which is going to last a decade or so'.

If Woolsey was the bludgeon, then Perle was the rapier. 'A rapid reaction force developed in slow motion poses something of a contradiction,' he said icily. And Europeans had to spend more — not simply deign to arrest the decline in their defence spending.

The one or two people in France who Grant had said were anti-American 'happen to be the President and the foreign minister'. He lambasted the EU's 'absurd mission' to North Korea. 'If the new EU foreign policy consists of stepping in at the last minute with friendly advice . . . followed by absolutely no action, then there's already been too much of it.'

Whereas Andreani was dismissive and condescending, Herr Bertram appeared indignant, even hurt. 'We're doing something,' he protested repeatedly. 'Welcome that. We're starting to get much more involved in the rest of the world. We're not doing this in a very professional way yet, we're not doing it in a very thought-through way yet, but don't take potshots at us.'

By this stage, Woolsey wasn't taking potshots, he was raking his opponents with machine-gun fire. When Grant complained that the Americans could have arrived in Bosnia 'a bit earlier than they did', he hit back — to boos from half the audience — by saying, 'You achieved Srebrenica.'

By the end, Woolsey had had enough. 'Perhaps it is time — I never thought I would hear myself say this — to let our European colleagues deal with matters in Europe themselves. . . That seems to be the way they're pointing . . therefore let it be.'

Perle, too, seemed to be advocating an eventual US pullout. 'There are going to be further reductions in Europe. . . And when that happens the advocates of an ESDI will say we told you — the Americans are leaving Europe. And the Americans will leave Europe in part because they will come to feel that they're no longer welcomed by a Europe pursuing ESDI.'

The urbane Grant now lost his cool. 'To be frank, I'm a little sad that some people here, very educated people in prominent positions, really don't know what's going on in Europe,' he preached. 'I hope they don't get their views just from reading certain British newspapers who have their own agenda to pursue, who have written stories about ESDP that are totally factually incorrect.'

He had finally reached the bottom of his ammunition box. The last refuge of the Euroscoundrel is the accusation that those who disagree with his eminently sensible views simply do not understand the issues because they read the Daily Telegraph. Apparently, even the Americans.