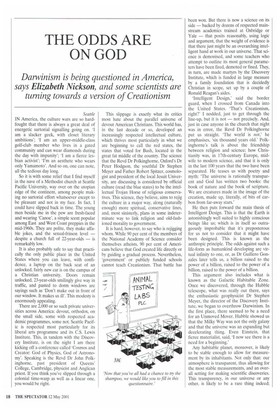 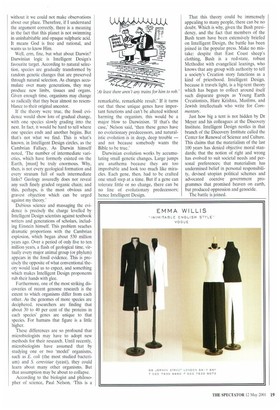 THE ODDS ARE ON GOD

Darwinism is being questioned in America,

says Elizabeth Nickson, and some scientists are

turning towards a version of Creationism

Seattle IN America, the culture wars are so hardfought that there is always a great deal of energetic sartorial signalling going on. 'I am a slacker geek, with closet literary ambitions'; 'I am an upper-middle-class golf-club member who lives in a gated community and can wear diamonds during the day with impunity'; 'I am a fierce lesbian activist'; 'I'm an aesthete who wears only Yamamoto'. And so on, one can note, all the tedious day long.

So it is with some relief that I find myself in the nave of a Methodist church at Seattle Pacific University, way over on the utopian edge of the continent, among people making no sartorial effort whatsoever except to be pleasant and not in my face. In fact, I could have slipped back in time. The young men beside me in the pew are fresh-faced and wearing 'Canoe', a simple scent popular among East and West Coast preppies in the mid-1960s. They are polite, they make affable jokes, and the sexual-frisson level — despite a church full of 22-year-olds — is remarkably low.

It is also probably safe to say that practically the only public place in the United States where you can leave, with confidence, a laptop on the back seat of an unlocked, fairly new car is on the campus of a Christian university. Doors remain unlocked, 23-year-olds smilingly give way in traffic, and pasted to dorm windows are sayings such as 'Don't make out in front of our window. It makes us ill'. This modesty is enormously appealing.

There are 2,000 or so such private universities across America: devout, orthodox, on the small side, some with respected academic programmes, some not. Seattle Pacific is respected most particularly for its liberal arts programme and its C.S. Lewis Institute. This, in tandem with the Discovery Institute, is on the night I am there kicking off a conference called 'Cosmos and Creator: God of Physics, God of Astronomy'. Speaking is the Revd Dr John Polkinghorne, past president of Queens' College, Cambridge, physicist and Anglican priest. If you think you've slipped through a colonial time-warp as well as a linear one, you would be right. This slippage is exactly what its critics most hate about the parallel universe of devout American Christians. This world has, in the last decade or so, developed an increasingly respected intellectual culture, which thrives most particularly in what we are beginning to call the red states, the states that voted for Bush, located in the great fat middle of the country. The science that the Revd Dr Polkinghome, Oxford's Dr Peter Hodgson. the youthful Dr Stephen Meyer and Father Robert Spitzer, cosmologist and president of the local Jesuit University, are discussing is considered by official culture (read the blue states) to be the intellectual Trojan Horse of religious conservatives. This science, they believe, aims to rejig the culture in a major way, along (naturally enough) more spiritual, conservative lines, and, most sinisterly, plans in some indeterminate way to link religion and old-fashioned morality to government.

It is hard, however, to say who is rejigging whom. "While 90 per cent of the members of the National Academy of Science consider themselves atheists, 90 per cent of Americans believe that God created life directly or by guiding a gradual process. Nevertheless, 'government' or publicly funded schools cannot teach Creationism. That battle has been won. But there is now a science on its side — backed by dozens of respected mainstream academics trained at Oxbridge or Yale — that posits reasonably, using logic and argument, that the weight of evidence is that there just might be an overarching intelligent hand at work in our universe. That science is demonised, and some teachers who attempt to outline its most general parameters have been fired, demoted or fined. They, in turn, are made martyrs by the Discovery Institute, which is funded in large measure by a family foundation that is decidedly Christian in scope, set up by a couple of Ronald Reagan's aides.

'Intelligent Design,' said the border guard, when I crossed from Canada into the United States. 'That's Creationism, right?' I nodded, just to get through the line-up, but it is not — not precisely. And, just in case anyone in the church that night was in error, the Revd Dr Polkinghorne put us straight. 'The world is not,' he emphasises, 'six thousand years old.' Polkinghorne's talk is about the friendship between religion and science; how Christianity was, in 17th-century Europe, midwife to modern science, and that it is only in the last 100 years that the two have been separated. He teases us with poetry and myth: 'The universe is rationally transparent and God has written two books: the book of nature and the book of scripture. We are creatures made in the image of the creation, made up, literally, of bits of carbon from far-away stars.'

This argument also includes what is known as the Galactic Habitable Zone. Once we discovered, through the Hubble telescope, what was really out there, says the enthusiastic geophysicist Dr Stephen Meyer, the director of the Discovery Institute, we began to overthrow Darwinism. In the first place, there seemed to be a need for an Unmoved Mover. Hubble showed us that the Milky Way was not the only galaxy and that the universe was an expanding but decelerating thing. Even Einstein, that fierce materialist, said, 'I now see there is a need for a beginning.'

Any habitable planet, moreover, is likely to be stable enough to allow for measurement by its inhabitants. Not only that: our atmosphere is transparent, thus allowing for the most stable measurements, and an overall setting for making scientific discoveries. This transparency, in our universe or any other, is likely to be a rare thing indeed; without it we could not make observations about our place. Therefore, if I understand the argument correctly, there is a meaning in the fact that this planet is not swimming in uninhabitable and opaque sulphuric acid. It means God is free and rational, and wants us to know Him.

Well, erm, fine, but what about Darwin? Darwinian logic is Intelligent Design's favourite target. According to natural selection, species are gradually transformed by random genetic changes that are preserved through natural selection. As changes accumulate over many generations, they may produce new limbs, tissues and organs. Given enough time, organisms may change so radically that they bear almost no resemblance to their original ancestor.

If the theory were true, the fossil evidence would show lots of gradual change, with one species slowly grading into the next. In fact, it would be hard to tell where one species ends and another begins. But that's not what we find. This is what's known, in Intelligent Design circles, as the Cambrian Fallacy. As Darwin himself noted, The number of intermediate varieties, which have formerly existed on the Earth, [must] be truly enormous. Why, then, is not every geological formation and every stratum full of such intermediate links? Geology assuredly does not reveal any such finely graded organic chain; and this, perhaps, is the most obvious and gravest objection which can be urged against my theory.'

Dubious science and massaging the evidence is precisely the charge levelled by Intelligent Design scientists against textbook writers and generations of scholars, including Einstein himself. This problem reaches dramatic proportions with the Cambrian explosion, which began about 530 million years ago. Over a period of only five to ten million years, a flash of geological time, virtually every major animal group (or phylum) appears in the fossil evidence. This is precisely the opposite of what conventional theory would lead us to expect, and something which makes Intelligent Design proponents rub their hands with glee.

Furthermore, one of the most striking discoveries of recent genome research is the extent to which organisms differ from each other. As the genomes of more species are deciphered, researchers are finding that about 30 to 40 per cent of the proteins in each species' genes are unique to that species. For humans that figure is a little higher.

These differences are so profound that microbiologists may have to adopt new methods for their research. Until recently, microbiologists have assumed that by studying one or two 'model' organisms, such as E. coli (the most studied bacterium) and S. eerevisiae (yeast), they could learn about many other organisms. But that assumption may be about to collapse.

According to the biologist and philosopher of science, Paul Nelson, 'This is a remarkable, remarkable result.' If it turns out that these unique genes have important functions and can't be altered without harming the organism, this would be a major blow to Darwinism. 'If that's the case,' Nelson said, 'then these genes have no evolutionary predecessors, and naturalistic evolution is in deep, deep trouble — and not because somebody wants the Bible to be true.'

Darwinian evolution works by accumulating small genetic changes. Large jumps are anathema because they are too improbable and look too much like miracles. Each gene, then, had to be crafted one small step at a time. But if a gene can tolerate little or no change, there can be no line of evolutionary predecessors; hence Intelligent Design.

That this theory could be immensely appealing to many people, there can be no doubt. Which is why, given the Bush presidency, and the fact that members of the Bush team have been extensively briefed on Intelligent Design, the battle has been joined in the popular press. Make no mistake: despite that East Coast sheep's clothing, Bush is a red-state, robust Methodist with evangelical leanings, who knows that any group with authority to tell a society's Creation story functions as a kind of priesthood. Intelligent Design, because it travels light, is a big-tent theory which has begun to collect around itself such disparate groups as Young Earth Creationists, Hare Krishna, Muslims, and Jewish intellectuals who write for Commentary.

Just how big a tent is not hidden by Dr Meyer and his colleagues at the Discovery Institute. Intelligent Design nestles in that branch of the Discovery Institute called the Center for Renewal of Science and Culture. This claims that the materialism of the last 100 years has denied objective moral standards; that the notion of right and wrong has evolved to suit societal needs and personal preferences; that materialism has undermined belief in personal responsibility, devised utopian political schemes and advocated coercive government programmes that promised heaven on earth, but produced oppression and genocide.

The battle is joined.