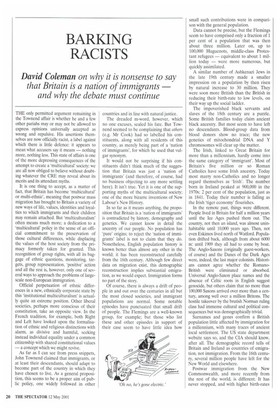 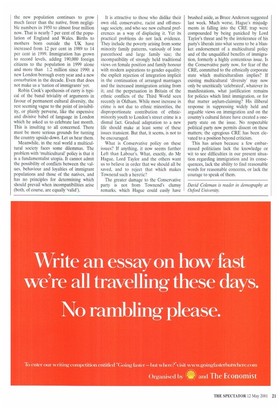 David Coleman on why it is nonsense to say

THE only permitted argument remaining in the Townend affair is whether he and a few other pariahs may or may not be allowed to express opinions universally accepted as wrong and repulsive. His assertions themselves are now officially racist, a label against which there is little defence: it appears to mean what accusers say it means — nothing more, nothing less. This state of affairs is one of the more depressing consequences of the attempt to create a 'multicultural' society: we are all now obliged to believe without doubting whatever the CRE may reveal about its merits and its attendant myths.

It is one thing to accept, as a matter of fact, that Britain has become 'multicultural' or multi-ethnic', meaning that postwar mass migration has brought to Britain a variety of new ways of life, values, identities and loyalties to which immigrants and their children may remain attached. But 'multiculturalism' often means much more; a dedication to a 'multicultural' policy in the sense of an official commitment to the preservation of those cultural differences, while displacing the values of the host society from the primacy formerly taken for granted. This recognition of group rights, with all its baggage of ethnic questions, monitoring, targets, group representation, 'positive' action and all the rest is, however, only one of several ways to approach the problems of largescale non-European immigration.

Official perpetuation of ethnic differences in a new, ethnically corporate state by this 'institutional multiculturalism' is actually quite an extreme position. Other liberal societies, perhaps more conscious of their constitution, take an opposite view. In the French tradition, for example, both Right and Left have looked upon the formalisation of ethnic and religious distinctions with alarm, as divisive and harmful, seeking instead individual equality under a common citizenship with shared constitutional values — a concept which we might revive.

As far as I can see from press snippets, John Townend claimed that immigrants, or at least their descendants, should adapt to become part of the country in which they have chosen to live. As a general proposition, this seems to be a proper aim of public policy, one widely followed in other countries and in line with natural justice.

The dreaded m-word, however, which no one excuses, sealed his fate. But Townend seemed to be complaining that others (e.g. Mr Cook) had so labelled his constituents, along with all residents of this country, as merely being part of a 'nation of immigrants', for which he used that vulgar synonym.

It would not be surprising if his constituents didn't think much of the suggestion that Britain was just a 'nation of immigrants' (and therefore, of course, had no business objecting to any more settling here). It isn't true. Yet it is one of the supporting myths of the multicultural society; one of the more bizarre inventions of New Labour's New History.

In so far as it means anything, the proposition that Britain is ,a 'nation of immigrants' is contradicted by history, demography and genetics. We cannot know in detail the. ancestry of our people. No population has 'pure' origins; to reject the 'nation of immigrants' label is not to claim that they do. Nonetheless, English population history is known better than almost any other in the world; it has been reconstructed carefully from the 16th century. Although few direct data on migration exist, this demographic reconstruction implies substantial emigration, as we would expect. Immigration forms no part of the story.

Of course, there is always a drift of people in and out over the centuries in all but the most closed societies, and immigrant populations are normal. Some notable episodes have punctuated that small drift of people. The Flemings are a well-known group, for example; but those who list these and other episodes in support of their case seem to have little idea how small such contributions were in comparison with the general population.

Data cannot be precise, but the Flemings seem to have comprised only a fraction of 1 per cent of a population that was then about three million. Later on, up to 100,000 Huguenots, middle-class Protestant refugees — equivalent to about 1 million today — were more numerous, but quickly assimilated.

A similar number of Ashkenazi Jews in the late 19th century made a smaller impression on a population by then risen by natural increase to 30 million. They were soon more British than the British in reducing their birth-rate to low levels, on their way up the social ladder.

The impoverished black servants and slaves of the 18th century are a puzzle. Some British families today claim ancient black ancestry. But most seem to have left no descendants. Blood-group data from blood donors show no trace; the new genetics of mitochondrial DNA and Y chromosomes will clear up the matter.

The Irish, linked to Great Britain for more than a millennium, hardly come into the same category of 'immigrant'. Most of Britain's five million or so Roman Catholics have some Irish ancestry. Today most marry non-Catholics and no longer regard themselves as 'Irish'. The number born in Ireland peaked at 900,000 in the 1970s: 2 per cent of the population, just as in 1841. Today their number is falling as the Irish 'tiger economy' flourishes.

In the remote past, things were different. People lived in Britain for half a million years until the Ice Ages pushed them out. The country, not then an island, was almost uninhabitable until 10,000 years ago. Then, not even Eskimos lived north of Watford. Population drifted back, although from about 6000 BC until 1909 they all had to come by boat. The Anglo-Saxons (originally guest-workers, of course) and the Danes of the Dark Ages were, indeed, the last major colonists. Historians cannot agree whether the RomanoBritish were eliminated or absorbed. Universal Anglo-Saxon place names and the absence of Celtic roots in English suggest genocide, but others claim that no more than 100,000 Saxons arrived over more than a centiny, among well over a million Britons. The hostile takeover by the brutish Norman ruling class had immense cultural and political consequences but was demographically trivial.

Surnames and genes confirm a British population little affected by immigration for a millennium, with many traces of ancient local settlement. The US state department website says so, and the CIA should know, after all. The demographic record tells of Britain and Ireland as countries of emigration, not immigration. From the 16th century, several million people have left for the New World and elsewhere.

Postwar immigration from the New Commonwealth, and more recently from the rest of the world, is different. It has never stopped, and with higher birth-rates the new population continues to grow much faster than the native, from negligible numbers in 1950 to almost four million now. That is nearly 7 per cent of the population of England and Wales. Births to mothers born outside the UK have increased from 12 per cent in 1989 to 14 per cent in 1999. Immigration has grown to record levels, adding 190,000 foreign citizens to the population in 1999 alone and more than 1.2 million since 1990: a new London borough every year and a new conurbation in the decade. Even that does not make us a 'nation of immigrants' yet.

Robin Cook's apotheosis of curry is typical of the banal triviality of arguments in favour of permanent cultural diversity, the rest seeming vague to the point of invisibility, or plainly perverse, like the expensive and divisive babel of language in London which he asked us to celebrate last month. This is insulting to all concerned. There must be more serious grounds for turning the country upside-down. Let us hear them.

Meanwhile, in the real world a multicultural society faces some dilemmas. The problem with 'multicultural' policy is that it is a fundamentalist utopia. It cannot admit the possibility of conflicts between the values, behaviour and loyalties of immigrant populations and those of the natives, and has no principles for determining which should prevail when incompatibilities arise (both, of course, are equally `valid'). It is attractive to those who dislike their own old, conservative, racist and off-message society, and who see new cultural preferences as a way of displacing it. Yet its practical problems do not lack evidence. They include the poverty arising from some minority family patterns, variously of lone parenthood and large family size; the incompatibility of strongly held traditional views on female position and family honour with modern aspirations to gender equality; the explicit rejection of integration implicit in the continuation of arranged marriages and the increased immigration arising from it; and the perpetuation in Britain of the ethnic conflicts of the Third World seen recently in Oldham. While most increase in crime is not due to ethnic minorities, the disproportionate contribution of ethnicminority youth to London's street crime is a dismal fact. Gradual adaptation to a new life should make at least some of these issues transient. But that, it seems, is not to be encouraged.

What is Conservative policy on these issues? If anything, it now seems further Left than Labour's. What, exactly, do Mr Hague, Lord Taylor and the others want us to believe in order that we should all be saved, and to reject that which makes Townend such a heretic?

The greater damage to the Conservative party is not from Townend's clumsy remarks, which Hague could easily have brushed aside, as Bruce Anderson suggested last week. Much worse, Hague's misjudgments in falling into the CRE trap were compounded by being panicked by Lord Taylor's threat and by the intolerance of his party's liberals into what seems to be a blanket endorsement of a multicultural policy and of the unqualified benefits of immigration, formerly a highly contentious issue. Is the Conservative party now, for fear of the CRE, committed to the ethnically corporate state which multiculturalism implies? If existing multicultural 'diversity' may now only be uncritically 'celebrated', whatever its manifestations, what justification remains for policies which limit immigration, or for that matter asylum-claiming? His illiberal response in suppressing widely held and arguable views on immigration and on the country's cultural future have created a oneparty state on the issue. No respectable political party now permits dissent on these matters; the egregious CRE has been elevated to a position beyond criticism.

This has arisen because a few embarrassed politicians lack the knowledge or wit to see difficulties in our present situation regarding immigration and its consequences, lack the ability to find reasonable words for reasonable concerns, or lack the courage to speak of them.