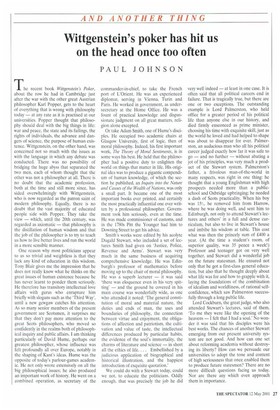 Wittgenstein's poker has hit us on the head once too often

The recent book Wittgenstein's Poker, about the row he had in Cambridge just after the war with the other great Austrian philosopher Karl Popper, gets to the heart of everything that is wrong with philosophy today — at any rate as it is practised at our universities. Popper thought that philosophy should deal with the big things in life: war and peace, the state and its failings, the rights of individuals, the advance and dangers of science, the purpose of human existence. Wittgenstein, on the other hand, was concerned not so much with the issues as with the language in which any debate was conducted. There was no possibility of bridging the huge abyss that separated the two men. each of whom thought that the other was not a philosopher at all. There is no doubt that the academic profession, both at the time and still more since, has sided overwhelmingly with Wittgenstein, who is now regarded as the patron saint of modern philosophy. Equally, there is no doubt that the vast majority of educated people side with Popper. They take the view — which, until the 20th century, was regarded as axiomatic — that philosophy is the distillation of human wisdom and that the job of the philosopher is to try to teach us how to live better lives and run the world in a more sensible manner.

One reason why most politicians appear to us so trivial and weightless is that they lack any kind of education in this wisdom. Tony Blair gives me the impression that he does not really know what he thinks on the great issues of human existence because he has never learnt to ponder them seriously. He therefore has transitory intellectual love affairs with gurus who enrapture him briefly with slogans such as the 'Third Way', until a new gewgaw catches his attention. As so many senior members of the present government are Scotsmen, it surprises me that they don't pay more attention to the great Scots philosophers, who moved so confidently in the realms both of philosophical inquiry and public affairs. I am thinking particularly of David Hume, perhaps our greatest philosopher, whose influence was felt profoundly all over Europe, notably in the shaping of Kant's ideas. Hume was the opposite of today's parlour-games academic. He not only wrote extensively on all the big philosophical issues; he also produced an important work of history. He went on a combined operation, as secretary of the commander-in-chief, to take the French port of L'Orient. He was an experienced diplomat, serving in Vienna, Turin and Paris. He worked in government, as undersecretary at the Home Office. He was a fount of practical knowledge and dispassionate judgment on all great matters, religion alone excepted.

Or take Adam Smith, one of Hume's disciples. He occupied two academic chairs at Glasgow University, first of logic, then of moral philosophy. Indeed, his first important work, The Mealy of Moral Sentiments, is in some ways his best. He held that the philosopher had a positive duty to enlighten the world on things that matter in life. His original idea was to produce a gigantic compendium of human knowledge, of which the section he published, an Inquiry into the Nature and Causes of the Wealth of Nations, was only a small part. It became one of the most important books ever printed, and certainly the most practically influential one ever written by a professional philosopher. Government took him seriously, even at the time. He was made commissioner of customs, and in the 1780s Pitt the Younger had him to Downing Street to get his advice.

Smith's works were edited by his acolyte Dugald Stewart, who included a set of lectures Smith had given on 'Justice, Police, Revenue and Arms'. Stewart was very much in the same business of acquiring comprehensive knowledge. He was Edinburgh's professor of mathematics before moving up to the chair of moral philosophy. He was a superb lecturer — it was said 'there was eloquence even in his very spitting' — and the ground he covered in his main course was wonderfully wide, as one who attended it noted: `The general constitution of moral and material nature, the duties and ends of man, the uses and boundaries of philosophy, the connection between virtue and enjoyment, the obligations of affection and patriotism, the cultivation and value of taste, the intellectual differences produced by particular habits, the evidence of the soul's immortality, the charms of literature and science — in short all the ethics of life.. . . Embellished by a judicious application of biographical and historical illustration, and the happiest introduction of exquisite quotation.'

We could do with a Stewart today, could we not, to educate the politicians. Oddly enough, that was precisely the job he did very well indeed — at least in one case. It is often said that all political careers end in failure. That is tragically true, but there are one or two exceptions. The outstanding example is Lord Palmerston, who held office for a greater period of his political life than anyone else in our history, and died firmly ensconced as prime minister, choosing his time with exquisite skill, just as the world he loved and had helped to shape was about to disappear for ever. Palmerston, an audacious man who all his political career judged exactly how far it was safe to go — and no further — without abating a jot of his principles, was very much a product of the Stewart system. Palmerston's father, a frivolous man-of-the-world in many respects, was right in one thing: he thought that a young Englishman with high prospects needed more than a publicschool and Oxbridge upbringing: he needed a dash of Scots practicality. When his boy was 15y,, he removed him from Harrow, where he was doing well, and sent him to Edinburgh, not only to attend Stewart's lectures and others' in a full and dense curriculum, but also to live in Stewart's house and imbibe his wisdom at table. This cost what was then the princely sum of £400 a year. (At the time a student's room, of superior quality, was 35 pence a week!) Professor and teenager got on very well together, and Stewart did a wonderful job on the future statesman. He ensured not only that he got a first-class general education, but also that he thought deeply about what life was for and how to grapple with it, laying the foundations of the combination of idealism and worldliness, of rational selfconfidence, which saw Palmerston successfully through a long public life.

Lord Cockburn, the great judge, who also attended Stewart's lectures, said of them, 'To me they were like the opening of the heavens — I felt that I had a soul.' No wonder it was said that his disciples were his best works. The chances of another Stewart emerging from our present university system are not good. And how can one set about reforming academia without destroying its liberty? How can we persuade our universities to adopt the tone and content of high seriousness that once, enabled them to produce future statesmen? There are no more difficult questions facing us today. Nor are there any which even approach them in importance.