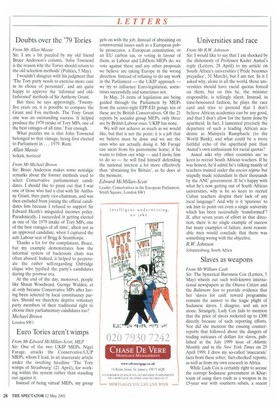 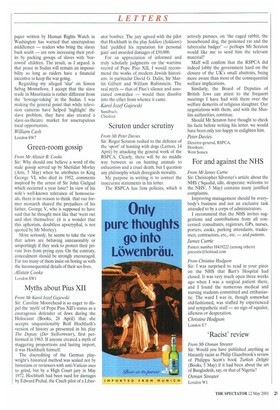 From Mr William Cash Sir: The hysterical Baroness Cox (Letters, 5 May) wheels out such well-known international newspapers as the Ottawa Citizen and the Baltimore Sun to provide evidence that her 'slaves for cash' reward programme remains the answer to the tragic plight of Sudanese slaves. I disagree, and am not alone. Strangely, Lady Cox fails to mention that the price of slaves rocketed up to £300 directly because of such reporting efforts. Nor did she mention the ensuing counterreports that followed about the dangers of trading suitcases of dollars for slaves, published in the July 1999 issue of Atlantic Mond* and in the New York Times on 25 April 1999. I drew my so-called 'inaccurate' facts from these sober, 'fact-checked' reports, as well as from my own research in Africa.

While Lady Cox is certainly right to accuse the corrupt Sudanese government in Khartoum of using slave raids as a weapon in its 15-year war with southern rebels, a recent paper written by Human Rights Watch in Washington has warned that unscrupulous middlemen — traders who bring the slaves back south — are now increasing their profits by packing groups of slaves with 'borrowed children. The result, as I argued, is that peace in Sudan will remain an impossibility so long as raiders have a financial incentive to keep the war going.

Regarding my alleged 'slur' on Simon Sebag Montefiore, I accept that the slave trade in Mauritania is rather different from the 'hostage-taking' in the Sudan. I was making the general point that while television cameras have helped 'highlight' the slave problem, they have also created a slave-as-theatre market for unscrupulous local opportunists.