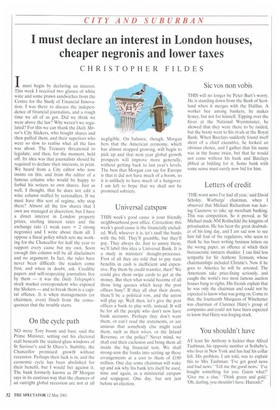 Page 32, 12 May 2001 — I must declare an interest in London houses, cheaper negronis and lower taxes
Close

I must declare an interest in London houses, cheaper negronis and lower taxes

Imust begin by declaring an interest. This week I received two glasses of white wine and some prawn sandwiches from the Centre for the Study of Financial Innovation. I was there to discuss the independence of financial journalists, and a rough time we all of us got. Did we think we were above the law? Why weren't we regulated? For this we can thank the Daily Mirror's City Slickers, who bought shares and then puffed them, and their superiors who were so slow to realise what all the fuss was about. The Treasury threatened to legislate, and then, for the moment, held off. Its idea was that journalists should be required to declare their interests, in print. We heard from a City editor who now insists on this, and from the editor of a famous column who would be happy to forbid his writers to own shares. Just as well, I thought, that he does not edit a wine column staffed by teetotallers. If we must have this sort of regime, why stop there? Almost all the few shares that I own are managed at discretion, but I have a direct interest in London property prices, sterling interest rates and the exchange rate (1 weak euro = 2 strong negronis) and I write about them all. I oppose a fiscal policy which sets me working for the Chancellor for half the year to support every cause but my own. Soon enough this column will be all disclaimers and no argument. In fact, the rules have never been difficult: the readers come first, and when in doubt, ask. Credible papers and self-respecting journalists live by them — it was the Daily Telegraph's stock market correspondent who exposed the Slickers — and to break them is a capital offence. It is when managements (or chairmen, even) flinch from the consequences that the trouble starts.

On the cycle path

NO more Tory boom and bust, said the Prime Minister, setting out his electoral stall beneath the stained-glass windows of St Saviour's and St Olave's. Stability, the Chancellor promised: growth without recession. Perhaps their luck is in, and the economic cycle has been abolished for their benefit, but I would bet against it. The bank formerly known as JP Morgan says in its cautious way that the chances of an outright global recession are not at all negligible. On balance, though, Morgan bets that the American economy, which has almost stopped growing, will begin to pick up and that next year global growth prospects will improve more generally, without getting back to last year's levels. The best that Morgan can say for Europe is that it did not have much of a boom, so it is unlikely to have much of a hangover. I am left to hope that we shall not be promised sobriety.

THIS week's good cause is your friendly neighbourhood post office. Correction: this week's good cause is the financially excluded. Well, whoever it is, let's stuff the banks with the bill. They'll grumble, but they'll pay. They always do. Just to annoy them, we'll label this idea a Universal Bank. It is a study in ministers. thought-processes. First of all they are told that to pay state benefits in cash is inefficient and expensive. Pay them by credit transfer, then? We could give them swipe cards to get at the money. But then what would become of all those long queues which keep the post offices busy? If they all shut their doors, there'll be a political row, and the union will play up. Well then, let's give the post offices a bank to play with, instead. It will be for all the people who don't now have bank accounts. Perhaps they don't want them, or can't read the statements, or are anxious that somebody else might read them, such as their wives, or the Inland Revenue, or the police? Never mind, we shall end their exclusion and bring them all inside the big financial tent. We shall strong-arm the banks into setting up these arrangements at a cost to them of £180 million. One day some chairman will wake up and ask why his bank lets itself be used, time and again, as a ministerial catspaw and scapegoat. One day, but not just before an election.

THIS will no longer be Peter Burt's worry. He is standing down from the Bank of Scotland when it merges with the Halifax. A worker bee among bankers, he makes honey, but not for himself. Tipping over the hives at the National Westminster, he showed that they were there to be raided, but the booty went to his rivals at the Royal Bank. When Barclays suddenly found itself short of a chief executive, he looked an obvious choice, and I gather that his name was in the frame twice, but that he would not come without his bank and Barclays jibbed at bidding for it. Some bank with some sense must surely now bid for him.

'THE worst news I've had all year,. said David Scholey, Warburgs' chairman, when I observed that Michael Richardson was leaving Cazenove to take up merchant banking. This was competition. So it proved, as Sir Michael made NM Rothschild the kingpins of privatisation. He has been the great dealmaker of his long day, and I am sad now to see him fall foul of the regulators, who seem to think he has been writing business letters on the wrong paper, an offence at which their bureaucratic instincts shudder. I can find less sympathy for Sir Anthony Tennant, whose chairmanships included Christie's. Now if he goes to America he will be arrested. The Americans take price-fixing seriously, and caught the world's two most famous auction houses bang to rights. His friends explain that he was only the chairman and could not be expected to know what was going on. Come to that, the fourteenth Marquess of Winchester was chairman of Clarence Hany's group of companies and could not have been expected to know that Hatry was forging stock.

AT least Sir Anthony is luckier than Alfred Taubman, his opposite number at Sotheby's, who lives in New York and has had his collar felt. His problem, I am told, was to explain this to Mrs Taubman: 'I've got good news and bad news.' Tell me the good news.' I've bought something for you. Guess what?' 'Give me a clue.—Think green and gold.' 'Oh, darling, you shouldn't have. Harrods?'