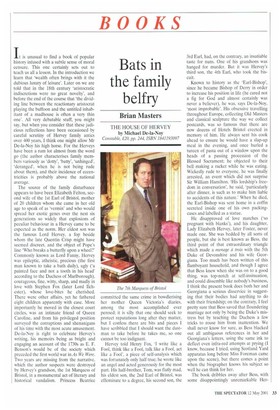 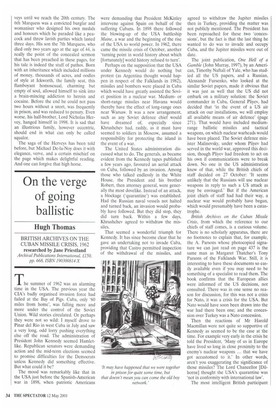 It is unusual to find a book of popular history infused with a subtle sense of moral censure. This one certainly sets out to teach us all a lesson. In the introduction we learn that 'wealth often brings with it the dubious luxury of leisure'. Later on we are told that in the 18th century 'aristocratic indiscretions were no great novelty', and before the end of the course that 'the dividing line between the reactionary aristocrat playing the buffoon and the untitled inhabitant of a madhouse is often a very thin one'. All very debatable stuff, you might say, but when you consider that these judicious reflections have been occasioned by careful scrutiny of Hervey family antics over 400 years, I think one might allow Mr De-la-Noy his high horse. For the Herveys have been a rum lot almost from the word go (the author characterises family members variously as 'dotty', 'batty', 'unhinged', 'deranged', when he is not being rude about them), and their incidence of eccentricities is probably above the national average.

The source of the family disturbance appears to have been Elizabeth Felton, second wife of the 1st Earl of Bristol, mother of 20 children whom she came in her old age to speak of as 'vermin' and who would spread her exotic genes over the next six generations so widely that explosions of peculiar behaviour in a Hervey came to be expected as the norm. Her eldest son was the famous Lord Hervey, a fop beside whom the late Quentin Crisp might have seemed discreet, and the object of Pope's line 'Who breaks a butterfly upon a wheel?' Commonly known as Lord Fanny, Hervey was epileptic, atheistic, precious (the first man known to take a bath daily), ugly Ca painted face and not a tooth in his head' according to the Duchess of Marlborough), courageous, fine, witty, sharp, and madly in love with Stephen Fox (later Lord Ilchester), whose love-bites he cherished. There were other affairs, yet he fathered eight children apparently with ease. More importantly he moved in the closest court circles, was an intimate friend of Queen Caroline, and from his privileged position surveyed the corruptions and shenanigans of his time with the most acute amusement. De-la-Noy is right to celebrate Hervey's writing, his memoirs being as bright and engaging an account of the 1730s as E. F. Benson's would be of the society which preceded the first world war in As We Were. Two years are missing from the narrative, which the author suspects were destroyed by Hervey's grandson, the 1st Marquess of Bristol, in a monumental act of literary and historical vandalism. Princess Beatrice

committed the same crime in bowdlerising her mother Queen Victoria's diaries, among the most accomplished ever penned; it is silly that one should seek to protect reputations long after they matter, but I confess there are bits and pieces I have scribbled that I should want the dustman to take before he takes me, so one cannot be too indignant.

Hervey told Henry Fox, 'I write like a Fool, think like a Fool, talk like a Fool, act like a Fool', a piece of self-analysis which was fortunately only half true; he wrote like an angel and acted generously for the most part. His half-brother, Tom, was flatly mad, his eldest son, the 2nd Earl of Bristol, was effeminate to a degree, his second son, the 3rd Earl, had, on the contrary, an insatiable taste for nuns. One of his grandsons was hanged for murder. But it was Hervey's third son. the 4th Earl, who took the biscuit.

Known to history as the 'Earl-Bishop', since he became Bishop of Derry in order to increase his position in life (he cared not a fig for God and almost certainly was never a believer), he was, says De-la-Noy, 'most improbable'. His obsessive travelling throughout Europe, collecting Old Masters and classical sculpture the way we collect postcards, was so famous that there are now dozens of Hotels Bristol erected in memory of him. He always sent his cook ahead to ensure he would have a slap-up meal in the evening, and once hurled a tureen of pasta out of a window upon the heads of a passing procession of the Blessed Sacrament: he objected to their bell making a racket while he was eating. Wickedly rude to everyone, he was finally arrested, an event which did not surprise Sir William Hamilton. 'His lordship's freedom in conversation', he said, 'particularly after dinner, is such as to make him liable to accidents of this nature.' When he died, the Earl-Bishop was sent home in a coffin secreted inside one of his own packingcases and labelled as a statue.

He disapproved of love matches ('so pregnant with blanks.), and his daughter, Lady Elizabeth Hervey, later Foster, never made one. She was bedded by all sorts of people, but she is best known as Bess, the third point of that extraordinary triangle which made a menage a trois with the 5th Duke of Devonshire and his wife Georgiana. Too much has been written of this flamboyant household, and though I agree that Bess knew when she was on to a good thing, was top-notch at self-insinuation, and could dissemble like nobody's business, I think the present book does both her and Georgiana a serious disservice in suggesting that their bodies had anything to do with their friendship; on the contrary, I feel pretty sure that Bess saved that floundering marriage not only by being the Duke's mistress but by teaching the Duchess a few tricks to rouse him from inattention. We shall never know for sure, as Bess blacked out all ambiguous references in her and Georgiana's letters, using the same ink to deflect even infra-red attempts at prying (I know, because I tried, using Scotland Yard apparatus long before Miss Foreman came upon the scene), but there comes a point when the biographer knows his subject so well he can think for her.

The book dribbles away after Bess, with some disappointingly unremarkable Her veys until we reach the 20th century. The 6th Marquess was a convicted burglar and womaniser who designed his own medals and honours which he paraded like a peacock and threw lavish parties which lasted three days. His son the 7th Marquess, who died only two years ago at the age of 44, is really the point of the concealed sermon that has been preached in these pages, for his tale is indeed the stuff of pathos. Born with an inheritance which included millions of money, thousands of acres, and oodles of style at Ickworth, the family seat, this flamboyant homosexual, charming but empty of soul, allowed himself to sink into a brain-mincing addiction to heroin and cocaine. Before the end he could not pass two hours without a snort, was frequently in prison, and was reduced to penury. Even worse, his half-brother, Lord Nicholas Hervey, hanged himself in 1998. It is sad that an illustrious family, however eccentric, should end in what can only be called squalor.

The saga of the Herveys has been told before, but Michael De-la-Noy does it with elegance, verve, and a certain mischief on the page which makes delightful reading. And one can forgive that high horse.