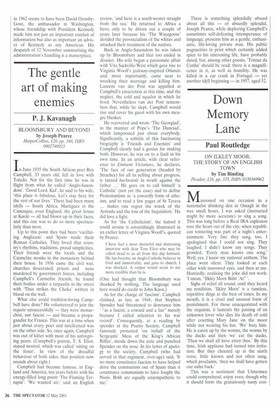 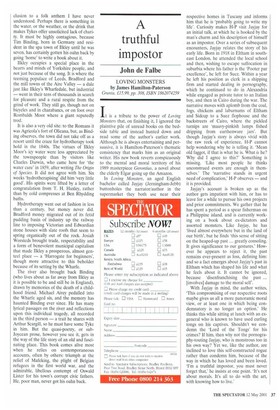 ON ILKLEY MOOR: THE STORY OF AN ENGLISH TOWN by Tim Binding Picador, £16, pp. 335, ISBN 0330369962 Marooned on one occasion in a nationalist drinking den in Omagh in the wee small hours, I was asked (instructed might be more accurate) to sing a song. This was long before a Real IRA explosion tore the heart out of the city, when republican roistering was part of a night's entertainment. Very fine they sang, too. I apologised that I could not sing. They laughed. I didn't know any songs. They growled, 'Every man knows one song.' Well, yes, I knew my national anthem. The place went silent. They looked at each other with narrowed eyes, and then at me. Hurriedly, realising the joke did not work: 'I mean, "Ilkley Moor Baht 'At" '.

Sighs of relief all round, until they heard my rendition. 'Ilkley Moor' is a tuneless, repetitive dirge at the best of times. In my mouth, it is a cruel and unusual form of punishment. For those unacquainted with the requiem, it laments the passing of an unknown lover who dies his death of cold after courting Mary Jane on the moor while not wearing his hat. 'We' bury him. He is eaten up by the worms, the worms by the ducks and then 'we' eat the ducks. 'Then we shall all have etten thee.' By this time, Irish applause had turned into irritation. But they cheered up at the ninth verse, little known and not often sung, which proclaims, 'then we shall have gotten our oahn back.'

This was a sentiment that Ulstermen could comprehend, enjoy even, though why it should form the gratuitously nasty con elusion to a folk anthem I have never understood. Perhaps there is something in the water, or the weather, or the drink that makes Tykes offer unsolicited lack of charity. It must be highly contagious, because Tim Binding, born in Germany and resident in the spa town of Ilkley until he was seven, has certainly gotten his oahn back by going 'home' to write a book about it.

Ilkley occupies a special place in the hearts and minds of Yorkshire people, and not just because of the song. It is where the teeming populace of Leeds, Bradford and the mill towns of the Aire Valley — a dale just like Ilkley's Wharfedale, but industrial — went in their tens of thousands in search for pleasure and a rural respite from the grind of work. They still go, though not on bicycles and in charabancs, or on foot over Rombalds Moor where a giant reputedly trod.

It is also a very old site: to the Romans it was Agricola's fort of Olicana, but, as Binding observes, the town did not take off as a resort until the craze for hydrotherapy took hold in the 1840s. The virtues of Ilkley Moor's icy water were less appreciated by the townspeople than by visitors like Charles Darwin, who came here for `the water cure' in 1859, after writing The Origin of Species. It did not agree with him, Six weeks tydrotherapising' did him 'very little good'. His spirits were lifted by a letter of congratulation from T. H. Huxley, rather than by cold compresses at Ben Rhydding baths.

Hydrotherapy went out of fashion in less than a century, but money never did. Bradford money migrated out of its fetid pudding basin of industry up the railway line to imposing Victorian and Edwardian stone houses with slate roofs that seem to spring organically out of the rock. Josiah Worsteds brought trade, respectability and a form of benevolent municipal capitalism that made Ilkley a prosperous, almost genteel place — a 'Harrogate for beginners', though more attractive to this beholder because of its setting by the Wharfe.

The river also brought back Binding (who lives about as far away from Ilkley as it is possible to be and still be in England), drawn by memories of the death of a childhood friend. Michael Airey pedalled into the Wharfe aged six, and the memory has haunted Binding ever since. He has many lyrical passages on the river and reflections upon this individual tragedy, all recorded in the third person — a trait he shares with Arthur Scargill, so he must have some Tyke in him. But the quasi-poetry, or subJoycean prose, however you see it, gets in the way of the life story of an old and fascinating place. This book comes alive most when he relies on contemporaneous accounts, often by others: triumph at the relief of Mafeking, the plight of Belgian refugees in the first world war, and the admirable, libellous contempt of Oswald Lister for his town's corrupt civic fathers. He, poor man, never got his oahn back.