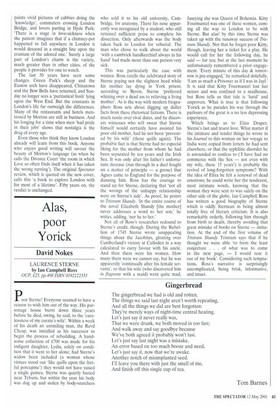 LAURENCE STERNE by Ian Campbell Ross OUP, £25, pp.498 ISBN 0192122355 Poar Sterne! Everyone seemed to have a reason to wish him out of the way. His parsonage house burnt down three years before he died, owing, he said, to the 'carelessness of my curate's wife'. Within a week of his death an unsmiling man, the Revd Cheap, was installed as his successor to begin the process of rebuilding. A handsome collection of £700 was made for his indigent daughter, Lydia, solely on condition that it went to her alone; had Sterne's widow been included (a woman whose virtues stood out 'like quills upon the fretful porcupine') they would not have raised a single guinea. Sterne was quietly buried near Tyburn, but within the year his body was dug up and stolen by body-snatchers

who sold it to his old university, Cambridge, for anatomy. There his nose apparently was recognised by a student, who still retained sufficient poise to complete his dissection. Only afterwards was the body taken back to London for reburial. The man who chose to walk about the world 'with a cambrick handkerchief always in his hand' had made more than one person very sick.

This was particularly the case with women. Ross retells the celebrated story of Sterne paying not the slightest heed while his mother lay dying in York prison; according to Byron, Sterne 'preferred whining over a dead ass to relieving a living mother'. As is the way with modern biographers Ross sets about digging up duller facts from these rhetorical fictions. There is much tussle over rival dates, and he discovers witnesses who will swear that Sterne himself would certainly have assisted his poor old mother, had he not been 'prevented by his wife' (those quills again). The probable fact is that Sterne had no especial liking for the mother from whom he had been separated by ten years and the Irish Sea. It was only after his father's unfortunate decease (run through in a duel fought on a matter of principle — a goose) that Agnes came to England for the purpose of dunning him. Ross has the courage to stand up for Sterne, declaring that 'not all the wrongs of the unhappy relationship were on Sterne's side'. As proof, he points to Tristram Shandy. 'In the entire course of the novel Elizabeth Shandy [the mother] never addresses a word to her son,' he writes. adding, 'nor he to her.'

Not all of Ross's researches redound to Sterne's credit, though. During the Rebellion of 1745 Sterne wrote unappealing things about the Jacobites, gloating over Cumberland's victory at Culloden in a way calculated to curry favour with his uncle. And then there were his women. How many there were we cannot say, but he was apparently 'continually after his female servants', so that his wife (who discovered him in flagrante with a maid) went quite mad, fancying she was Queen of Bohemia. Kitty Fourmantel was one of these women, coming all the way to London to be with Sterne. But alas! by this time Sterne was taken up with the runaway success of Tristrarn Shandy. Not that he forgot poor Kitty, though, leaving her a ticket for a play. He would call for her the following day, he said — for tea; but at the last moment he unfortunately remembered a prior engagement. 'Every minute of this day & tomorrow is pre-engaged,' he remarked dolefully, 'I am as much a Prisoner as if I was in Jayl.' It is said that Kitty Fourmantel lost her senses and was confined to a madhouse. but Ross tells us that tale is 'lurid' and unproven. What is true is that following Yorick as he parades his way through the parlours of the great is a no less depressing experience.

Which brings us to Eliza Draper, Sterne's last and truest love. What matter if the intimate and tender things he wrote in his Journal to this woman on her voyage to India were copied from letters he had sent elsewhere, or that the syphilitic disorder he is astounded to confess to CI have had no commerce with the Sex — not even with my wife, these 15 years') is probably the revival of long-forgotten symptoms? With the idea of Eliza he felt a renewal of dead emotions; he could write her the tenderest, most intimate words, knowing that the woman they were sent to was safely on the other side of the globe. Ian Campbell Ross has written a good biography of Sterne which is oddly Sternean in being almost totally free of literary criticism. It is also remarkably orderly, following him through from birth to death, thereby avoiding that great mistake of books on Sterne — imitation. At the end of the first volume of Tristram Shandy Tristram says that if he thought we were able `to form the least conjecture . . . of what was to come in the next page, — I would tear it out of my book'. Considering such temptations, Ross's narrative is surprisingly uncomplicated, being brisk, informative, and intact.