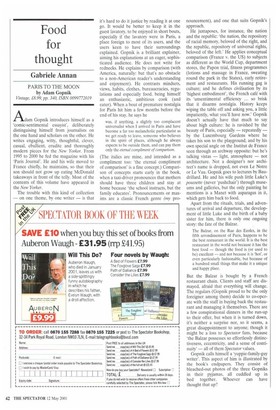 PARIS TO THE MOON by Adam Gopnik

Adam Gopnik introduces himself as a 'comic-sentimental essayist', deliberately distinguising himself from journalists on the one hand and scholars on the other. He writes engaging, witty, thoughtful, clever, casual, ebullient, erudite and thoroughly modern pieces for the New Yorker, From 1995 to 2000 he fed the magazine with his 'Paris Journal'. He and his wife moved to France chiefly, he maintains, so that their son should not grow up eating McDonald takeaways in front of the telly. Most of the contents of this volume have appeared in the New Yorker.

The trouble with this kind of collection — on one theme, by one writer — is that it's hard to do it justice by reading it at one go. It would be better to keep it in the guest lavatory, to be enjoyed in short bouts, especially if the lavatory were in Paris, a place foreign to most of its users, and the users keen to have their surroundings explained. Gopnik is a brilliant explainer, aiming his explanations at an eager, sophisticated audience. He does not write for rednecks. He explains by comparison (with America, naturally: but that's no obstacle to a non-American reader's understanding and enjoyment). He contrasts mindsets, views, habits, clothes, bureaucracies, regulations and especially food, being himself an enthusiastic, ambitious cook (and eater). When a bout of premature nostalgia for Paris hit him a few months before the end of his stay, he says he

was, if anything, a slightly too complacent universalist when I arrived in Paris and have become a far too melancholic particularist as we get ready to leave, someone who believes in the spirit of places, although he always expects to be outside them, and can pay them only the eternal compliment of comparison.

(The italics are mine, and intended as a compliment too: 'the eternal compliment of comparison' is a fine concept.) Comparison of concepts starts early in the book, when a taxi-driver pronounces that mothers should have three children and stay at home because 'the school instructs, but the family educates'. Pronouncements or maxims are a classic French genre (my pro nouncement), and one that suits Gopnik's approach.

He juxtaposes, for instance, the nation and the republic: 'the nation, the repository of racial memory, beloved of the right, and the republic, repository of universal rights, beloved of the left.' He applies conceptual comparison (France v. the US) to subjects as different as the World Cup, department stores, the Papon trial, fitness programmes (lotions and massage in France, sweating round the park in the States), early retirement and restaurants. His running gag is culture; and he defines civilisation by its 'highest embodiment', the French café with its 'unsentimental efficiency so brisk that it disarms nostalgia. History keeps wiping the table off and asking you, a little impatiently, what you'll have now.' Gopnik doesn't actually have that much to say about high culture: he is ravished by the beauty of Paris, especially — repeatedly — by the Luxembourg Gardens where he takes his son to the playground, and by his own special angle on the Institut de France seen through an archway opposite: but he's talking vistas — light, atmosphere — not architecture. Not a designer's nor architect's name is dropped, not even Le Notre or Le Vau. Gopnik goes to lectures by Baudrillard. He and his wife push little Luke's poussette (never 'pushchair') through museums and galleries, but the only painting he mentions is a Manet with asparagus in it, which gets him back to food.

Apart from the rituals, trials, and adventures of arrival and departure, the development of little Luke and the birth of a baby sister for him, there is only one ongoing story: the fate of the Balzar.

But the Balzar is bought by a French restaurant chain. Clients and staff are dismayed, afraid that everything will change. The regulars (Gopnik proud to be the only foreigner among them) decide to co-operate with the staff in buying back the restaurant and managing it themselves. There are a few conspirational dinners in the run-up to their offer, but when it is turned down, it's neither a surprise nor, so it seems, a great disappointment to anyone; though it might be a loss to Spectator fans, because 'the Balzar possesses so effortlessly distinctiveness, eccentricity, and a sense of continuity' — all of them Spectator values.

Gopnik calls himself a yuppie-family-guy writer'. This aspect of him is illustrated by the book's endpapers. They consist of bleached-out photos of the three Gopniks in their pyjamas, all cuddled up in bed together. Whoever can have thought that up?