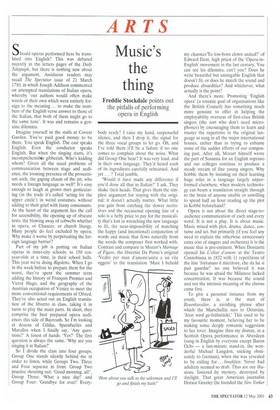 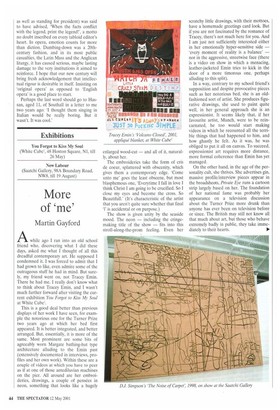 Freddie Stoekdale points out the pitfalls of performing opera in English Should operas performed here be translated into English? This was debated recently in the letters pages of the Daily Telegraph, but there is nothing new about the argument. Assiduous readers may recall The Spectator issue of 21 March 1710, in which Joseph Addison commented on attempted translations of Italian opera, whereby 'our authors would often make words of their own which were entirely foreign to the meaning ... to make the numbers of the English verse answer to those of the Italian, that both of them might go to the same tune'. It was and remains a genuine dilemma.

Imagine yourself in the stalls at Covent Garden. You've paid good money to be there. You speak English. The cast speaks English. Even the conductor speaks English. But when the singing starts, it's incomprehensible gibberish. Who's kidding whom? Given all the usual problems of communication between stage and audience, the looming presence of the proscenium arch, the gaping chasm of the pit, who needs a foreign language as well? It's easy enough to laugh at grown men gesticulating (in the trade it's called 'acting for the upper circle') in weird costumes, without adding to their grief with funny consonants. At the heart of the argument lies the call for accessibility, the opening up of obscure texts, the blowing away of cobwebs whether in opera. or Chaucer, or church liturgy. Many people do feel excluded by opera. Why make it worse by perpetuating the foreign language barrier?

Part of my job is putting on Italian operas in inner-city schools: to 150 tenyear-olds at a time, in their school halls. This year we're doing Rigoletto. When I go in the week before to prepare them for the worst, they've spent the summer term adding the history of Francois Premier and Victor Hugo, and the geography of the Austrian occupation of Venice to meet the more conventional requirements of Ofsted. They've also acted out an English translation of the libretto in class, taking it in turns to play the main parts. In short, they comprise the best prepared opera audiences this side of Bayreuth. So I'm looking at dozens of Gildas, Sparafuciles and Marullos when I finally say, 'Any questions?' A forest of hands. 'Yes?' The first question is always the same. 'Why are you singing it in Italian?'

So I divide the class into four groups. Group One stands silently behind me in order to listen. while Groups Two, Three and Four separate in front. Group Two practise shouting out: 'Good morning. all!', Group Three: 'What a nice day!' and Group Four: 'Goodbye for ever!' Every body ready? I raise my hand, suspenseful silence, and then I drop it, the signal for the three vocal groups to let go. Oh, and I've told them it'll be a failure if no one comes to complain about the noise. What did Group One hear? It was very loud, and in their own language. They'd heard each of its ingredients carefully rehearsed. And yet. . ? Total jumble.

'Would it have made any difference if you'd done all that in Italian?' I ask. They shake their heads. That gives them the simplest argument for staying with the original: it doesn't actually matter. What little you gain from catching the slower recitatives and the occasional opening line of a solo is a hefty price to pay for the musicality that's lost in wrenching the new language to fit, the near-impossibility of matching the happy (and intentional) conjunction of words and music that flows naturally from the words the composer first worked with. Contrast and compare in Mozart's Marriage of Figaro, the librettist Da Ponte's original Nedra per man d'amore/unita a un vile oggeto' to the translation 'Must I behold my charmer/To low-born clown united?' of Edward Dent, high priest of the 'Opera-inEnglish' movement in the last century. You can see his dilemma, can't you? Does he write beautiful but unsingable English that doesn't fit, or does he match the sound and produce absurdities? And whichever, what actually is the point?

And there's more. Promoting 'English opera' (a totemic goal of organisations like the British Council) has something much more genuine to offer in helping the employability overseas of first-class British singers (the sort who don't need microphones) by encouraging them to learn and master the repertoire in the original language as sung in all the major international houses, rather than in trying to exhume some of the sadder efforts of our composing past. After all, Mozart himself wrote the part of Susanna for an English soprano and our colleges continue to produce a steady stream of fine young singers. Why hobble them by insisting on their learning huge roles in a language largely unperformed elsewhere, when modern technology can beam a translation straight through to the brain of anyone unable or unwilling to spend half an hour reading up the plot in Kobbe beforehand?

Opera is not about the direct stage-toaudience communication of each and every word. It is not a play. It is about music. Music mixed with plot, drama, dance, costume and set, but primarily (if you feel any need to explain the otherwise unnecessary extra cost of singers and orchestra) it is the music that is pre-eminent. When Donizetti opened his L'elisir d'amore at the Teatro Cannobiana in 1832 with 11 repetitions of the line lortunato il mietitore, che da lui si pub guardar!' no one believed it was because he was afraid the Milanese lacked concentration. It was because the sound and not the intrinsic meaning of the chorus came first.

To give a personal instance from my youth, there is, at the start of Rosenkavalier, a ravishing phrase after which the Marschallin says to Octavian, 'Jetzt wird ge-fraistiickt; This used to be my favourite moment, believing her to be making some deeply romantic suggestion to her lover. Imagine then my dismay, at a Scottish Opera performance in Aberdeen (sung in English by everyone except Baron Ochs — a last-minute stand-in, the wonderful Michael Langdon, sticking obstinately to German), when she was revealed to be calling for .. breakfast. Never had adultery seemed so drab. Thus are our illusions, fostered .by mystery, destroyed by daylight. That great American journalist Horace Greeley (he founded the New Yorker as well as standing for president) was said to have advised, 'When the facts conflict with the legend, print the legend!', a motto no doubt inscribed on every tabloid editor's heart. In opera, emotion counts for more than diction. Dumbing-down was a 20thcentury fashion, and in its most public casualties, the Latin Mass and the Anglican liturgy, it has caused serious, maybe lasting damage to the very institutions it aimed to reinforce. I hope that our new century will bring fresh acknowledgement that intellectual rigour is desirable in itself. Insisting on 'original opera' as opposed to 'English opera' is a good place to start.

Perhaps the last word should go to Hassan, aged 11, of Southall in a letter to me two years ago: 'I thought them singing in Italian would be really boring. But it wasn't. It was cool.'