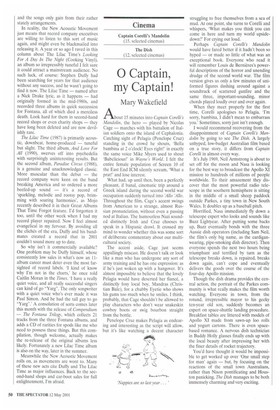 About 15 minutes into Captain Corelli's Mandolin, the hero — played by Nicolas Cage — marches with his battalion of Italian soldiers onto the island of Cephalonia. Catching sight of Pelagia (Penelope Cruz) standing in the crowd he shouts, 'Bella bambina at 2 o'clock! Eyes right!' in exactly the same voice Mike Myers used to shout `Babelicious !' in Wayne's World. I felt the entire female population of Screen 10 of the East End ICM silently scream, 'What a prat!' and lose interest.

What had, up until then, been a perfectly pleasant, if banal, cinematic trip around a Greek island during the second world war occupation suddenly turned into 'Alto 'Alio. Throughout the film, Cage's accent swings from American to a strange, almost Russian pronunciation, without even a passing nod at Italian. The humourless Nazi sounded distinctly Irish and Cruz chooses to speak in a Hispanic drawl. It crossed my mind to wonder whether this was some sort of deliberate commentary about our multicultural society.

The accent aside, Cage just seems appallingly miscast. He doesn't talk or look like a man who has undergone any sort of army training and he has one expression: as if he's just woken up with a hangover. It's almost impossible to believe that the lovely Pelagia would have deserted her fiancé, a distinctly foxy local boy, Mandras (Christian Bale), for a chubby Eyetie who shows his gums too much when he smiles. I think, probably, that Cage shouldn't be allowed to play characters who don't wear snakeskin cowboy boots or swig bourbon straight from the bottle.

Penelope Cruz makes Pelagia as endearing and interesting as the script will allow, but it's like watching a decent character

struggling to free themselves from a sea of mud. At one point, she turns to Corelli and whispers, 'What makes you think you can come in here and turn my world upsidedown?' For crying out loud.

Perhaps Captain Corelli's Mandolin would have fared better if it hadn't been so hyped — or made so little of what was an exceptional book. Everyone who read it will remember Louis de Bernieres's powerful descriptions of the horror and unending drudge of the second world war. The film version gives us only a few minutes of uniformed figures dashing around against a soundtrack of scattered gunfire and the same three, important-sounding, minor chords played loudly over and over again.

When they meet properly for the first time, Corelli apologises to Pelagia, `I'm sorry, bambina, I didn't mean to embarrass you.' Sometimes, sorry just isn't enough.

I would recommend recovering from the disappointment of Captain Corelli's Mandolin by going to see The Dish. A largely unhyped, low-budget Australian film based on a true story, it differs from Captain Corelli in almost every way.

It's July 1969, Neil Armstrong is about to set off for the moon and Nasa is looking for the best way to broadcast the Apollo XI mission to hundreds of millions of people worldwide. To their amazement they discover that the most powerful radio telescope in the southern hemisphere is sitting in the middle of a small sheep paddock outside Parkes, a tiny town in New South Wales. It doubles up as a baseball pitch.

Horrified, Nasa immediately fly down a telescope expert who looks and sounds like Buzz Lightyear. After putting some backs up, Buzz eventually bonds with the three Aussie dish operators (including Sam Neil, the film's only big name, as the cardiganwearing, pipe-smoking dish director). Then everyone spends the next two hours being triumphant and terrified by turn as the telescope breaks down, is repaired, breaks down again, can't cope and eventually delivers the goods over the course of the four-day Apollo mission.

Though the dish drama provides the central action, the portrait of the Parkes community is what really makes the film worth watching. Everyone in town, from the rotund, irrepressible mayor to his geelcy ten-year old son, suddenly becomes an expert on space-shuttle landing procedure. Breakfast tables are littered with models of Apollo XI made from sawn-up loo rolls and yogurt cartons. There is even spacebased romance. A nervous dish technician in Buddy Holly glasses finally ends up with the local beauty after impressing her with the finer details of rocket trajectory.

You'd have thought it would be impossible to get worked up over 'One small step for man' again — but, by focusing on the reactions of the small town Australians, rather than Nixon pontificating and Houston panicking, The Dish manages to be both immensely charming and very exciting.