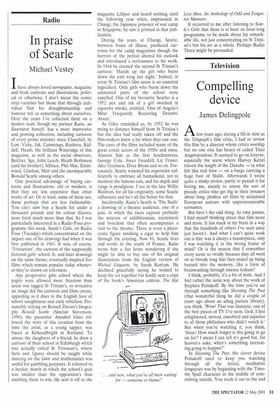 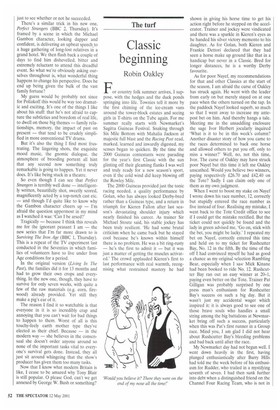 Afew years ago, during a fill-in stint as the Telegraph's film critic, I had to review this film by a director whom critics worship but no one else has heard of called Theo Angelopoulous. It seemed to go on forever, especially the scene where Harvey Keitel travels the length of the Danube — in what felt like real time — on a barge carrying a huge bust of Stalin. Afterwards I wrote quite a stinky review, partly to punish it for boring me, mainly to annoy the sort of pseudy critics who get big in their trousers about long, plotless art films by acclaimed European auteurs with unpronounceable surnames.

But here's the odd thing. As time passes, I find myself thinking about that film more and more. It has stuck in my brain in a way that the hundreds of others I've seen since just haven't. And what I can't quite work out is this: was it always a masterpiece, only I was watching it in the wrong frame of mind? Or is the reason that 1 remember every scene so vividly because they all went on so bloody long that they ended up being burned into the memory, like a form of brainwashing through intense tedium?

I think, probably, it's a bit of both. And I feel rather the same way about the work of Stephen Poliakoff. By the time you've sat through something like Shooting The Past (that wonderful thing he did a couple of years ago about an ailing picture library), you think, 'Wow! That was fantastic, one of the best pieces of TV I've seen. God, I feel enlightened, moved, ennobled and superior to all those philistines who didn't watch it.' But when you're watching it, you think, 'Jesus! How much longer is this going to go on for? I mean I can tell it's good but, for heaven's sake, when's something interesting going to happen?'

In Shooting The Past, the clever device Poliakoff used to keep you watching through all the lyrical, meditative longueurs was by beginning with the Timothy Snail character in the middle of committing suicide. You stuck it out to the end just to see whether or not he succeeded.

There's a similar trick in his new one, Perfect Strangers (BBC 2, Thursday). It's framed by a scene in which the Michael Gambon character, looking dapper and confident, is delivering an upbeat speech to a huge gathering of long-lost relatives in a grand hotel. We then flash back a couple of days to find him dishevelled, bitter and extremely reluctant to attend this dreadful event. So what we're obviously asking ourselves throughout is, what wonderful thing happens to change his perspective. Does he end up being given the bulk of the vast family fortune?

My guess would be probably not since for Poliakoff this would be way too dramatic and exciting. It's one of the things I like about his stuff: that he's not afraid to capture the subtleties and boredom of real life, to dwell on those big themes — family relationships, memory, the impact of past on present — that tend to be crudely simplified in more conventional TV drama.

But it's also the thing I find most frustrating. The lingering shots, the exquisite mood music, the gnomic dialogue, the atmosphere of brooding portent all hint that any second now something truly remarkable is going to happen. Yet it never does. It's like being stuck in a theatre.

So even though I can see that Perfect Strangers is terribly well done — intelligently written, beautifully shot, sweetly scored, magnificently acted by a top-notch cast etc. — and though I'd quite like to know why the Gambon character cheers up — I'm afraid the question uppermost in my mind as I watched it was: 'Can I be arsed?'

Tragically — because I think this reveals me for the ignorant peasant I am — the new series that I'm far more drawn to is Surviving The Iron Age (BBC 1, Thursday). This is a repeat of the TV experiment last conducted in the Seventies in which families of volunteers have to live under Iron Age conditions for a period.

In the original version (Living In The Past), the families did it for 13 months and had to grow their own crops and everything. In the new one, though, they have to survive for only seven weeks, with quite a few of the raw materials (e.g. corn, firewood) already provided. Yet still they make a pig's ear of it.

The reason I find it so watchable is that everyone in it is so incredibly crap and annoying that you can't wait for bad things to happen to them. Worst of all is this touchy-feely earth mother type they've elected as their chief, Because — in the modern way — she believes in the consensual she doesn't order anyone around so none of the important tasks vital to everyone's survival gets done. Instead, they all just sit around whingeing that the show's producer has given them too many tasks.

Now that I know what modern Britain is like, I cease to be amazed why Tony Blair is still popular. 0 please God, can't we get annexed by George W. Bush or something?