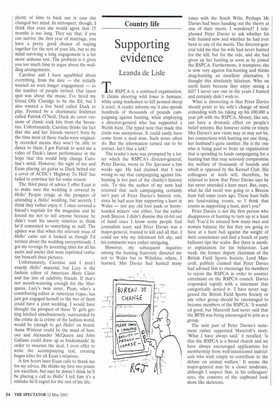 he RSPCA is a confused organisation. It claims shooting wild foxes is humane, while using marksmen to kill penned sheep is cruel. A reader informs me it also spends hundreds of thousands of pounds campaigning against hunting, while employing a director-general who has supported a Welsh hunt. The typed note that made this claim was anonymous. It could easily have come from a mad man. Such notes often do. But the information turned out to be correct. Isn't that a lark?

The reader's note was prompted by a letter which the RSPCA's director-general, Peter Davies, wrote to The Spectator a few weeks ago. He had claimed that I was wrong to say that campaigning against foxhunting is not part of the charity's historic role. To this the author of my note had retorted that such campaigning certainly isn't part of Peter Davies's historic role, since he had seen him supporting a hunt in Wales — not any old foot pack or hornyhanded miners' one either, but the rather posh Brecon. I didn't dismiss this tit-bit out of hand since I know some people find journalists scary and Peter Davies was a major-general, trained to kill and all that. I could see why my informant felt shy, and his comments were rather intriguing.

However, my subsequent inquiries among the hunting fraternity directed me not to Wales but to Wiltshire, where, I learned, Mrs Davies had hunted many times with the South Wilts. Perhaps Mr Davies had been handing out the sherry at one of their meets, I wondered? I telephoned Peter Davies to ask whether his wife hunted now and whether he had ever been to any of the meets. The director-general told me that his wife had never hunted for the kill, but for the ride, and she had given up her hunting as soon as he joined the RSPCA. Furthermore, it transpires, she is now very against fox-hunting and thinks drag-hunting an excellent alternative. I thought this absolutely hilarious. Who on earth hunts because they enjoy seeing a kill? I never saw one in the years I hunted and certainly didn't wish to.

What is interesting is that Peter Davies should point to his wife's change of mind coinciding with his taking up his £80,000 a year job with the RSPCA. Money, like sex, can have a dramatic effect on people's belief systems. But however noble or timely Mrs Davies's new views may or may not be, her connections with hunting are one thing, her husband's quite another. He is the one who is being paid to front an organisation that is spending its funds campaigning for a hunting ban that may seriously compromise the welfare of thousands of hounds and which is opposed by the Kennel Club. His colleagues at work will, therefore, be relieved to know that Peter Davies says he has never attended a hunt meet. But, oops, what he did recall was going to a Brecon hunt ball some years ago. These hunt balls are fund-raising events, so I think that counts as supporting a hunt, don't you?

Peter Davies is not the first person who disapproves of hunting to turn up at a hunt ball. You'd be amazed how many men and women balance the fun they are going to have at a hunt ball against the weight of their consciences and find a bunch of party balloons tips the scales. But there is another explanation for his behaviour. Last week, the former deputy chairman of the British Field Sports Society, Lord Mancroft, publicly claimed that Peter Davies had advised him to encourage his members to rejoin the RSPCA in order to counter extremism on the RSPCA council. Davies responded rapidly with a statement that categorically denied it: 'I have never suggested the British Field Sports Society or any other group should be encouraged to become members of the RSPCA.' It sounded good, but Mancroft had never said that the BFSS was being encouraged to join as a group.

The next part of Peter Davies's statement rather supported Mancroft's story: 'What I have always said,' it recalled, 'is that the RSPCA is a broad church and we have always encouraged applications for membership from well-intentioned individuals who wish simply to contribute to the debate on animal welfare.' It seems the major-general may be a closet moderate, although I suspect that, in his colleagues' eyes, the contents of the cupboard look more like skeletons.