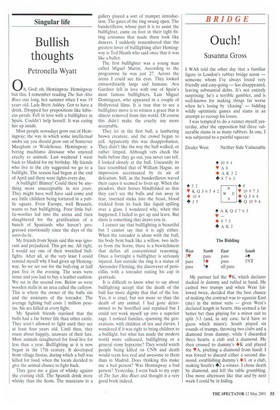 Oh, God; oh, Hemingway. Hemingway but this. I remember reading The Sun Also Rises one long, hot summer when I was 19 years old. Lady Brett Ashley. Got to have a drink. Dropped her prepositions like hibiscus petals. Fell in love with a bullfighter in Spain. Couldn't help herself. It was eating her up inside.

Most people nowadays grow out of Hemingway; the way in which some intellectual snobs say you should grow out of Somerset Maugham or Wodehouse. Hemingway: a boring machismo dinosaur who enjoyed cruelty to animals. Last weekend I went back to Madrid for my birthday. My friends who live in the city suggested we go to a bullfight. The season had begun at the end of April and there were fights every day.

A bullfight! Blimey! Could there be anything more unacceptable in nos jours. They might have well have said come and see little children being tortured in a public square. Even Europe, well Brussels, wants to ban bullfighting. Poor little bullie-woolies led into the arena and then slaughtered for the gratification of a bunch of Spaniards who haven't progressed emotionally since the days of the auto-da-fe.

My friends from Spain said this was ignorant and prejudiced. This got me. All right, I would see one of their wretched bullfights. After all, at the very least I could remind myself why I had given up Hemingway. So we set out for the bull-ring at half past five in the evening. The seats were stone and you had to buy a leather cushion. We sat in the second row. Below us were wooden stalls in an area called the callejon. This is where the owner of the bulls sits and the assistants of the toreador. The average fighting bull costs 1 million pesetas. Six are killed at every fight.

My Spanish friends rejoined that the bulls had a far better life than other cattle. They aren't allowed to fight until they are at least four years old. Until then, they roam about happily, unaware of their fate. Most animals slaughtered for food live for less than a year. Bullfighting as it is now began in the 17th century. It developed from village fiestas, during which a bull was killed for food, when the locals decided to give the animal chance to fight back.

They gave me a glass of whisky against the evening chill. The Spanish drink more whisky than the Scots. The musicians in a gallery played a sort of trumpet introduction. The gates of the ring swung open. The banderilleros, whose part it is to assist the bullfighter, came on foot in their tight fitting costumes that made them look like dancers. I suddenly remembered that the greatest lover of bullfighting after Hemingway is Ted Heath who said once that it was like a ballet.

The first bullfighter was a young man called Miguel Martin. According to the programme he was just 27. Across the arena I could see his eyes. They looked extraordinarily large and humane. Ava Gardner fell in love with one of Spain's most famous bullfighters, Luis Miguel Dominguen, who appeared in a couple of Hollywood films. It is true that to see a bullfighter move is to witness a grace that is almost removed from this world. Of course this didn't make the cruelty any more acceptable.

They let in the first bull, a lumbering brown creature, and the crowd began to yell. Apparently this was disapprobation. They didn't like the way the bull walked, or rather limped. Although vets check the bulls before they go out, you never can tell. I looked closely at the bull. Uncannily its face resembled that of William Hague, an impression accentuated by its air of defeatism. Still, as the banderilleros waved their capes it seemed to liven up. When the picadors, their horses blindfolded so that they can't see the bulls and run away in fear, inserted sticks into the beast, blood trickled from its back like liquid spilling over a glass. I wondered why, when this happened, I failed to get up and leave. But there is something that draws you in.

I cannot say that bullfighting is beautiful but I cannot say that it is ugly either. When the toreador is alone with the bull, his body bent back like a willow, two inches from the horns, there is a bewitchment that defies all conventional reasoning. Once a fortnight a bullfighter is seriously injured. Just outside the ring is a statue of Alexander Fleming, the discoverer of penicillin, with a toreador raising his cap in gratitude.

It is difficult to know what to say about bullfighting accept that the death of the bull has more dignity that that of the fox. Yes, it is cruel, but not more so than the death of any animal. I had gone determined to be horrified and repulsed but I could not work myself up into a superior rage. I noticed families, spanning the generations, with children of ten and eleven. I wondered if it was right to bring children to a bullfight, but what has made the modern world more calloused, bullfighting or a general stony hypocrisy? They would watch people being killed on CNN and death would seem less real and awesome to them than in Madrid. Does thinking this make me a bad person? Was Hemingway a bad person? Yesterday, I went back to my copy of The Sun Also Rises and thought it a very good book indeed.