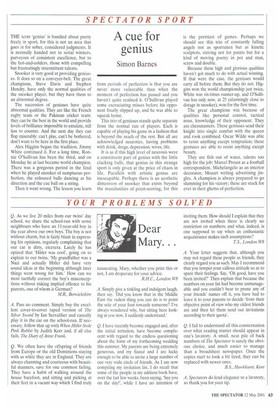 A cue for genius

THE term 'genius' is bandied about pretty freely in sport, for this is not an area that goes in for sober, considered judgments. It is normally handed not to serial winners, purveyors of consistent excellence, but to the hot-and-colders, those with compelling but frustratingly intermittent talents.

Snooker is very good at providing geniuses. It does so on a conveyer-belt. The great champions, Steve Davis and Stephen Hendry, have only the normal qualities of the snooker player, but they have them to an abnormal degree.

The succession of geniuses have quite abnormal qualities. They are like the French rugby team or the Pakistan cricket team: they can be the best in the world and provide levels of brilliance impossible to emulate, still less to counter. And the next day they can flop miserably: can't play, can't be bothered, don't want to be here in the first place.

Alex Higgins began the tradition, Jimmy White continued it, For a long time, Ronnie O'Sullivan has been the third, and on Monday he at last became world champion. There was a gorgeous period in the final when he played snooker of sumptuous perfection, the coloured balls dancing at his direction and the cue ball on a string.

Then it went wrong. The lesson you learn from periods of perfection is that you are never more vulnerable than when the moment of perfection has passed and you haven't quite realised it. O'Sullivan played some excruciating misses before his opponent finally slipped up, and he was able to squeak home.

This trio of geniuses stands quite separate from the normal run of players. Each is capable of playing his game in a fashion that is beyond the reach of the rest, But all are acknowledged neurotics, having problems with drink, drugs, depression, wives, life.

It is as if this high level of neurosis were a constituent part of genius with the little clacking balls, that genius in this strange sport is only given at the price of chaos in life. Parallels with artistic genius are inescapable. Perhaps there is an aesthetic dimension of snooker that exists beyond the mundanities of point-scoring, for this is the prettiest of games. Perhaps we should see this trio of constantly falling angels not as sportsmen but as kinetic sculptors, striving not for points but for a kind of moving poetry in pot and stun, screw and double, Because these high and glorious qualities haven't got much to do with actual winning. If that were the case, the geniuses would carry all before them. But they do not. Higgins won the world championship just twice, White was six-times runner-up, and O'Sullivan has only now, at 25 (alarmingly close to dotage in snooker), won for the first time.

They are fish out of water, talents too high for the job: Marcel Proust as a football correspondent, Michelangelo as an interior decorator, Mozart writing advertising jingles. A champion is always prepared to go slumming for his victory; these are stuck for ever in their ghetto of perfection.