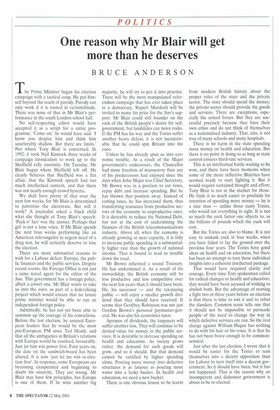 One reason why Mr Blair will get more than he deserves

The Prime Minister began his election campaign with a tactical coup. He put himself beyond the reach of parody. Parody can only work if it is rooted in verisimilitude. There was none of that in Mr Blair's performance in the south London school hall.

No self-respecting editor would have accepted it as a script for a satire programme. 'Come on,' he would have said. 'I know you despise him and think him unutterably shallow. But there are limits.' Not where Tony Blair is concerned. In 1992, it took Neil Kinnock three weeks of campaign intoxication to work up to the Sheffield rally enormity. On Tuesday, Mr Blair began where Sheffield left off. He clearly believes that Sheffield was a flat affair, that the Kinnock speech had too much intellectual content, and that there was not nearly enough crowd hysteria.

We shall have plenty of that over the next few weeks, for Mr Blair is determined to patronise the electorate. But will it work? A journalist asked a black child what she thought of Tony Blair's speech. 'Pack o' lies' was the answer. Perhaps that girl is not a lone voice. If Mr Blair spends the next four weeks performing like an American televangelist in urgent need of a drug test, he will certainly deserve to lose the election.

There are more substantial reasons to wish for a Labour defeat Europe, the public finances and the public services. Despite recent events, the Foreign Office is not just a tame travel agent for the editor of the Sun. This government has a foreign policy, albeit a covert one. Mr Blair wants to take us into the euro, as part of a federalising project which would ensure that no future prime minister would be able to run an independent foreign policy.

Admittedly, he has not yet been able to summon up the courage of his convictions. Before the last election, he assured European leaders that he would be the most pro-European PM since Ted Heath, and that all the ambiguities in Britain's relations with Europe would be resolved, favourably. Just let him win power first. Four years on, the date on the sandwich-board has been altered. It is now 'just let me win re-election first'. In response, some Europeans are becoming exasperated and beginning to doubt his sincerity. They are wrong. Mr Blair may have few principles, but Europe is one of them. If he wins another big

majority, he will try to put it into practice. There will be the most manipulated referendum campaign that has ever taken place in a democracy. Rupert Murdoch will be invited to name his price for the Sun's support. Mr Blair could still founder on the rock of the British people's desire for selfgovernment, but landslides can move rocks. If the PM has his way and the Tories suffer another heavy defeat, it is not inconceivable that he could spin Britain into the euro.

Unless he has already spun us into economic trouble. As a result of the Major government's endeavours, the Chancellor had more freedom of manoeuvre than any of his predecessors had enjoyed since the days when John Major was Chief Secretary. Mr Brown was in a position to cut taxes, repay debt and increase spending. But he has thrown that position away. Instead of cutting taxes, he has increased them, thus transferring resources from productive sectors of the economy to unproductive ones. It is desirable to reduce the National Debt, but not at the cost of undermining the finances of the British telecommunications industry. Above all, when the economy is already growing at near capacity, it is folly to increase public spending at a substantially higher rate than the growth of national income. That is bound to lead to trouble down the road.

Mr Brown inherited a sound Treasury. He has undermined it. As a result of his stewardship, the British economy will be less productive and less competitive over the next few years than it should have been. He, his successor — and the tax-paying public — will enjoy a smaller growth dividend than they should have received. It seems that Geoffrey Robinson was not just Gordon Brown's personal paymaster-general. He was also his economics tutor.

Apropos of dividends, the taxpayers will suffer another loss. They will continue to be denied value for money in the public services. It is desirable to increase spending on health and education. As society grows richer, the demand for such goods will grow, and so it should. But that demand cannot be satisfied by higher spending alone. Pouring more money into defective structures is as fatuous as pouring more water into a leaky bucket. In health and education, we need a new bucket.

There is one obvious lesson to be learnt from modern British history about the proper roles of the state and the private sector. The state should spend the money; the private sector should provide the goods and services. There are exceptions, especially the armed forces. But they are successful precisely because they have their own ethos and do not think of themselves as a nationalised industry. That, alas, is not true of many schools and many hospitals.

There is no harm in the state spending more money on health and education. But there is no point in doing so as long as state control ensures third-rate services.

This is an intellectual battle waiting to be won, and there have been moments when some of the more reflective Blairites have seemed ready to start fighting it. But it would require sustained thought and effort; Tony Blair is not in the market for those. He finds it so much easier to proclaim his intention of spending more money — he is a nice man — unlike those nasty Tories, who would cut everything in sight. It is not so much the yuck factor one objects to, as the billions of pounds which the yuck will cost.

But the Tories are also to blame. It is not easy to unmask yuck in four weeks, when you have failed to lay the ground over the previous four years. The Tories have good ideas on health and on education, but there has been no attempt to turn these individual insights into a coherent intellectual package.

That would have required clarity and courage. Every time Tory spokesmen called for radical changes to health and education, they would have been accused of wishing to abolish both. But the advantage of starting a fight two or three years before an election is that there is time to win it and to rebut the slanders. Common sense tells one that it should not be impossible to persuade people of the need to change the way in which defective services are run. So the real charge against William Hague has nothing to do with his hair or his voice. It is that he has not been brave enough to be commonsensical.

Just after the last election, I wrote that it would be easier for the Tories to turn themselves into a decent opposition than for Labour to turn itself into a decent government. So it should have been, but it has not happened. That is the reason why an incompetent and dishonest government is about to be re-elected.