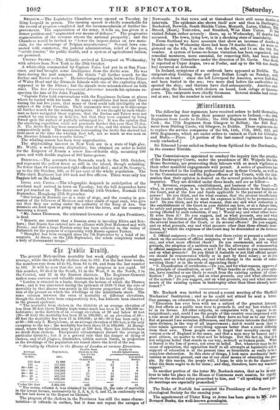 The general Metropolitan mortality last week slightly exceeded the average, while the deaths by cholera rose to 102. For the last four weeks, the numbers rose from 45 to 83, from 83 to 99, and from the last number to 102. It will be seen that the rate of the progress is not rapid. Of this number, 59 died in the South, 11 in the West, 9 in the North, 2 in the Central, and 21 in the Eastern districts. The Registrar-General makes some curious and valuable statements in his last report. "London is situated in a basin, through the bottom of which the Thames flows; and it was discovered during the epidemic of 1848-'9 that the rate of mortality by that disease was nearly in the inverse proportion of the eleva- tion of the ground on which the dwellings of the inhabitants stood. The same relation between the rates of mortality at different elevations, though the deaths have been comparatively few, has hitherto been observed in the present epidemic. " The mortality from cholera in the districts at an average elevation of less than 20 feet above Trinity high-water-mark has been 31 in 100,000 in- habitants; in the districts of an average elevation of 20 and below 40 feet (20-40 feet) the mortality has been 16 in 100,000 ; at an elevation of 40- 60 feet the mortality has been 11 in 100,000; at 60-80 it has been only 4; -at 80-100 only 3. Marylebone, at an average elevation of 100 feet, is the only -exception to the law ; the mortality has been there 13 in 100,000. At Hamp- stead, where the elevation may be put at 3.50 feet, there has hitherto been no death from cholera. Exceptional circumstances disturb the average in particular districts; but it is a general rule that the danger of dying of cholerand of all plagues, diminishes, within certain limits, in proportion d as the dwellings of the population are raised above the level of the sea. "Mortality by Cholera in the Houses of London at various Elevations.

Deaths from Deaths to Average Population, Cholera in the 100,000 Inhabitants.

Newcastle. In that town and at Gateshead there still occur deaths at intervals. The epidemic also shows itself now and then in Darlington, Rocheford, Berwick, South Shields Union, Morpetb, Luton, Clifton, Ely Strood, (Kent,) Tenterden, and Stratford, West Ham Union, It has visited Bedlam rather severely : there, up to Wednesday, 37 deaths had occurred. The town, lying low, is in a shocking state of insalubrity. From Scotland we have accounts that show an increase of deaths in Dundee—up to Wednesday there had been 78 deaths there; 14 were re. gistered on the 4tb, 9 on the 6th, 5 on the 8th, and 14 on the 9th No. vember. A system of house-to-house visitation has been organized, end remedial measures, more essential, for removing filth, bad been taken by the Sanitary Committee under the direction of Dr. Gavin. One death is reported at Cupar Angus, two at Forfar, and up to the 8th ten deaths had occurred at Arbroath.

In Ireland, symptoms of an outbreak have appeared at Dublin. The emigrant-ship Guiding Star put into Belfast Lough on Sunday, with cholera on board : since she left Liverpool for America, seven had died, and been buried in the sea; two more died before the authorities in- spected the ship; and thirteen have died subsequently. Another emi- grant-ship, the Kosauth, with cholera on board, took refuge at Queens- town. The emigrants were chiefly Germans. Several deaths had occur- red at sea ; but the number is not stated.