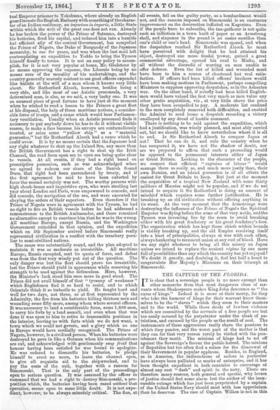 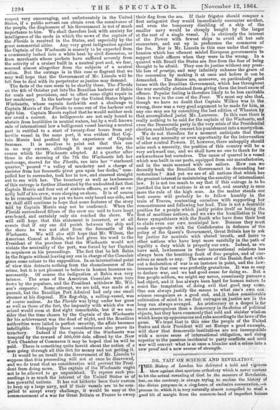 THE CAPTURE OF THE FLORIDA.

Iis clear that a sovereign people is no more exempt than 1 other monarchs from that most dangerous class of ser- vants whom Shakespeare makes King John denounce as " the curse of kings." Indeed it is more at their mercy, for they who take the humour of kings for their warrant know them- selves to be the " slaves" which they seem to their masters and to the world. While those deeds of lawless violence which are committed by the servants of a free people are but too easily covered by the perpetrator under the cloak of pa- triotism, and excused by the people as the result of zeal. The instruments of these aggressions really share the passions to which they pander, and the worst part of the matter is that they can for that very reason rarely be visited with the pun- ishment they merit. The minions of kings had to set off against the Sovereign's favour the public hatred. The minions of Republics but too often find a solace for the disavowal of their Government in popular applause. Besides, in England, as in America, the indiscretions of sailors in particular have always been palliated as marks of enterprise, and it has been thought expedient in both countries to encourage at almost any cost " dash" and spirit in the navy. There are therefore many reasons, both general and special, why lovers of justice should feel some alarm lest the author of the inex- cusable outrage which has just been perpetrated by a captain of the United States Navy should meet with less opprobrium than ho deserves. The case of Captain Wilkes is not in this respect very encouraging, and unfortunately in the United States, if a public servant can obtain even the connivance of the people, the displeasure of his Government is not of much importance to him. We shall therefore look with anxiety for intelligence of the mode in which the news of the capture of the Florida is received in the States, and especially by the great commercial cities. Any very great indignation against the Captain of the Wachusetts is scarcely to be expected from a community lashed into a white heat by civil dissension, or from merchants whose pockets have suffered severely from the activity of a cruiser built in a neutral port and, we fear, manned almost altogether from the subjects of a neutral nation. But the outrage is in this case so flagrant that we may well hope that the Government of Mr. Lincoln will be left free to deal with its perpetrator as justice may demand.

The facts of the case seem to be shortly these. The Florida on the ith of October put into the Brazilian harbour of Bahia for coals and provisions, and to effect some slight repair in her machinery. In the harbour lay the United States frigate Wachusetts, whose captain forthwith sent a challenge to Captain Morris of the Florida to come out of the harbour and fight him. Captain Morris replied that he would neither seek nor avoid a contest. As belligerents are not only bound to abstain from hostilities in neutral waters, but by a well-known rule of international law a belligerent vessel leaving a neutral port is entitled to a start of twenty-four hours from any hostile vessel in the same port, it was evident that Cap- tain Morris had profited by the experience of Captain Semmes. It is needless to point out that this can in no way excuse, although it may account for, the course which the Wachusetts adopted. At a quarter after three in the morning of the 7th the Wachusetts left her anchorage, steered for the Florida, ran into her " starboard quarter," poured " a volley of musketry and a charge of canister from her forecastle pivot gun upon her decks," com- pelled her to surrender, took her in tow, and steamed straight out to sea with her. The treachery as well as lawlessness of this outrage is further illustrated by the undoubted fact that Captain Morris and four out of sixteen officers, as well as ex- actly half of his crow, were sleeping on shore. It is of course to be remembered that as yet we have only heard one side, and we shall still continue to hope that some features of the story told by Captain Morris may not be confirmed. When the Florida surrendered fifteen of the crew are said to have leapt overboard, and certainly only six reached the shore. We will still hope that this statement is incorrect, or at all events that if any one did perish between the ship and the shorn he was not shot from the forecastle of the Wachusetts. We will also still hope that Mr. Wilson, the American Consul at Bahia, who had given his word to the President of the province that the Wachusetts would not violate the neutrality of the port, was forced by her Captain to acquiesce in his proceedings. The fact that he left Bahia in the frigate without leaving any one in charge of the Consulate gives some colour to the supposition. In an international point of view this detracts nothing from the shamelessness of the crime, but it is not pleasant to believe in human baseness un- necessarily. Of course the indignation at Bahia was very intense. The arms of the American Consulate were torn down by the populace, and the President withdrew Mr. Wil- son's exequatur. Some attempt, we are told, was made at a pursuit, but the Brazilian Port Admiral had only one small steamer at his disposal. His flag-ship, a sailing-vessel, was of course useless. As the Florida was lying under her guns as well as those of the fort, the impunity with which she was seized would seem at first sight remarkable, but if we con- sider that the time chosen by the Captain of the Wachusetts for his achievement was the dead of night, and the Brazilian authorities were lulled in perfect security, the affair becomes intelligible. Unhappily these considerations also prove its treachery. Indeed if the Captain of the Wachusettr was tempted by the reward of 500,000 dole. offered by the New York Chamber of Commerce it may be hoped that he will be paid. There is something quite horrid about the notion of a man going through all this dirt for money and not getting it.

It would be an insult to the Government of Mr. Lincoln to suppose that this proceeding will not at once bo disavowed, and we do trust that no consideration will prevent the Presi• dent from doing more. The captain of the Wachusetts ought not to be allowed to go unpunished. To repress such pro- ceedings is as much the interest of the United States as of less powerful nations. It has not hitherto been their custom to keep up a large navy, and if their vessels are to be com- pelled to accept every challenge, it would be easy at the commencement of a war for Great Britain or France to sweep

their flag from the sea. If their frigates should conquer a first antagonist they would immediately encounter another, and even the temporary disabling of a ship of the smaller navy would be cheaply bought by the larger at the cost of a single vessel. It is obviously the interest

of the Power with fewest ships to avoid all but safe encounters, and cut up in preference the commerce of the foe. Nor is Mr. Lincoln in this case under that appre- hension which has oftenest misled European governments to support their officers when they were in the wrong. In a quarrel with Brazil the States are free from the fear of being thought to be afraid. They can do justice without any possi- ble loss of prestige, and may infinitely enhance the grace of the concession by making it at once and before it can be demanded. The States are, moreover, on particularly good terms with the Brazilian Government, which has throughout the war carefully abstained from giving them the least cause of offence. Popular feeling is therefore likely to be less excitable than it was in the case of the Trent. We must say also that,

though we have no doubt that Captain Wilkes was in the

wrong, there was a very good argument to be made for him, as any one may see by consulting the last edition of Wheaton by that accomplished jurist Mr. Laurence. In this case there 18 really nothing to be said for the captain of the Wachusetts, and even the Democratic party in the very crisis of the Presidential

election could hardly convert his punishment into a martyrdom.

We do not therefore for a moment anticipate that there will be any necessity or even opportunity for the intervention of other neutral Powers. If, however, there unhappily should

arise such a necessity, the position of this country will be a very awkward one, and we shall have no one to thank for its

awkwardness but ourselves. The cause of quarrel is a vessel which was built in our ports, equipped from our manufactories, and in the main manned with our sailors. How can we decently back the Brazilian Government in demanding her restoration ? And yet we are of all nations that which has the greatest interest in maintaining the sanctity of international law. It is not too much to say that if this outrage is to bo justified the law of nations is at an end, and anarchy is once more the rule of the high seas. As the matter stands our best course will probably be to follow humbly in the train of France, contenting ourselves with supporting her remonstrances and following her lead. This is not a desirable position for a people which justly prides itself on being the first of maritime nations, and we owe the humiliation to the fierce sympathizers with the South who have done their best

to elude even our own municipal law. Because they must needs co-operate with the Confederates in defiance of the policy of the Queen's Government, Great Britain has to ask for justice for neutrals with abated breath, and leave to other nations who have kept more carefully in the path of legality a duty which is properly our own. Indeed, as we have said, lawlessness in their international relations has always been the besetting fault of free peoples, and of our- selves as much as any. The seizure of the Danish fleet with- out a declaration of war is an instance in point, and the law- lessness in that case was perfectly gratuitous. It was so easy to declare war, and we had good cause for doing so. But a free people seldom, we might say never, consciously pursues a bad object, and it has always been hard for human nature to resist the temptation. of doing evil that good may come. One can always justify the means to what one's own con • science recognizes as a good end, and it takes considerable cultivation of mind to see that outrages on justice are in the long run always avenged. An aristocracy or a despot is far more unscrupulous than a democracy in its choice of political objects, but they have commonly that cold and sinister wisdom which keeps up appearances and robs accordingto the laws of the game. We trust that in this case the people of the United States and their President will set Europe a good example, will show that democratic institutions are not incompatible with a severe sense of international obligation, and rising superior to the passions incidental to party conflicts and civil war will convert what is at once a blunder and a crime into a new proof and a new source of strength.