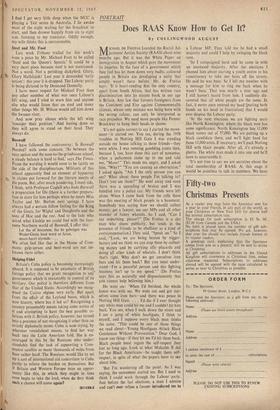 I have followed the controversy: Is Beowulf Needed? with some concern. 'As between the easy option and the nose-to-the-grindstone school, a steady balance is hard to find,' says The Times. From the wording it would seem to be tacitly on the side of the disciplinarians. Militants of this school apparently find an element of hypocrisy in claims put forward for the literary merits of the poem. But, after much pondering, I must side, I think, with Professor Coghill who finds Beowulf a preparation for life (there is a further prepara- tion in store for him perhaps when he meets Miss Taylor and Mr. Burton next spring). I have always had a certain fellow feeling for the King of the Geats, for Wiglaf and Daeghrefn and the sons of Hoc and the rest. And to the lady who asked what kinship we could feel with the fear- some Northern world of Beowulf, I offer this:

We often feel like that in the House of Com- mons; gylp-spraec and beot-word are not un- known there either.