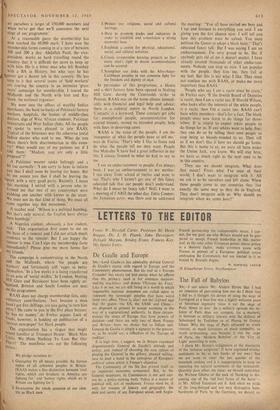 Sts,—Lord Gladwyn has admirably defined General de Gaulle's stance with regard to Europe and the Community phenomenon. But his zeal as a 'Europe Crusader' has surely led him astray when he affirms that the primary need is for common decision- making machinery and damns l'Europe des Etats.' Like it or not, we are still living in a world in which responsible national statesmen are called upon to represent the 'sovereign' peoples that have voted them into office. There is, alas! not the slightest sign that the giants—the US, the USSR and China— are disposed at present to accept anything in the way of a supranational authority. In these circum- stances the slates of Europe that have powers of decision---and there are only two of them, France and Britain--have no choice but to follow suit. General de Gaulle is simply a signpost to the present, or, as he would say, a reflection of the 'Europe of realities.'

It is high time, I suggest, we in Britain examined dispassionately General de Gaulle's attitude and policy, and, instead of choosing the easy option of placing the General in the pillory, showed willing- ness to lend a hand in the enterprise of European political union which is France's objective. The Community of the Six has proved itself as an ingenious economic compound. But, as the General maintains, its Commission is not and can- not be, a policy-making body. Policy is a matter of political will, not of machinery. France must he, if only for reasons of history and geography, the core and centre of any European union, and Anglo- French partnership the indispensable nexus. I can- not, for my part, see why Britain should not be pre- pared to accept French leadership in this matter and, as the only other European power whose policy is a decisive factor, make common cause with France in pursuit of a European political union embracing the Community but not limited to it or bound by Brussels dogma.