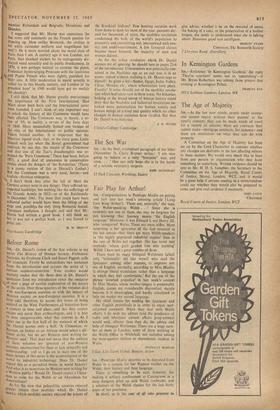 SIR,- Congratulations to Penelope Maslin on getting one fact into last week's amusing article ('Long Live King Arthur'). 'There are, naturally,' she says, 'the Welsh-speaking Welsh . . .' Since she is evidently not one of them, she may be forgiven for not knowing that Saesneg means 'the English language.' Moreover it was Edward I, not Henry III, who 'conquered' Wales. These are mere trines. More surprising is her ignorance of the fact revealed in the last census—that there are more Welsh-speakers in 'the highly populated industrial regions' than in the rest of Wales put together. She has never met anybody 'whose guilt goaded him into learning' Welsh. I have met a great number of them.

There must be many bilingual Welshmen (albeit only 'technically' so) like myself who read the Spectator, among other reasons, to improve our use of English, normally, according to Miss Maslin, 'a strange literal translation rather than a language in which they feel comfortable.' But the use of the phrase 'inverted prejudice' in last week's context by Miss Maslin, whose mother-tongue is presumably English, causes me considerable discomfort, mainly because it is meaningless, and hardly calculated to help me master my second language.

My chief reason for reading the Spectator and other English periodicals is in order to enjoy well- informed comment. When they deal with Welsh affairs, I do wish the editors (and the producers of radio and. television current affairs programmes) would seek, oftener than they do, the advice and help of bilingual Welshmen. There are a huge num- ber of them in London, some of them working at the Welsh Office in Whitehall, not included among the three-quarter million or thereabouts resident in Wales.