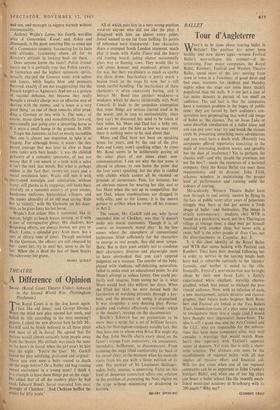 WHAT'S to be done about touring ballet in Britain? The position has never been healthy and now shows signs—witness Festival Ballet's near-collapse this summer—of de- teriorating. Four major companies, the Royal Ballet, Rambert, Festival and Western Theatre Ballet, spend most of the year moving from town to town in a Totentanz of good dates and bad ones, matinees for children and Monday nights when the stage can seem more thickly populated than the stalls. It is not just a case of too many dancers in pursuit of too small an audience. The sad fact is that the companies have a common problem in the bogey of public taste: they are forced by their audience's con- servatism into perpetuating that weird old image of ballet as 'the classics.' Put on Swan Lake or some dwarfish simulacrum of a ballet Blanc and you can pay your way; try and break the vicious circle by presenting something more adventurous and you must have a death wish. (Recently two companies offered repertories consisting in the main of interesting modern works, and speedily but the dust of insolvency.) Yet to perform the classics well—and why should the provinces not see the best?—needs the resources of a national company. Only the Royal Ballet can meet these requirements, and its director, John Field, achieves wonders in maintaining the proper level of performance and training amid the ardours of touring.

Miraculously, Western Theatre Ballet have won through to real artistic success by flying in the face of public taste; after years of penurious struggle they have at last got across a fresh image of ballet—and themselves. The image is strictly contemporary : madness chez WTB is found in a psychiatric ward, not in a Thuringian village at vintage time; a chap may get himself involved with another chap, but never with a swan; hell is the other people of Huis Clos, not the divertissements in Coppelia, Act. 3.

It is this clear identity of the Royal Ballet and WTB that seems lacking with Festival and Rambert. They have their devoted following but in order to survive in the touring jungle both have had to subscribe variously to the 'classics' formula, and neither is suited to the role. Ironically, Festival's near-extinction was brought about by their new Swan Lake. a flashily caparisoned white elephant, invisibly choreo- graphed, which was meant to enchant the pro- vincial audience. Now, with an infusion of cash, a new management, artistic director and choreo- grapher, their future looks brighter. Both Ram- bert and Festival are linked in the Two Ballets Trust, foundation-stone of a plan some years ago to amalgamate them into a single (and I would have thought very impressive) dance-force. The idea is still a good one, and the Arts Council and the GLC, who arc responsible for the subven- tions that keep these companies alive, may well consider a marriage that would match Ram- beta's fine repertory with Festival's superior roster of dancers. Yet even this is only a short- term solution. The ultimate aim must be the

establishment of regional ballet, with all that implies of massive effort and financial aid. Will the day come when one of our regional .companies can be as important as John Cranko's Stuttgart Ballet, and when one of our big cities can boast a ballet school like the recently estab- lished municipal academy in Strasbourg with its 200 pupils? Why not?