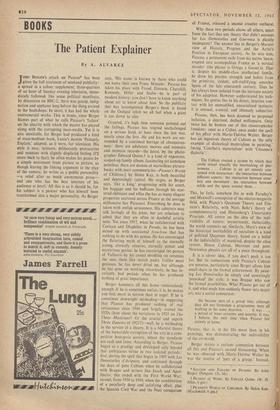 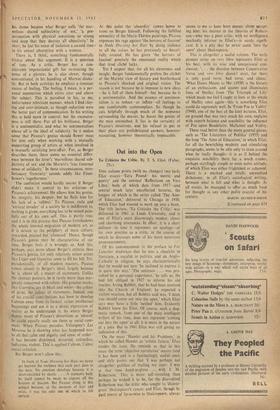 By A. ALVAREZ TORN BERGER'S attack on Picasso* has been j given the full treatment of weekend publicity: a spread in a colour supplement, three-quarters of an hour of Sunday evening television, imme- diately followed, like some political manifesto, by discussion on BBC-2; there was gossip, indig- nation and applause long before the thing arrived in the bookshops. In short, it has had the whole controversial works. This is ironic, since Berger blames part of what he calls Picasso's 'failure' on the alacrity with which the master has played along with the corrupting mass-media. Yet it is also inevitable, for Berger had produced a kind of mass-medium book, Lenin's maxim Patiently Explain,' adapted, as it were, for television. His style is easy, intimate, deliberately provocative and resonant with slightly displaced feeling (I'll come back to that); be often makes his points by a simple movement from picture to picture, as though leaving the linking argument to the play of the camera; he writes as a public personality —a relief after so much anonymous prose— and one who has the best interests of his audience at heart. All this is as it should be, for his subject is a painter who has himself been transformed into a major personality. As Berger

says, 'His name is known to those who could not name their own Prime Minister.' Picasso has taken his place with Freud, Einstein, Churchill, Kennedy, Hitler and Stalin—he is part of modern history; you don't have to know anything about art to know about him. So the publicity that. has accompanied Berger's book is based on the Oedipal relish we all feel when a giant is cut down to size.

Granted, it's high time someone pointed out the failings. Picasso has reigned unchallenged on a serious level, at least since the last war, nearly since the first. He and his work are sur- rounded by a continual barrage of obsequious- ness: there are adulatory movies and memoirs and intimate records—the latest, by the photo- grapher Edward Quinn,t is a kind of expensive, souped-up family album, fascinating yet somehow pointless; there are dozens of marvellous picture- books with inert commentaries—Picasso's World of Children,$ by Helen Kay, is both beautiful and depressingly typical. He reigns, as Berger says, 'like a king,' progressing with his court, his baggage and his buffoons through his scat- tered châteaux and villas (he has as many elegant properties scattered across France as the average millionaire has Picassos). Everything he does is taken with owlish seriousness. His admirers may talk lovingly of his jokes, but are reluctant to admit that they are often in doubtful artistic taste. Yet since 1917, when he collaborated with Cocteau and Diaghilev in Parade, he has been mixed up with occasional frou-frou that has nothing to do with his genius. He has encouraged the flattering myth of himself as the eternally young, eternally creative, eternally potent and mysterious genius; he has encouraged the potters of Vallauris by his casual doodling on ceramics (he uses them like sketch pads). Unlike most geniuses, he has never dried up, but although he has gone on working relentlessly, he has in- evitably had periods when he has produced nothing of great importance.

Berger hammers all this home remorselessly enough. if he is sometimes unfair, it is, he makes you feel, more in sorrow than in anger. If he is sometimes downright misleading—in suggesting that Picasso has produced nothing of real seriousness since 1944 and largely wasted the 1920s (how about the variations in 1921 on The Three Musicians? Or the crucial and superb Three Dancers of 19257)—well, he is misleading in the service of a theory. It is a Marxist theory of the inexorable corruption of the arts in a com- petitive bourgeois society, where the standards are cash and fame. According to Berger, Picasso began as a prodigy and developed only beyond that ambiguous virtue in two isolated periods: first, during the spell that began in 1907 with Les Demoiselles d'Avignon, and continued through the days of pure Cubism when he collaborated with Braque and writers like Jacob and Apol- linaire; this ended with the First World War; second, from 1930 to 1944, when the combination of a peculiarly deep and satisfying affair, plus the Spanish Civil War and the Nazi occupation

Why these two periods above all others, apart from the fact that any theory that didn't account for Les Demoiselles and Guernica is plainly inadequate? The answer lies in Berger's Marxist view of History, Progress and the Artist's Position in European society. As be sees -him, Picasso, a permanent exile from his native Spain, erupted into cosmopolitan France as 'a vertical invader' (the phrase is Ortega y Gasset's). That is, despite his middle-class intellectual family, he drew his psychic strength and habits from the primitive, violent, self-stultifying,. anarchic Spain of the late nineteenth century. Thus he has always been isolated from the intricate society of his adoption. However sophisticated his tech- niques, his genius lies in his direct, intuitive con- tact with his unmodified, unsocialised instincts; it is sensual, a-social, and intensely subjective.

Picasso, then, has been doomed to perpetual isolation, a deprived, deified millionaire. Only twice has he broken out of this claustrophobic freedom: once as a Cubist, once under the spell of his affair with Marie-Therese Walter. Berger has an' ingenious theory of Cubism as 'the only example of dialectical materialism in painting,' fusing 'Courbet's materialism' with `Cezanne's dialectic':

This, he feels, somehow fits in with Faraday's and Maxwell's conception of the electro-magnetic field, with Planck's Quantum Theory and Ein- stein's Relativity, with Niels Bohr's theory of complementarity and Heisenberg's Uncertainty Principle. All centre on the idea of the indi- visibility of nature; mysteriously, ineluctably, the world connects up. Similarly, Marx's view of the historical inevitability of socialism is a kind of political Quantum theory, based on a belief in the indivisibility of mankind, despite the class system. Hence Cubism, Marxism and post- Newtonian physics are all of a piece throughout.

It is a clever idea, if you don't push it too far. But its connections with Picasso's Cubism are tenuous, particularly since Berger allows him small share in the formal achievement. By paint- ing Les Demoiselles he simply and unwittingly 'provoked' the style; it was Braque who saw the formal possibilities. What Picasso got out of r it, and what made him suddenly flower into major art, was a social connection: He became part of a group who, although they did not 'formulate a programme, were all working in the same direction. . . . It was . . . a period of inner certainty and security. It was, I believe, the only time when Picasso felt entirely at home.

Picasso, that is, in his life more than in his paintings, was demonstrating the indivisibility of the art-world.

Berger makes a curious connection between all this and Picasso's second blossoming. When he was obsessed with Marie-Therese Walter he was the reverse of 'part of a group.' Instead, his theme became what Berger calls 'the mar- vellous shared subjectivity of sex,' a pre- occupation with physical sensations so strong and deep that they destroy all objectivity.' In short, he lost his sense of isolation a second time in his sexual absorption with a woman.

There is, 1 think; something fundamentally tricksy about this argument. It is a question of tone. As a critic, Berger has a con- siderable impressionist gift for re-creating the sense of a picture; he is also clever, though conventional, in his handling of Marxist dialec- tic. But in both activities he employs a constant excess of feeling. The feeling, 1 mean, is a per- sonal mannerism which exists over and above the subject. This is parodied in his, to me, unfortunate television manner, which I find cloy- ing and over-intimate, as though seduction were the better part of communication. In his writing this is held more in control; but the excessive- ness is still there. For all his brilliance, Berger is a sentimentalist, and what he sentimentalises above all is the ideal of solidarity. So it makes sense that Picasso's genius should flower most for him only when working with a mutually supporting group of artists or when involved in a mutually satisfying love-affair. For, as Berger describes them, there seems no essential differ- ence between the lover's 'marvellous shared sub- jectivity of sex' and the Marxist's 'true fraternal sense of solidarity.' In these circumstances, revo- lutionary 'fraternity' sounds oddly like Eisen- hower's 'togetherness.'

The confusion would hardly matter if Berger didn't make it central to his criticism of Picasso's achievement. He allows him his genius, his integrity, hiS despair, but he flails him for his lack of a 'subject.' To Picasso, exile and 'vertical invader' of a society he is indifferent to, nothing is given, everything has to be mined pain- fully out of his own self. This is partly true, and it is in this process that Picasso foreshadows the whole internal migration of modern art, as it is driven to the periphery of mass culture, rewarded, praised but 'alienated.' Hence, though Picasso's genius may be characteristic of our time, Berger feels it is wrongly so. And this, perhaps, says more about Berger's criteria than Picasso's genius, for only relatively minor artists like Leger and Siqueiros seem to fill his bill. Yet, Paradoxically, of all modern masters, Picasso comes closest to Berger's ideal, largely because he is, above all, a maker of statements. Unlike the abstract painters, he is rarely more than mar- ginally concerned with colour. His greatest works, like Gteernica, are in black and white—the colour of print, the colour of statements. Indeed, one of his crticial contributions has been to develop Cubism away from its formal, rather intellectual beginnings and use it as a direct expression of reality as he understands it. So where Berger damns many of Picasso's distortions as 'absurd' he could equally easily see them as social com- ment. When Picasso parodies Velazquez's Las Menittas he is showing what has happened now to all that calm and dignity and sense of order: it has become disjointed, distorted, colourless, ludicrous, violent. This is applied Cubism, Cubist social criticism.

But Berger won't allow this:

In front of Nude Dressing her Hair, we never get beyond the violence that each part does to the next. No emotion develops because it is short-circuited by shock. . . . A woman's body by itself cannot be made to express all the horrors of fascism. But Picasso clung to this subject because, at the moment of fear and crisis, it was the only one of which he felt certain.

At this point the 'absurdity' comes home to roost on Berger himself. Following the fulfilled sensuality of the Marie-Therese paintings, Picasso expresses his rage against 'the horrors of fascism'

s in Nude Drersing her Bair by doing violence to all the values he has previously so beauti- fully created. He has given 'the horrors of fascism' precisely the emotional reality which that tired cliché lacks.

Yet I suspect that, for all his cleverness and insight, Berger fundamentally prefers the cliches of the Marxist view of history and brotherhood to Picasso's shocked and original vision. The reason is not because he is immune to new ideas --he is full of them himself—but because he is a sentimentalist. And the essence of sentimen- talism is to reduce—or inflate—all feelings to one comfortable commonplace. So though he cuts helpfully through much of the nonsense surrounding the master, he leaves the genius of the man untouched. It lies in the certainty of Picasso's intuitions, and his refusal to put in their place any prefabricated answers, however reassuring, however theoretically impeccable.