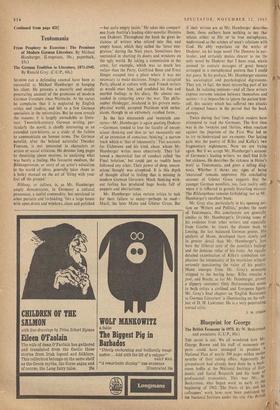 SELDOM can a defending counsel have been as successful as Michael Hamburger in hanging his client. He presents a masterly and deeply penetrating account of the premisses of modern German literature since Nietzsche. At the outset he complains that it is neglected by English critics and readers, and left to a few German specialists in the universities. But he soon reveals the reasons; it is largely unreadable as litera- ture. Twentieth-century German writing, par- ticularly the novel, is chiefly interesting as an extended case-history, as a study of the failure to communicate on human terms. The German novelist, after the belated naturalist Theodor Fontane, is not interested in characters or action or social criticism. He devotes long pages to theorising about motives, to 'analysing what was barely a feeling. His favourite medium, the Bildungsroinan, or story of an artist's education in the world of ideas, generally takes shape as

bulky manual on the art of `living with your feet off the ground.'

Bildung, or culture, is, as Mr. Hamburger amply demonstrates, in Germany a cultural possession, a useful commodity, but unrelated to other pursuits and forbidding, 'like a large house with open doors and windows, clean and polished —but quite empty inside.' He takes this compari- son from Austria's leading elder-novelist Heimito von Doderer. Throughout the book he gives in- stances of writers who retired into this vast empty house, which they called the 'inner emi- gration,' during the Nazi years. Sometimes they succeeded in shutting its doors and windows on the ugly world. By taking a commission in the army, for example, which was so much less vulgar than the Party, Gottfried Benn and Ernst Ringer escaped into a place where it was not necessary to make decisions. flinger, in occupied Paris, played at culture with such French writers as would meet him, and confided his fine and morbid feelings to his diary. He almost suc- ceeded in conjuring away the war. The philo- sopher Heidegger, insulated in his private meta- physical world, accepted Nazidom with enthu- siasm, though in an extremely rarefied form.

In the late nineteenth and twentieth cen- turies—Mr.,Hamburger is again quoting Doderer —Germans tended to lose the faculty of uncon- scious thinking and thus to 'act incessantly out of an extension of conscious thinking,' a narrow track which is `that of inhumanity.' This accounts for Eichmann and his kind, about whom Mr. Hamburger writes most objectively. They fol- lowed a theoretical line of conduct called 'the Final Solution,' but could just as readily have followed any other. Their power of deep, uncon- scious thought was atrophied. It is this depth of thought allied to feeling that is missing in modern German literature. Much thinking with- out feeling has produced huge books full of puppets and abstractions.

Mr. Hamburger takes certain critics to task for their failure to enjoy—perhaps to read- Musil, the later Mann and Gunter Grass. But if their virtues are as Mr. Hamburger describes them, these authors have nothing to say that relates either to life or to true metaphysics, understood as the science of man's relations with God. He ably expatiates on the works Of

Doderer, on his huge novel The Demons in par-

ticular, and certainly makes clearer to me the only novel by Doderer that I have read, which seemed to contain passages of great beauty arranged in a metaphysical pattern that I could not guess. In his preface, Mr. Hamburger excuses his sociological and psychological digressions.

They are, in fast, the most interesting park of his book. In isolating tensions—and all these writers express extreme tension between themselves and society—it is impossible to ignore the patient him- self, this society which has suffered two attacks of criminal lunacy in the period that the book surveys.

Twice during that' time, English readers have attempted to read the Germans. The first time was in the 'twenties and 'thirties, when reaction against the jingoism of the First War led us to try to understand our ex-enemy. Our lasting gain was the poetry of Rilke and Kafka's two fragmentary nightmares. Now we are trying again. But if we accept Mr. Hamburger's account of Germany's leading writers, we shall find little but sickness. He describes the sickness in Heine's workl. as Teutomania, and gives a telling diag- nosis. Whether it shows any signs of being `exorcised' remains unproven. His concluding account of Giinter Grass suggests that the younger German novelists, too, face reality only when it is reflected in grossly 'distorting mirrors. The Bildungshaus remains forbidding; not so Mr. Hamburger's excellent book.

Mr. Gray also, particularly in his opening sec- tion on `Writers and Politics,' probes the roots of Teutomania. His conclusions are generally similar to Mr. Hamburger's. Drawing some of his evidence from other writers and especially from Goethe, he traces the disease back to Lessing, the last balanced German genius. His analysis of Mann, developed more slowly and in greater detail than Mr. 'Hamburger's, lays bare the illiberal core of the novelist's feelings and the dubious value of his irony. An equally detailed examination of Rilke's symbolism em- phasises the inhumanity of his mysticism withput seriously questioning the value of his poetry. Mann emerges from Mr. Cray's screening stripped to the boring bone; Rilke remains a poet, and Brecht, as for Mr. Hamburger, proves a slippery customer. Only Hofmannsthal seems to both critics a civilised and European figure. Mr. Gray's final chapter on 'English Resistance to German Literature' is illuminating on the sub- ject of D. H. Lawrence. He is a very penetrating textual critic.