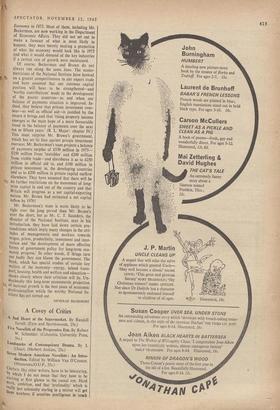 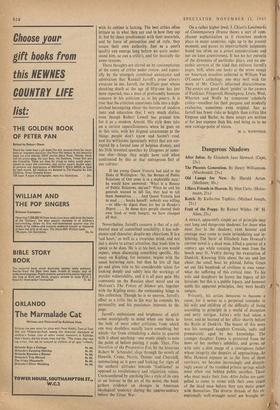 A Covey of Critics

CRITICS, like other writers, have to be interesting, by which I do not mean that they have to be exciting at first glance to the casual eye. Hard work, ambition, and that `profundity' which is really just solemnity staring in a mirror will get them nowhere if sensitive intelligence in touch with its subject is lacking. The best critics often irritate us in what they say and in how they say it; but by sheer involvement with their materials, and by force of perception and of style, they create their own authority. Just as a poet's quality can emerge long before we quite under- stand him, so can a critic's, and for basically the same reasons.

These thoughts are stirred up by contemplation of the covey of critics under review, and especi- ally by the strangely combined annoyance and admiration that Randall Jarrell's prose always awakens in me. Jarrell, the brilliant poet whose shocking death at the age of fifty-one has just been reported, was a man of profoundly humane concern in his criticism as in his poetry. It is true that the criticism sometimes falls into a high- pitched haranguing about the horrors of modern taste and education that I very much dislike, even though Robert Lowell has praised him for it as a modern Arnold. His style does take on a certain superciliousness when he goes on in this vein, with his feigned amazement at the things people don't know and haven't read, and his witticisms (genuinely witty) that are cor- rupted by a forced tone of helpless dismay, and his little invented speeches by Diogenes or some- one else—things they might have said when confronted by this or that outrageous fact of our culture:

If the young Queen Victoria had said to the Duke of Wellington: Sir, the Bureau of Public Relations of Our army is in a deplorable state,' he would have answered: 'What is a Bureau of Public Relations, ma'am?' When he and his generals wanted to tell lies, they had to tell them themselves. . . . And Queen Victoria had to read . . . books herself: nobody was willing —or able—to digest them for her in Reader's Digest. . , . In those days people chewed their own food or went hungry; we have changed all that.

Nevertheless, Jarrell's concern is that of a cul- tivated man of committed sensibility; it has sub- stance and character, despite my objections. It is a `sad heart,' as well as a vivacious mind, and not just a desire to attract attention, that leads him to speak as he does. He is at his best, as one would expect, when discussing something specific. His essay on Kipling, for instance, begins with the usual hectoring note, but then he lets all that go and gives rein to his considerable talent for looking deeply and subtly into the workings of psychic vulnerability, and it is all pure gain. His comments on the Russian short novel and on Malraux's The Voices of Silence are, together with the Kipling essay, the outstanding things in this collection. Though he is so uneven, Jarrell's effect as a critic lies in the way he commits his personality and his passionate interests to the page.

Jarrell's enthusiasm and brightness of spirit come nostalgically to mind when one turns to the bulk of most other criticism, from which one may doubtless usually learn something, but which—far from stimulating a desire to quarrel with it about anything—one wants simply to note the point of before putting it aside. Thus, Five Novelists of the Progressive Era, by the historian Robert W. Schneider, slogs through the novels of Howells, Crane, Norris, Dreiser. and Churchill, summarising as it goes and looking for signs of the authors' attitudes towards `traditional' as opposed to revolutionary and relativistic values. Unencumbered by anything like a style of its own or an interest in the art of the novel, the book gathers evidence on changes in American ideological tendency during the quarter.century before the Great War. On a rather higher level, J. Chlares Landmarks of Contemporary Drama shows a sort of com- placent sophistication as it examines modern plays in many countries, right up to the present moment, and passes its imperturbable judgments based too often on a priori considerations and not on keen attentiveness. It has no hot pursuits of the dynamics of particular plays, and no em- pathic apercus of the kind that enlivens Jarrell's pages. Still, when one looks at the seven essay on American novelists collected in William Van O'Connor's anthology, one may well wish for more of Mr. Chiari's informed discursiveness. The essays are good short `guides' to the careers of Faulkner, Fitzgerald, Hemingway, Lewis, West, Wharton and Wolfe by competent scholarly critics—excellent for their purpose and modestly evaluative, sometimes even original. Just as Jarrell has fewer risks or heights than critics like Empson and Burke, §o these essays are written at far less expense than his, and bring us to no new vantage-point of vision.