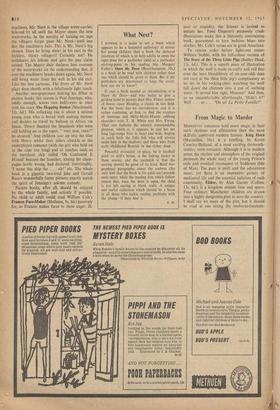 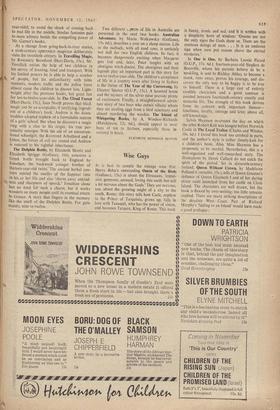 From Magic to Murder

MEDIAEVAL romances hold more magic in their stark rhythms and alliteration than the most skilfully contrived modern fantasy. King Horn (Macmillan, 16s.) is a retelling, by Kevin Crossley-Holland, of a most exciting thirteenth- century verse romance. Although it is in modern prose, the rhythm and atmosphere of the original permeate the whole story of the young Prince's exile and eventual reconquest of Suddenne (Isle of Man). The pace is swift and the adventures many, yet there is an impressive picture of mediaeval life and the essential isolation of each community. Elidor, by Alan Garner (Collins, 13s. 6d.), is a kingdom outside time and space. Four ordinary Manchester children are drawn into a highly dangerous plan to save the country. I shall say no more of the plot, but it should be read at one sitting (by twelve-to-fourteen- year-olds), to avoid the shock of coming back to real life in the middle. Similar fantasies pale to mere whimsy beside the compelling power of Mr. Garner's books. '

As a change from going-back-in-time stories, a sixth-century apprentice magician deliberately visits the twentieth century. In Travelling Magic, by Rosemary Beresford (Hart-Davis, ,15s.), Mr. Trevillick enlists the help of two children in his survey of housing, food and transport. With ithis limited powers he is able to help a number I III of people, but his unfamiliarity with table manners, modern traffic and the police force alinost cause the children to disown him. Light- weight after the previous books, but great fun for ten-to-twelve-year-olds. In The Clbud Forest (Hart-Davis, 15s.), Joan North proves that black magic can be an acceptable, if terrifying, ingredi- ent of a children's book. Andrew is the down- trodden adopted nephew of a formidable matron of a girls' school. But when he discovers a magic ring with a clue to his origin, his true per- sonality emerges. With the aid of an unconven- tional schoolgirl, the Reverend Arbuthnot and a kitten, the forces of evil are routed and Andrew is restored to his rightful inheritance, The Dolphin Bottle, by Elizabeth Muntz and Elizabeth Sprigge (Gollancz, 16s), concerns a Greek bottle brought back to England by Jonathan, the backward younger brother of thirteen-year-old twins."-The ancient herbal con- tents remind the smeller of the happiest time in his ,or her life and also 'charm away unkind- ness, and sharpness of speech.' Jonathan alone has no need for such a charm, but it works wonders on many people until its eventual return to Greece. A story that lingers in the memory like• the smell of the Dolphin Bottle. For girls mainly, nine to twelve. Two different t...,pects of life in Australia are presented in the next two books. Australian Adventure, by Maria Wolkowsky (Gollancz, 13s. 6d.), describes a year on a sheep station. Life in the outback, with all mod cons, is certainly not dull for two English children. In fact, it becomes dangerously exciting when Margaret gets lost and, later, Peter tangles with an aborigine witch-doctor. The aborigines and their legends play an important part in this story for ten-to-twelve-year-olds. The children's acceptance of life in a country town after living in Sydney is the theme of The Year of the Currawong, by Eleanor Spence (O.U.P., 15s.). A haunted house and the mystery of the silver mine provide plenty of excitement. Finally, a straightforward adven-' ture story of two boys who outwit villains whom they see stealing eggs from a bird sanctuary and almost murdering the warden. The Island of Whispering Rocks, by A. Windsor-Richards (Hutchinson, 12s. 6d.), should appeal to most boys of ten to thirteen, especially those in- terested in boats.