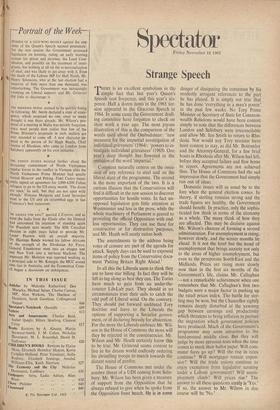 Page 3, 12 November 1965 — Portrait of the Week— STORIES OF A LEFT-WING REVOLT against
Close

Portrait of the Week— STORIES OF A LEFT-WING REVOLT against

the con- tents of the Queen's Speech seemed premature: for the new session the Government promised legislation on housing, rating, an early warning system for prices and incomes, the Land Com- mission, and possibly on the treatment of immi- grants, but nothing at all on the re-nationalisation of steel, and was likely to get away with it. Even the death of the Labour MP for Hull North. Mr. Henry Solomons, who at the last election had a majority of little more than one thousand, was unperturbing. The Government was increasingly counting on Liberal support, and Mr. Grimond did little to discourage it.

THE RHODESIA SERIAL seemed to be quickly losing

its following. Mr. Smith declared a state of emer- gency, which surprised no one, since so many thought it was there already. Mr. Wilson's pro- posal of a meeting in Malta was quickly forgotten, since most people now realise that few, of the Prime Minister's proposals in such matters are ever intended to come off. A new character en- tered in the person of Sir Hugh Beadle, Chief Justice of Rhodesia, who came to London from Salisbury apparently on his own initiative.

THE UNITED STATES worried further about the Increasing commitment of North Vietnamese regular forces to the conflict in Vietnam after the North Vietnamese Prime Minister had quietly visited Moscow and Peking. Fidel Castro mean- ly while signed an agreement for 3,000-4,000 Cuban refugees to go to the US every month. 'The doors are open,' he said, 'but they are not open wide enough.' Princess Margaret and Lord Snowdon went to the US and ate scrambled eggs in San Francisco's best restaurant.

'DC GAULLE FOR LIFE?' queried. L'Express, and so went the leaks from the glysde after the General had announced his intention of standing again for President next month. The fifth Canadian election in eight years failed to provide Mr. Lester Pearson with an overall majority. Dr. Hastings Banda warned his fellow Africans of the strength of the Rhodesian Air Force. General Eisenhower went into an oxygen tent and New York into a ten-hour blackout. The unperson Mr. Molotov was reported working as a principal aide to Mr. Kosygin, the MCC scored runs fast in Australia, and the Ecumenical Coun- cil began a discussion on indulgences.