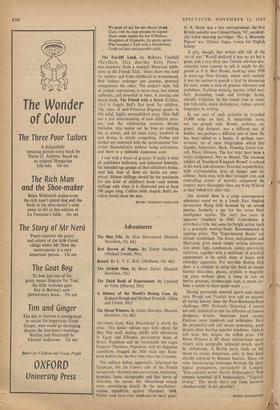 The Blue Nile. By Alan Moorehead. (Hamish Hamilton, 12s. 6d.) Bert Brown of Papua. By Garry Saunders. (Michael Joseph, 30s.) Brunel. By L. T. C. Rolt. (Methuen, 13s. 6d.) The Third Book of Experiments. By Leonard de Vries. (Murray, 16s.) ANYTHING from Alan Moorehead is worth the price. This junior edition says little about the Blue Nile itself, dealing chiefly with adventures in Egypt and Ethiopia, particularly those of Bruce, Napoleon and the formidable but tragic Emperor Theodore. Napoleon, with his Egyptian expedition, dragged the Nile back into Euro- pean politics for the first time since the Crusades.

Not military defeat, apparently, infuriated the Egyptians, but the Unesco side of the French occupation: decimals and excavations, sanitation, hospitals, taxes, cartography and that terror of illiterates, the census. Mr. Moorehead reveals many entertaining details. In the neo-Palmer- stonian expedition against Theodore, 1868, Napier used forty-four elephants to carry gunS; G. A. Henty was a war correspondent; the first British casualty was Colonel Dunn, VC, accident- ally killed shooting partridges. 'No. 1, Heavenly Pigeon' was Chinese lingua franca for English bishop.

A pity, though, that writers still talk of the `art of war.' Wavell declared it was no art but 'a game, and a very dirty one. Certain old-time mis- sionaries were content to sell It might be dis- guised as It is. Bert Brown, working since 1938 in stone-age New Guinea, where until recently it was the custom to punish a thief by devouring his cook, seems a man of genuine tolerance and usefulness. Tackling malaria, leprosy, tribal war- fare; promoting roads and airstrips, farms, schools, irrigation, he has found time to trans- late folk-tales, make dictionaries, reduce several languages to writing.

In one year of such activities he travelled 14,000 miles on foot. A remarkable story, not too piously told. Brunel, architect, en- gineer, ship designer, was a different sort of builder, not perhaps a different sort of man. He has been added to a handy, if perhaps over- virtuous, set of short biographies which lists Gandhi, Schweitzer, Bach, Fleming, Lewis Car- roll, More, Dickens. The last must have been a tricky assignment. Not so Brunel. The resonant solidity of 'Isambard Kingdom Brunel' is echoed in his work and character. Personal responsibility, bold craftsmanship, love of danger and ex- cellence. Such men, with their wrought iron, and controlling armies of navvies, conquered the country more thoroughly than any King William as they linked city after city.

The Airfield Man is a crisp contempora6f adventure novel set in a lonely East Anglian ex-wartime flying field haunted by an armed maniac, formerly a spy for the secret Naii intelligence service. The story has roots in apparent treachery in 1943. Coincidence is stretched a little, but some forthright action leads to a genuinely moving finale. Recommended to aspiring pilots. The 'Experimental Books' are already established. The latest, well-planned and illustrated, gives much simply written informa- tion about light, combustion, colour, electricity, radiation, together with a multitude of practic4l experiments to be safely done at home with everyday apparatus. For horrible Boxing Day there is a solution in using this book to manu- facture stalactites, ghosts, crystals, a magnify- ing glass without glass, a lamp to run on twelve potatoes, stroboscopic tops, a steam tur- bine, a candle to burn under water . . .

Having previously covered sports and classic cars, Hough and Frostick now add an account of 'racing history since the Paris-Bordeaux-Paris challenge, 1895. Profusely illustrated, it covers not only technicalities but the influence of famous designers, drivers, American track racing, Fascism, upon standards and techniques. Here the personality-cult still means something, great drivers often beating superior machines. Addicts will want this, despite the stiffish price. The Moon Winners is SF about international space rivalry with acceptable technical details spoilt by melodrama. A British party lands on the moon to rescue Americans, only to find them already captured by Russian fanatics. There alle some unconvincing exchanges between the ideci- logical protagonists, particularly in London. 'You capitalist worm' (Soviet Ambassador). 'You commie screwball' (US Ambassador). "Cap i la I- ist-dog." The words burst out from bet weeil clenched teeth.' Is this possible?