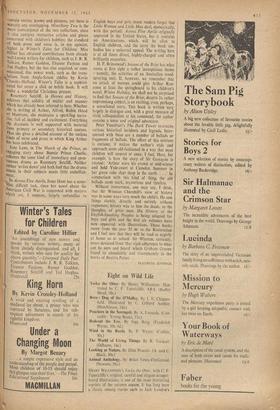 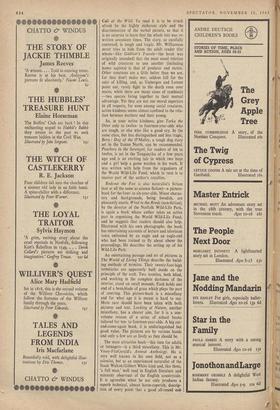 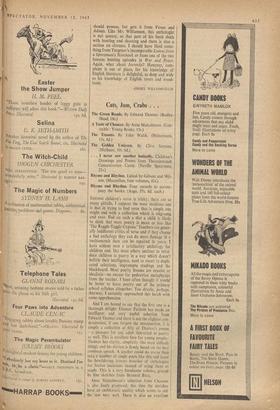 HENRY WILLIAMSON's Tarka the Otter, with C. F. Tunnicliffe's original, careful and elegant scraper: board illustrations, is one of the most interesting reprints of the autumn season. It has long been a classic among stories such as Jack London's Call of the Wild. To read it is to be struck afresh by the highly elaborate style and the discrimination of the verbal picture, so that it is no surprise to learn that the whole text was re- written seventeen times. The story, so carefully conveyed, is tough and tragic. Mr. Williamson never tries to hide from the adult reader (for whom—like Gulliver's Travels—the book was originally intended) that the most usual relation of wild creatures to one another (including homo sapiens) is that of predator and victim. Other creatures are a little better than we are, for they don't make war, seldom kill for the sake of killing, and, as Tinbergen and Lorenz point out, rarely fight to the death even over mates, while there are many cases of symbiosis —two species living together to their mutual advantage. Yet they are not our moral superiors in all respects, for even among social creatures, active kindness seems almost confined to the rela- tion between mothers and their young.

So, in your active kindness, give Tarka the Otter only to twelve- to fourteen-year-olds who are tough, or else who like a good cry. In the same class, but less distinguished and less tragic, Boru : Dog of the O'Malley, a tough dog story set in the frozen North, can be recommended. Poachers in the Serengeti, for readers of ten to twelve, is set in the Tanganyika of a few years ago and is an exciting tale in which two boys and a girl help a game warden in his work. It was written with help from the organisers of the World Wild-Life Fund, which in turn is to receive part of the author's royalties.

Redcoat the Fox is also naturalist's fiction (not at all the same as science fiction)—a picture- book for the four- to six-year-olds. Minor charac- ters and backgrounds, being Swedish, are pleasantly exotic. Wind in the Reeds (non-fiction), by the director of the Norfolk Wild-Life Park, is again a book whose author takes an active part in organising the World Wild-Life Fund, and he suggests that readers should also help. Illustrated with his own photographs, the book has entertaining accounts of lecture and television tours enlivened by an eagle and an eagle-owl who had been trained to fly about above the proceedings. He describes the setting up of his Wild-Life Park.

An entertaining passage and set of pictures in The World of Living Things describe the build- ing methods of termites. Their twenty-foot-high termitaries are apparently built inside on the principle of the arch. Two termites, both blind, and working in the complete darkness of the interior, stand on small mounds. Each holds one end of a bent.blade of grass which plays the part of centring. This picture-book is a miscellany and for what age it is meant is hard to say. More care should have been taken with both pictures and text. Looking at Nature, another miscellany, has a clearer aim, for it is a one- volume reissue of a series of school books tailored for ten- to fourteen-year-olds. A big cut- and-come-again book, it is undistinguished but good value. The pictures are by various hands and only a few are as lively as they should be.

The most attractive book—this time for adults or teenagers—is a third miscellany. This is Mr. Vesey-FitzGerald's Animal Anthology. He is very well known in his own field, not as a scientist, but as an experienced naturalist of the Izaak Walton/Gilbert White kind and, like them, `a full man,' well read in English literature and minutely observant of the English countryside. It is agreeable when he not only produces a superb technical, almost horse-coperish, descrip- tion of every point that a good all-round cob should possess, but gets it from Venus and Adonis. Like Mr. Williamson, this anthologist is not queasy, so that part of his book deals with hunting and shooting and there is also a section on circuses. I should have liked some- thing from Turgenev's incomparable Leaves from a Sportsman's Notebook or from one of the two famous hunting episodes in War and Peace. Again, what about Jorrocks? However, com- plaint is out of place, for his knowledge of English literature is delightful, as deep and wide as his knowledge of English rivers and wood- lands.