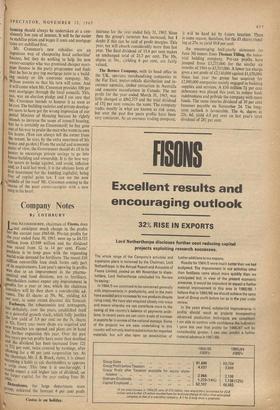 LORD NETHERTHORPE, chairman of Fisons, does not anticipate much change in the profits for the current year 1965-66. Pre-tax profits for the year ended June 30, 1965, were up to £4.537 million from £3.949 million and the dividend Was raised from 12 to 14 per cent. Fisons' Problem is to keep pace with the expanding World-wide demand for fertilisers. The recent £10 million convertible loan stock forms only part Of its requirements. Last year's upswing in profits Was due to an improvement in the pharma- ceutical and food divisions, not to fertilisers. Shareholders cannot expect any improvement in profits for a year or two, which the chairman considers will by then show a considerable ad- vance. The £1 shares at 59s. 9d., yielding 4.6 Per cent, to some extent discount this forecast. Forbuoys, the tobacconists and newsagents, has definitely, over the years, established itself as a pOwerful growth stock, which fully justifies the low yield of 3.9 per cent on the 5s. shares at 42s. Every year more shops are acquired and new branches are opened and plans are in hand for further expansion this year. Over the past r we Years pre-tax profits have more than doubled and the, dividend has been 'increased from 12+ I° 321 per cent, twice covered by earnings, after allowing for a 40 per cent corporation tax. As the chairman, Mr. J. B. Brock, states, it is almost uecorning a habit to ask shareholders to approve a scrip issue. This time it is one-for-eight. I W, mild expect a still higher rate of dividend, on the larger capital, for the year ending June 30, 1966.- Debenhams, the large department store group, achieved the forecast 4 per cent profit increase for the year ended July 31, 1965. Since then the group's turnover has increased, but I doubt if this can be said of profit margins. This year, tax will absorb considerably more than last year. The final dividend of 15.4 per cent makes an unchanged total of 21.7 per cent. The 10s, shares at 36s., yielding 6 per cent, are fairly valued.

The Borneo Company, with its head office in the UK, operates merchandising companies in the Far East, motor-vehicle distribution and in- surance agencies, timber extraction in Australia and concrete manufacture in Canada. The net profit for the year ended March 31, 1965, was little changed at £862,375 and the total dividend of 131 per cent remains the same. The company trades mostly in what are known as risk areas, but over the past five years profits have been very consistent. As an overseas trading company,

it will be hard bit by future taxation: There

An encouraging half-yearly statement (to June 30) comes from Thomas Tilling, the indus- trial holding company. Pre-tax profits have jumped from £3,275,000 for the similar six months of 1964 to £3,315,000. A lower tax charge gives a net profit of £2,140,000 against £1,670,000. Since last year the group has acquired for £2,880,000 companies mainly engaged in building supplies and services. A £10 million 7+ per cent debenture was placed this year, to reduce bank indebtedness and prdvide the company with more funds. The same interim dividend of 10 per cent becomes payable on November 24. The long- term outlook is favourable. The 4s. shares at 23s. 6d. yield 4.9 per cent on last year's total dividend of 281 per cent.