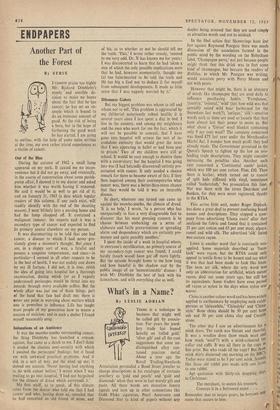 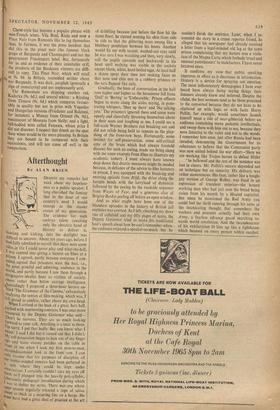 What's in a Name?

By LESLIE ADRIAN doubts being aroused that they are used simply as attractive words and not to mislead.

In the libel action that Showerings have just lost against Raymond Postgate there was much discussion of the association formed in the public mind by the wording on the Babycham label, 'Champagne perry,' not just because people might think that this drink was in fact some kind of champagne, but because the readers of Holiday, in which Mr. Postgate was writing, would associate perry with Perry Mason and not with pears.

However that might be, there is an armoury of words like champagne that are used daily to influence purchasing habits. 'Farmhouse,' `country,' oriental,"wild' (just how wild was that specially raised wild boar barbecued for the Snowdons last week?), `antique,' silk'—emotive words such as these are used so loosely that they have almost lost their power to move us. But what about a 'Union' wool blanket containing only 9 per cent wool? The company concerned was fined £75 last year under the Merchandise Marks Act. I wonder how much profit they had already made. The Government promised in the Queen's Speech to tighten up the law on mis- leading trade descriptions. They might consider increasing the penalties also. Another such case concerned a 'Continental suede' jacket, which was 100 per cent cotton. Fine, £10. Then there is leather, which turned out to consist of split hide stiffened with vinyl, sometimes called `leathercloth.' No prosecution this time. Nor was there with the terms Dearsken and Buxken, for they were never registered, thanks to the RTSA.

This active little unit, under Roger Diplock, has done a great deal to prevent confusing brand names and descriptions. They stopped a com- pany from advertising 'Llama coats' after they analysed the fabric and found that it contained 35 per cent cotton and 65 per cent wool, alpaca, camel and wild silk. The advertised 'silk' lining was acetate rayon.

Linen is another word that is constantly mis- applied. Some materials described as `linen- look' were rayon, but the RTSA •could only appeal to textile firms to be honest and say what it was that had been made to look like linen. The term art silk, where the arty word was only an abbreviation for artificial, which meant rayon, died out some years ago, but still has its equivalents. Some traders have even passed off rayon as nylon in the days when nylon Was scarce.

China is another colour word and has been widely applied to earthenware by employing such catch' phrases as `chinawhite,"Chinalyke' and 'China- style.' Bone china should be 50 per cent bone ash and 50 per cent china clay and Cornish stone.

The other day I saw an advertisement for 8 mink dress. The catch was blatant and cheerful. It was a woollen dress (how much wool and how much `wool'?) with a mink-coloured fur collar and cuffs. It was all there in the copY in fine print. But who reads all the copy? But thou mink shirts discussed one morning on the BBC,5 Today were stated to be 3 per cent mink. Sounds like those old rabbit pies made with one horse to one rabbit. Apt quotation with thirty-six shopping days to Christmas:

The merchant, to secure his treasure, Conveys it in a borrowed name . . • Remember that to secure yours, he borrows atlY name that occurs to him. Claret-style has become a popular phrase with non-French wines. Vila Real, Rioja and now a Pinot Noir from Rumania like to tag themselves thus. In fairness, it was the press handout that did this to the pinot noir (the famous black gripe of Burgundy and Champagne) and not the goyernment Fructexport label. But, fortunately for Its and as evidence of their inimitable skill, the 'Products of the Bordeaux vintners are diffi- cult to copy. This Pinot Noir, which will retail at 9s. 9d. in Britain, resembled neither claret nor Burgundy. It was dark, purplish (generally a sign of immaturity) and not unpleasantly acid.

The Rumanians are shipping another red, Kadarka (9s. 6d.), and several whites: a Riesling from Tirnave (9s. 6d.) which compares favour- ably in quality but not in price with Yugoslav and Hungarian versions (Friedauer and Balatoni, for instance); a Muscat from Ottonel (9s. 9d.), reminiscent of Moscato from Sicily; and a light, full-bodied wine called Feteasca, whose price I did not discover. I suspect that drunk on the spot these wines would be far more pleasing. In Britain they are bound to be compared with their equivalents, and will not come off well in the comparison.